[manasteel88 brings us this 2P Press Start post about a game many of us grew up with: Chip ‘n Dale Rescue Rangers. Check out our current call for Blogs, and start writing! — JRo]

Friendship is something we all take for granted. A good friend will be there for you time and time again. They’ll help you in your endeavors and be with you when it gets rough.

A bad friend will throw you off a ledge.

Don’t be a bad friend.

Chip ‘n Dale Rescue Rangers pioneered the co-operative platformer. It took the simple act of playing a video game with somebody and turned it into a test of friendship. Using a simple pick and throw mechanic, Capcom recreated Chip and Dale’s relationship perfectly in video game form.

The brothers began their lives as mischievous scamps who happened to have an affinity for Alphonse and Gaston lines. Causing trouble for ducks dressed as park rangers or dogs dressed as soldiers was a day to day occurrence for them.

Just because they shared the same tree however, doesn’t mean they were always the best of friends. Many of their pranks would wind up turning in to a Three Stooges style argument. Similar to many siblings relationships.

Chip ‘n Dale Rescue Rangers takes a bonk to the head and amplifies it by giving you the opportunity to push an ally off a ledge. Whether you do this maliciously or not, the opportunity for mischief is now presented to both players.

To bring this notion further, you are given a world full of boxes, apples, balls and more to throw at enemies. It is the only way to kill them. If your ally happens to get in the way however, he will be seeing stars for a few seconds. Immobilized and vulnerable, you have lost a life due to your friend’s careless throw.

These two simple mechanics can change a friendship in an afternoon.

I was an only child growing up, so even if my single player games had multiplayer, it was rarely utilized. Chip and Dale was a fun little game that I was able to run through and grow better and better at. However, on those occasions that I did have friends or family over to play with me, it turned in to something different.

Now let me be clear. I wasn’t always the instigator.

I was however the first one to figure out you can push people off a ledge. Something that turned in to a Pandora’s Box of creative mischief between the two of us.

At times it could be attributed to the boredom of playing 5 or so levels nicely together. Sometimes you just wanted to throw them off a bridge. If they were slowing you down, why not just pick the other person up and run through the rest of the level carrying them. There is nothing really stopping you from doing that.

Well except when the other person hits you with an apple. That stops you pretty quick. 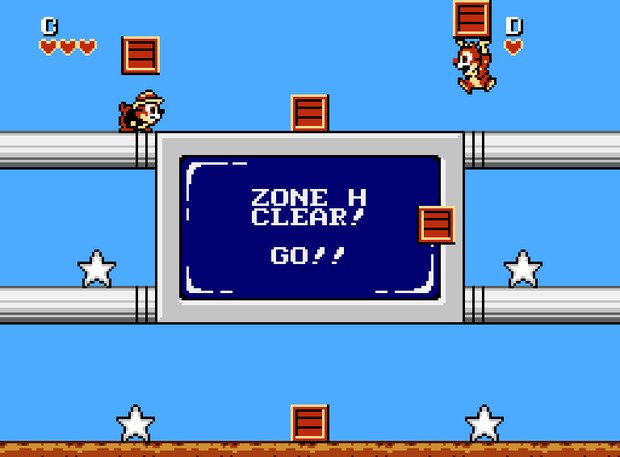 It never helped that each stage would end with a hidden 1up underneath a single box in a group of boxes that you have to compete over. Boxes are then thrown all around the screen, and always at each other. All for the goal of getting that extra life. As kids however, you never really let the competition die when the time ends.

It would always be carried on in to the next level until one of us actually caved in and decided to play the game fairly. Well, until somebody gets inadvertently hit by something. That’s when the vicious cycle repeats itself. 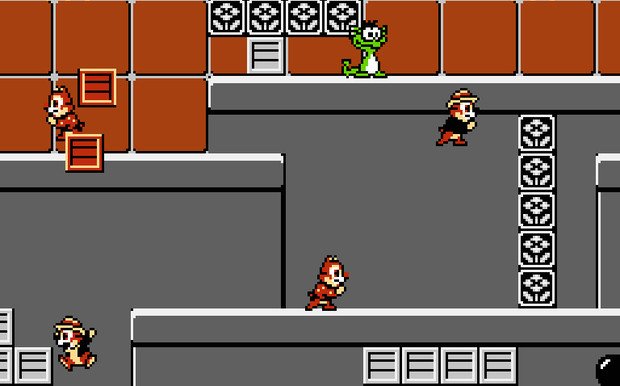 Chip ‘n Dale Rescue Rangers was a chance to exercise how far we could push one another’s buttons before it became too much for us. Sure, as a game in itself, it was a fun experience. It however is a much better show of competition. We could have just saved Gadget and beaten the game the fair way.

I don’t think that ever crossed our minds though.