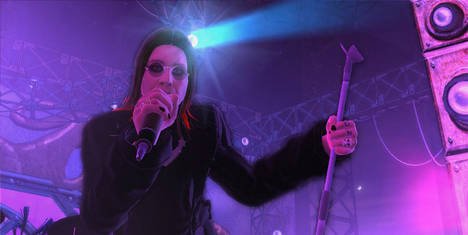 If you’ve ever had a fantasies about biting off a bat’s head or mumbling so unintelligibly so that everyone thinks you’ve been drunk for over twenty years straight, then this bit of news is going to be right up your alley. Activision announced today that Ozzy Osbourne will be a playable character in Guitar Hero World Tour. In addition, OZZfest will be an available venue in the game.

Since they’re bringing Ozzy into the game, it only makes sense that they add a couple of his songs to the track list. The much-requested “Crazy Train” has been confirmed, along with “Mr. Crowley,” both from the legendary album Blizzard of Ozz. New tracks have also been confirmed for OZZfest regulars Zakk Wylde, Metallica and System of a Down.

Not enough? No problem, there’s more. Activision dropped info on another seven tracks, too. At the Drive-In, Bob Seger and Silversun Pickups are among the offerings. Best of all, now I might have an excuse for all those times I’ve wandered around the house singing “Eye of the Tiger.” It was practice, honest!

Venture past the jump for a complete rundown of the new tracks announced today, as well as a list of previously confirmed songs. And, in our gallery, we have shiny new box art (PS3/360/PS2) awaiting your discerning appraisal.