Plus big changes for Roadhog, Reaper, and McCree

Today’s Overwatch patch brings some big changes to the game, apart from the new Horizon Lunar Colony map that’s now available on all three platforms. It seems that every major patch also tinkers with the hero balance, and this one’s no exception.

The biggest change is the welcome addition of a new map to the rotation. In Overwatch‘s lore, the Horizon Moonbase was a peaceful research facility working on all manner of scientific pursuits, including primate intelligence augmentation. We first saw the facility way back in March 2016 when the “Recall'” short film was released. Unfortunately, the monkeys became smart enough to question why they should be experimented on and overthrew the scientists, taking over the colony for themselves. It’s where Winston grew up, but he chose to side with humanity and left his fellow primates behind when he escaped to Earth.

The new map is an assault type with two capture points, similar to Volskaya Industries or the Temple of Anubis. Attackers begin in a room with an enormous telescope pointed at Earth, and every character has something to say when they look back at home. Most of the facility is indoors, but there’s a small section where the heroes can head outside. This section has lower gravity and muffled sound, and offers a significant change to the status quo. It’s a shame this section isn’t larger, as some interesting strategies open up when every jump takes you 30 feet in the air. Fortunately, low-gravity options are being added for those who want to experiment with the feature in custom games, and it’s also being added to the Arcade mode temporarily as a new brawl type.

In addition to the new map, a few tweaks were made to Roadhog, Reaper, and McCree. One’s better, one’s worse, and one stayed about the same.

Roadhog’s scrap gun was changed to hold five shots instead of four, and also fires 30% faster. To balance this, his damage per shot was reduced by 33%. This makes it much harder to perform his one hit kill combo, as most characters will have a sliver of health left even if they take the full brunt of the scrap gun. Even adding a quick melee attack to the combo will leave many opposing characters with a chance to escape, so Roadhog players will have to work more closely with their team to be effective. In a duel, Roadhog will want to do some damage before he brings a target close, and may need to change his strategy from just hook-fire to fire-hook-fire-melee to guarantee a takedown.

Reaper’s passive ability was changed. He’ll no longer be able to consume Soul Globes to restore hit points, instead recovering 20% of the damage he deals to opposing heroes as health. This makes him much more useful in 1v1 and 3v3 matches since he doesn’t have to wait for a kill to get some stamina back, and helps him stay alive when using his ultimate, especially when he manages to trigger it in the middle of a crowd.

The lifesteal doesn’t grant bonus health for overkill damage and isn’t granted when attacking barriers or constructs, though you can get it from any damage source, including a quick melee attack. With both of these changes going in at the same time, Roadhog may want to think twice about pulling Reaper in close since he’s far more likely to lose that battle. 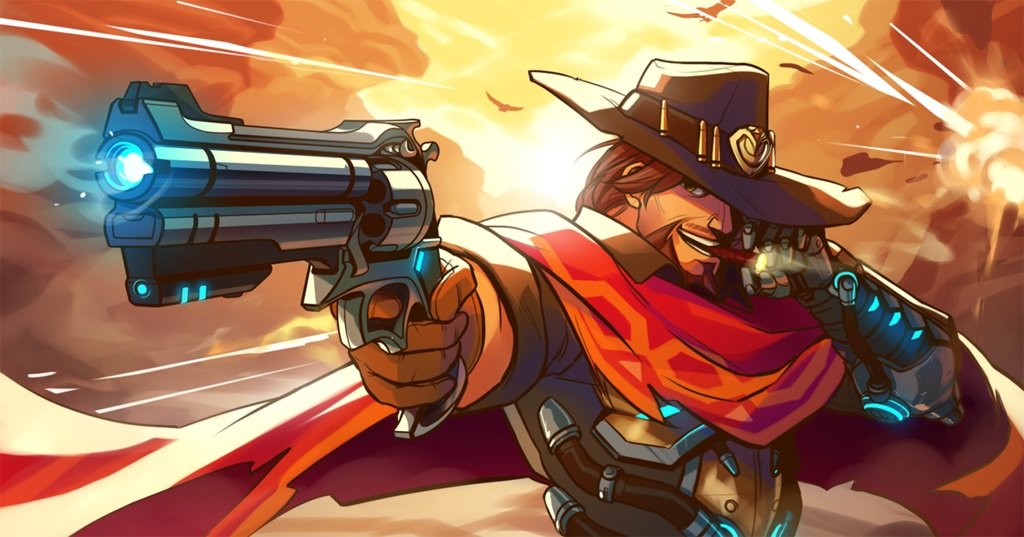 McCree by LifelessMech on DeviantArt

Finally, McCree got some welcome changes to his ultimate ability, Deadeye. When 12:00 rolls around, McCree sees a reticle that targets opposing players’ heads, and it takes more time to zoom in the more health that player has. The smaller the reticle, the more damage will be dealt to a character. With the change to Deadeye, McCree will zoom in on low-health characters much more quickly and will be able to do significant damage without having to stand out in the open for so long. This may help make him more effective against enemy Pharahs, though D. Va’s defense matrix is still the best counter to a Pharah/Mercy combo.

Although the new map is by far the biggest draw, the hero changes will certainly shake up the meta now that they’re live. Roadhog players will probably be pretty grumpy for the next couple of weeks, so I hope everyone’s in the mood for salted pork.