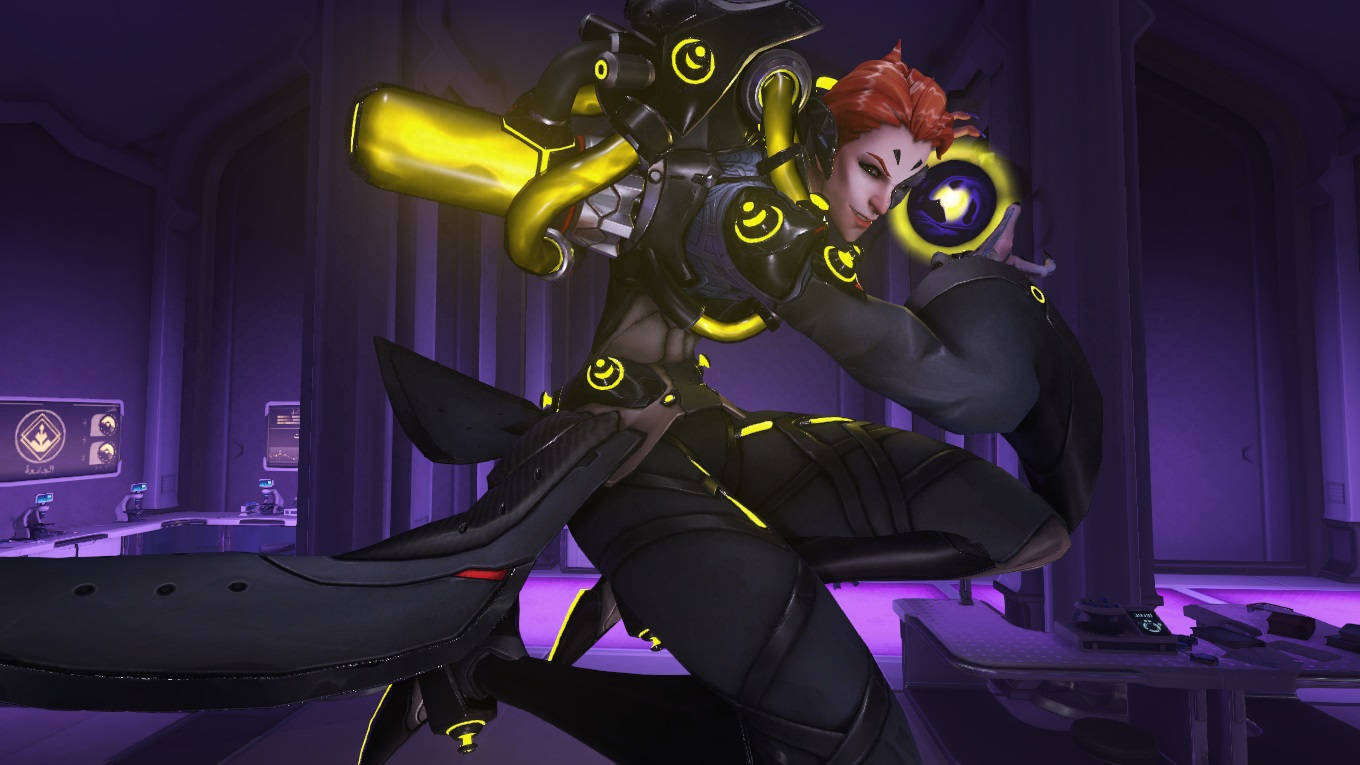 Overwatch‘s 26th hero Moira was revealed at Blizzcon last week, and she’s been available on the PC’s Public Test Realm (PTR) since Monday. I’ve been trying the vampiric biomancer out since then, and I’ll expand on her abilities below.

Moira is the first character since Ana to join the Support class, and she’s capable of dishing up some potent healing. She’s not as dedicated to helping her team as a Mercy though, and successful Moira players will have to find a balance between assisting their teammates and dealing damage to the opposition. She’s definitely got her own role to play, and her playstyle works better on certain maps and game modes than others. Let’s take a look at her kit. 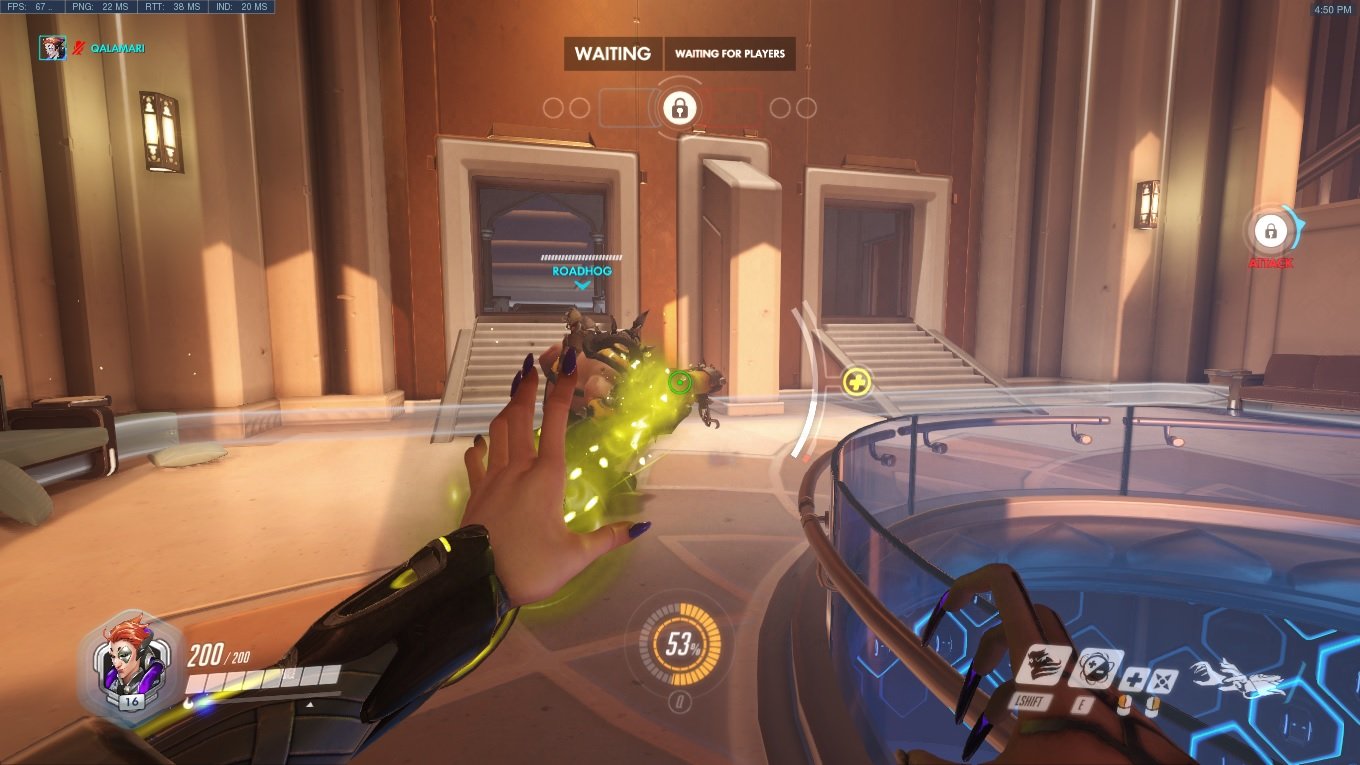 Moira’s primary and secondary fire are called Biotic Grasp and are attached to her left and right hands, with the right doing damage and the left restoring teammates’ health. She can’t heal constantly, and you’ll notice a meter to the right of center screen which shows how much longer she can keep the biotic spray active. This recharges very slowly unless she’s doing damage with her other hand, so it’s a bit less reliable than Mercy’s Caduceus staff. The healing stream has about the same range as Mei’s ice gun, and can penetrate barriers like Winston’s bubble or Reinhardt’s shield. It’s a fairly short-range effect, so Moira will need to stay close to her team to keep them all topped off.

Biotic Grasp will heal everyone in front of you as long as you’re sort of aiming at them, acting kind of like a healing version of Winston’s Tesla Cannon. It doesn’t matter how many players are hurt, they’ll all receive the same amount of healing. One thing I found interesting is that the spray continues healing a player briefly even after Moira has turned away from them, so there’s a little bit of heal-over-time effect. 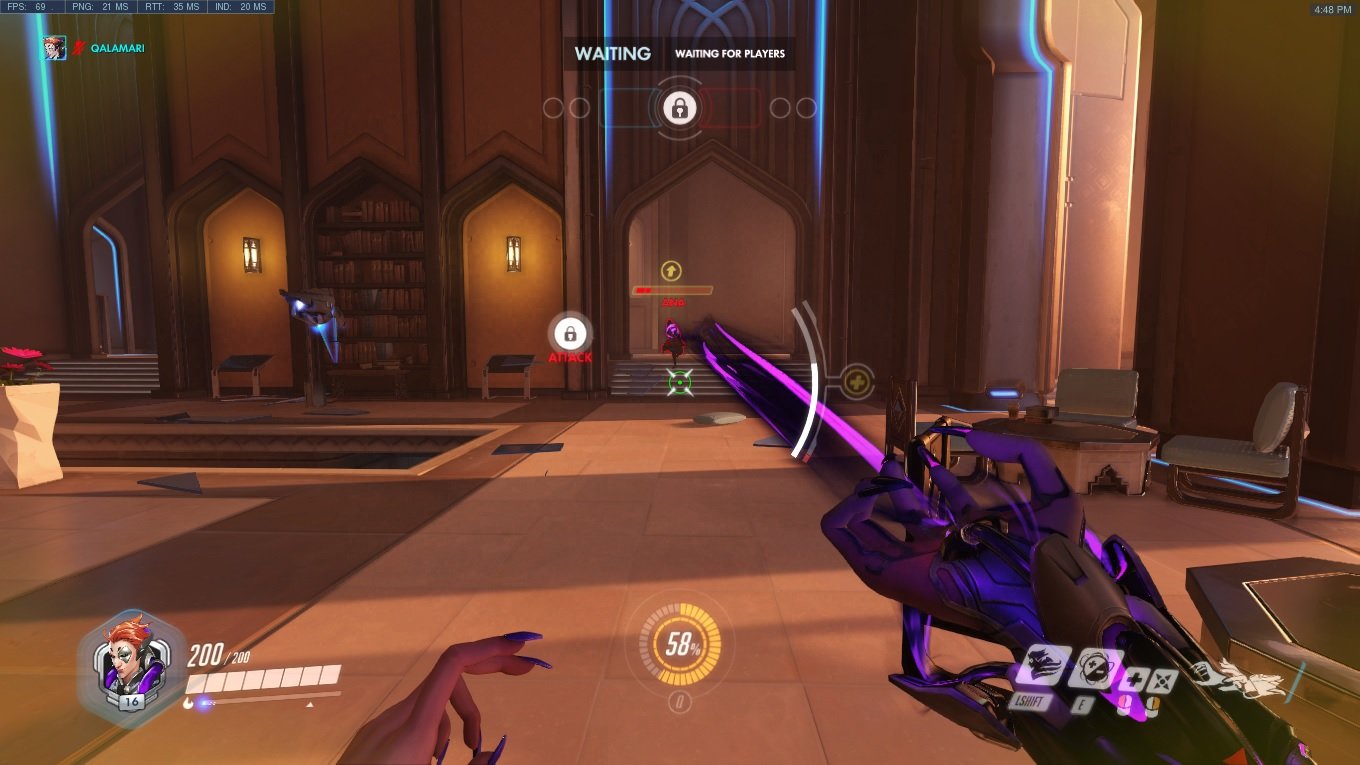 The harming effect of Biotic Grasp is where Moira will do most of her damage. Unlike the healing stream, this attack won’t penetrate barriers. The beam has a soft lock-on, not nearly as forgiving as Symmetra’s. It can reach a lot farther though, and maintaining the connection on enemies at a distance will require much better aim tracking. It’s more like a hitscan weapon than Symmetra’s beam, and does steady damage instead of getting more potent as you stay locked on. I was sort of surprised at how little damage the beam does; I was having difficulty dueling an AI Zenyatta using just this attack.

Dealing damage with Biotic Grasp has two benefits for Moira. Not only does it replenish the healing meter, it also drains health from her enemies if she’s been damaged. My testing indicated every two points of damage she deals comes back to her as one point of health. Because of this, her 200 HP maximum is a little deceptive, and she won’t be quite as easy to kill as some of her support brethren. Interestingly, there’s no reload or meter attached to the harmful version of Biotic Grasp, so she can basically keep using it forever. 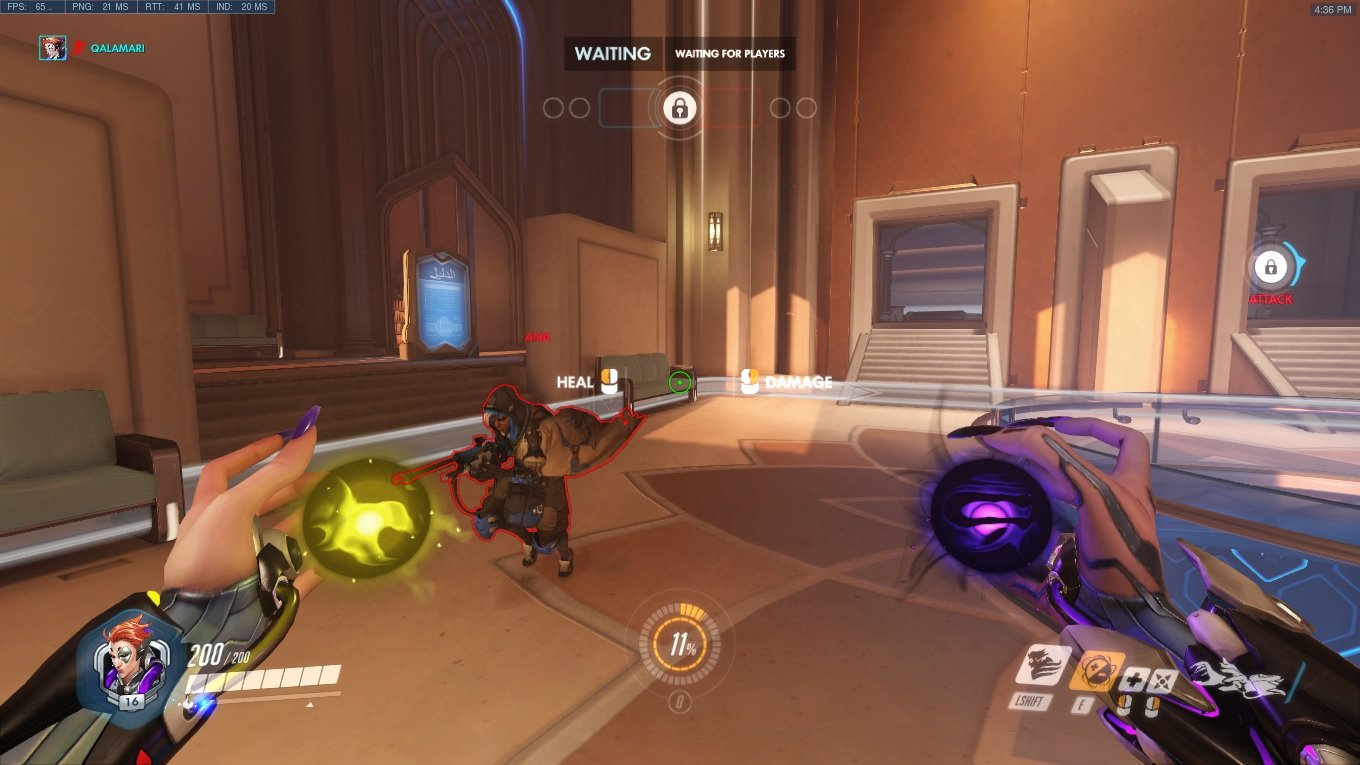 Moira’s Biotic Orb ability allows her to channel healing or damage into a ball and throw it wherever she likes every ten seconds, giving her a lot of versatility. A healing orb provides significant restoration to allies, and she can also follow it to heal herself. Fortunately, the healing orbs don’t have any effect on the healing meter used for Biotic Grasp. Orbs have a maximum amount of healing or damage they can do, and you can tell how much power an orb has left by how large it appears on screen.

Once thrown, the orbs will bounce off walls and other surfaces until they’re used up or the cooldown resets. If a player is in range, the orb will track them and slow down somewhat to make it easier to get the most out of it. When this happens, tendrils of positive or negative energy will lock onto nearby players, healing or harming them depending on which type of orb Moira decided to throw.

Like Symmetra’s energy ball, both the healing and harming Biotic Orbs pass freely through barriers. That said, a barrier can prevent the tendrils from the harmful orb from tracking players, so they’re not entirely useless. The orbs travel much more quickly than Symmetra’s, though they won’t do as much damage unless you manage to catch a player in a hallway or confined area where it’s harder to dodge. Both types of orbs share the same cooldown, so if you throw the wrong kind by mistake it’ll be a while before you can toss out another one.

Since it’s on such a long cooldown, Moira probably won’t end up using the damaging Biotic Orb as often as the healing version. It’s a shame, because the damage version can more than double her firepower, and the tendrils extending from the harmful orb provide her the same benefits as her damaging Biotic Grasp. Teams with multiple healers will be able to get far more utility out of Moira than those where she’s the only source of regeneration. 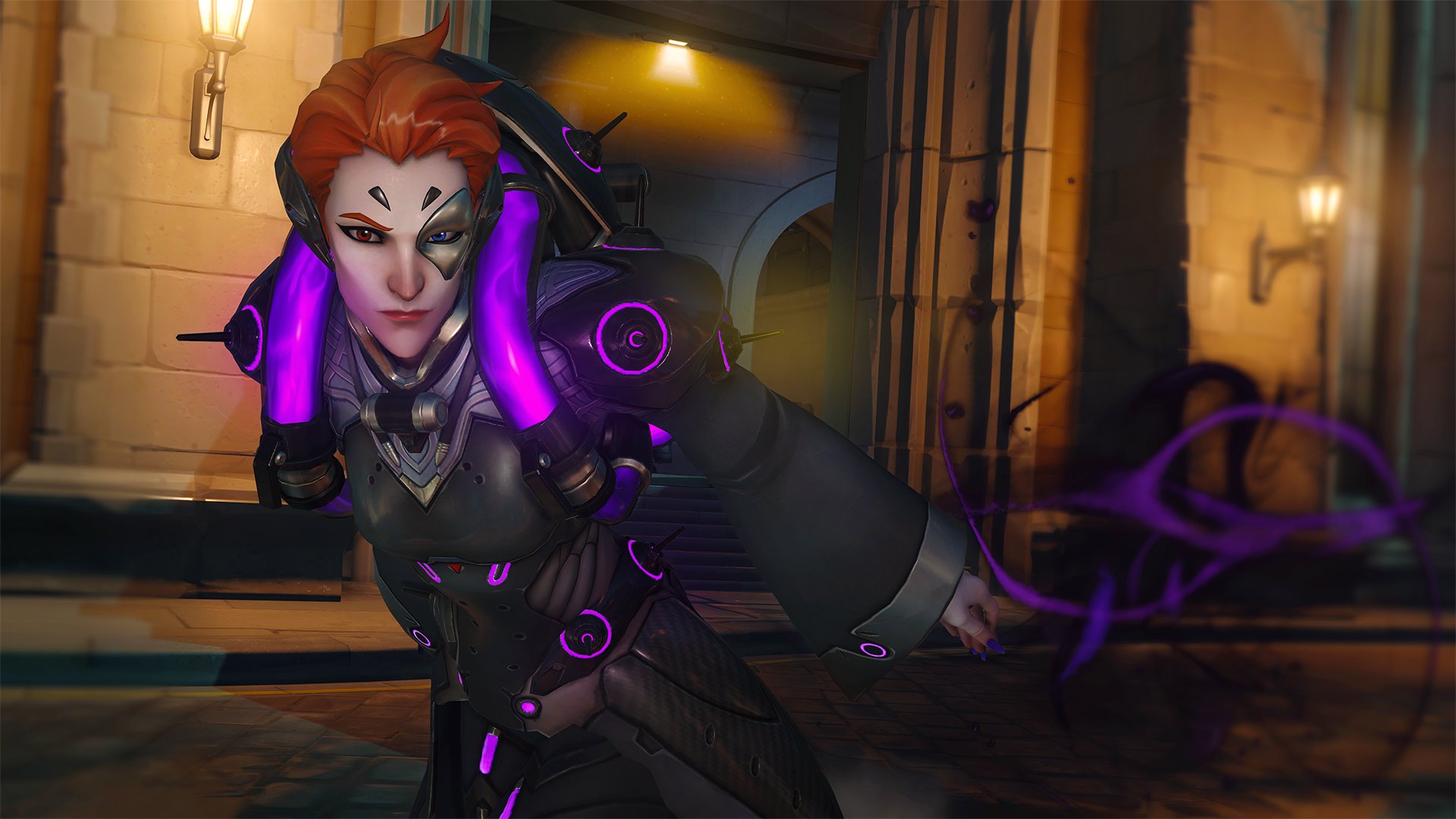 Fade is Moira’s escape move, and it’s a good one. She disappears briefly and appears a short distance away, very similar to Tracer’s blinks. It’s an entirely horizontal ability, so she can’t use it like Reaper’s Shadow Step or Genji’s Swift Strike to gain altitude. However, when she triggers it she can fully control her movement, and only the player controlling her will see which direction she’s headed. It’s a great way to juke an opposing flanker, and it has other utility as well.

While she’s faded Moira is completely untargetable, and she essentially leaves the map for a moment. When timed right this is a get-out-of-jail free card, and can be used to avoid enemy ultimates or any other source of burst damage. Fading can also clear effects like Mei’s partial freezing, Ana’s anti-healing grenade, and Zenyatta’s discord orb. She can use it to escape Zarya’s Graviton Surge, but for some reason she still gets stuck in Junkrat’s traps. It recharges every six seconds, so you’ll most likely have it available whenever you need it. 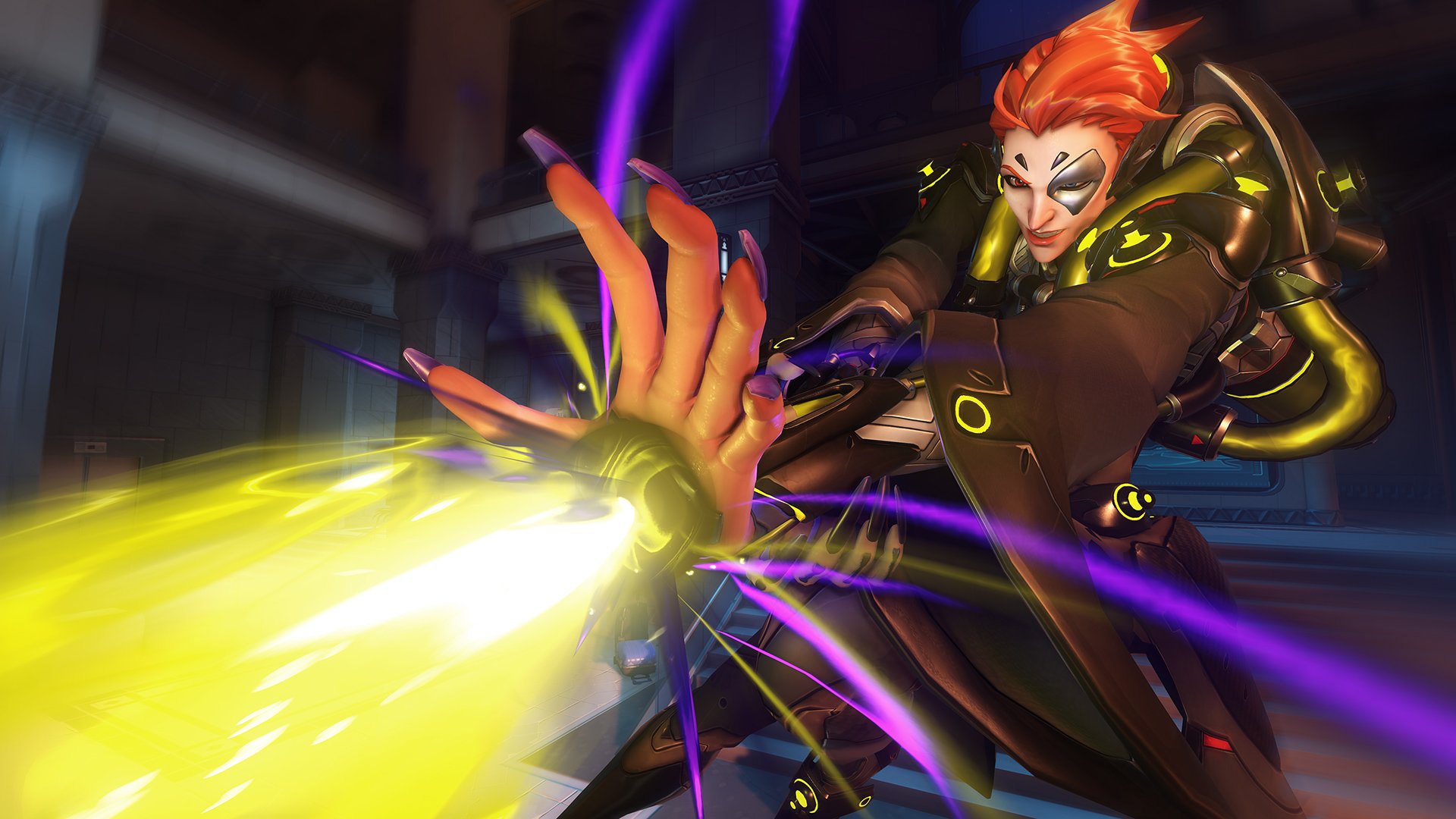 Moira’s ultimate, Coalescence, combines healing and harming into a single long-range beam she can channel for about ten seconds. The damage is comparable to a fully charged Zarya cannon: nothing you’d want to stand in, but not the instant kill hyper beam we were shown in the trailer. Similarly, Coalescence isn’t as powerful a healing ability as Zenyatta’s Transcendence, and it’s possible to force damage through. The beam goes right through enemy barriers, so between this and her orbs Moira should do well against teams with Reinhardt or Orisa as their main tank.

Moira will have to be careful if she’s playing against an enemy Roadhog, McCree or Sombra, since Coalescence can be interrupted by being hooked, stunned, or hacked. Throwing a healing orb before triggering Coalescence will help keep you alive while it’s active, a good idea because you paint a giant neon target on yourself when you begin firing your laser.

Surprisingly, Coalescence doesn’t heal Moira for any more than her damaging Biotic Grasp, though the effect can hit multiple enemies at the same time. It also doesn’t refill her healing meter more than Biotic Grasp unless you attack more than one foe with it. It’s by no means an instant win button, and finding a good angle or combining it with abilities that help you connect with a group of opponents at once will be key to getting the most out of Coalescence. 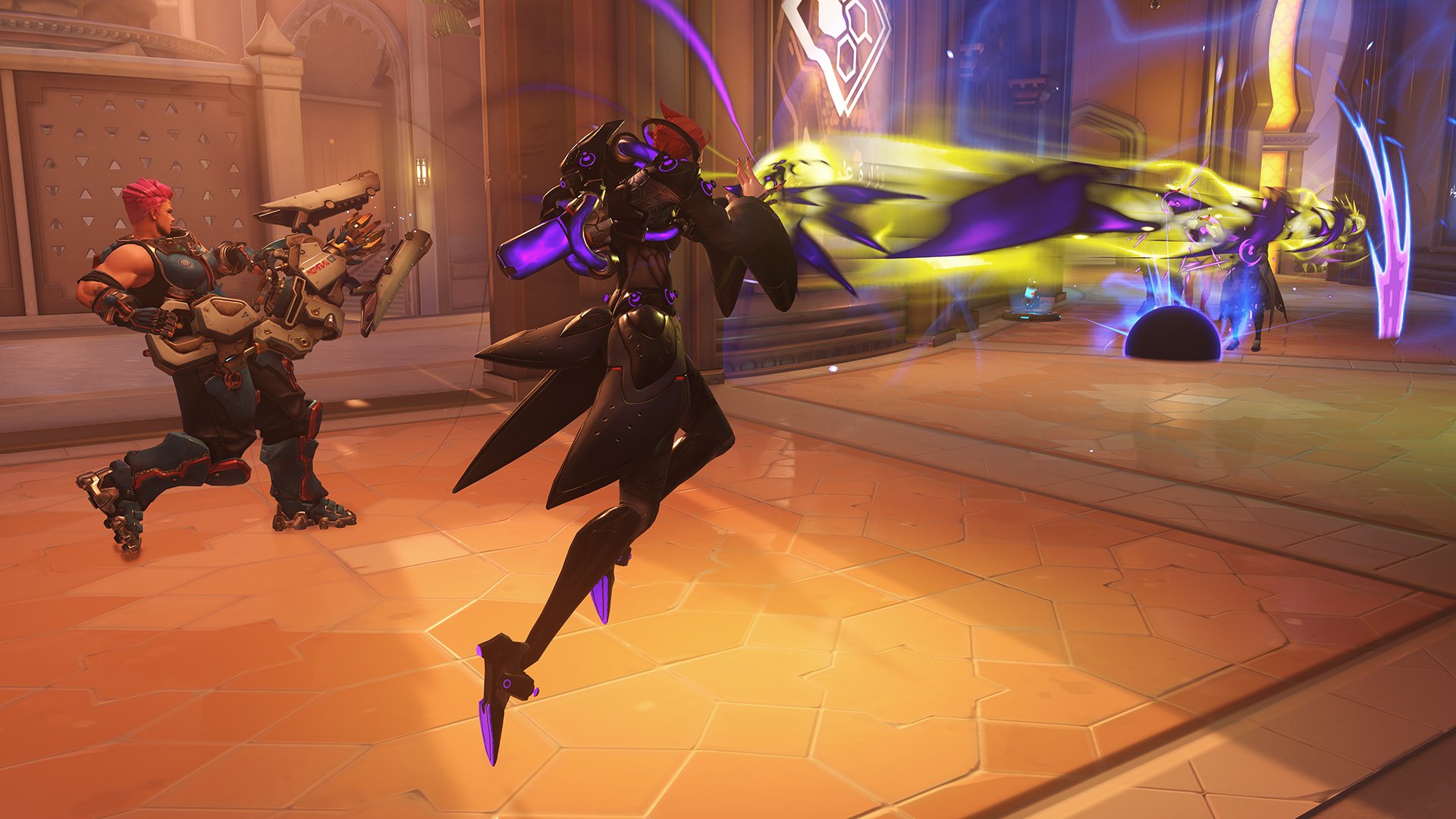 Blizzard did a fantastic job with Moira’s sound design: fully draining your heal meter sounds like using a straw to suck the last sips out of a soda can, and eliminating a player with Biotic Grasp makes a noise like the soul is being torn from their body. The voice work is great, too. Her Irish accent isn’t overbearing; there’s a slight lilt to her “R’s,” but it’s subtle and you have to listen for it. At no point did I think she was about to demand a bowlful of Looky Sharms.

Moira’s already a lot of fun to play, and her kit encourages an aggressiveness you don’t normally see from supports in Overwatch. Since she can’t heal forever the way Mercy can, she has to mix it up a lot more to keep her healing ability available. She’ll have some difficulty against longer range characters like Pharah and Widowmaker since they’ll be able to easily avoid her abilities. She’s also much harder to use effectively on maps without enclosed spaces, as it’s more difficult to bounce her orbs around and keep other players in range.

As much fun as she is, I don’t think Moira will see the same pick rate as other healers when she’s added to the live game. Even with the coming cast time nerf to Mercy’s Resurrect, the angel offers a ton of value that’s tough to compete with. Moira’s abilities are still being tweaked daily on the PTR, but I’d expect she’ll be added to the live game on all three platforms very soon.