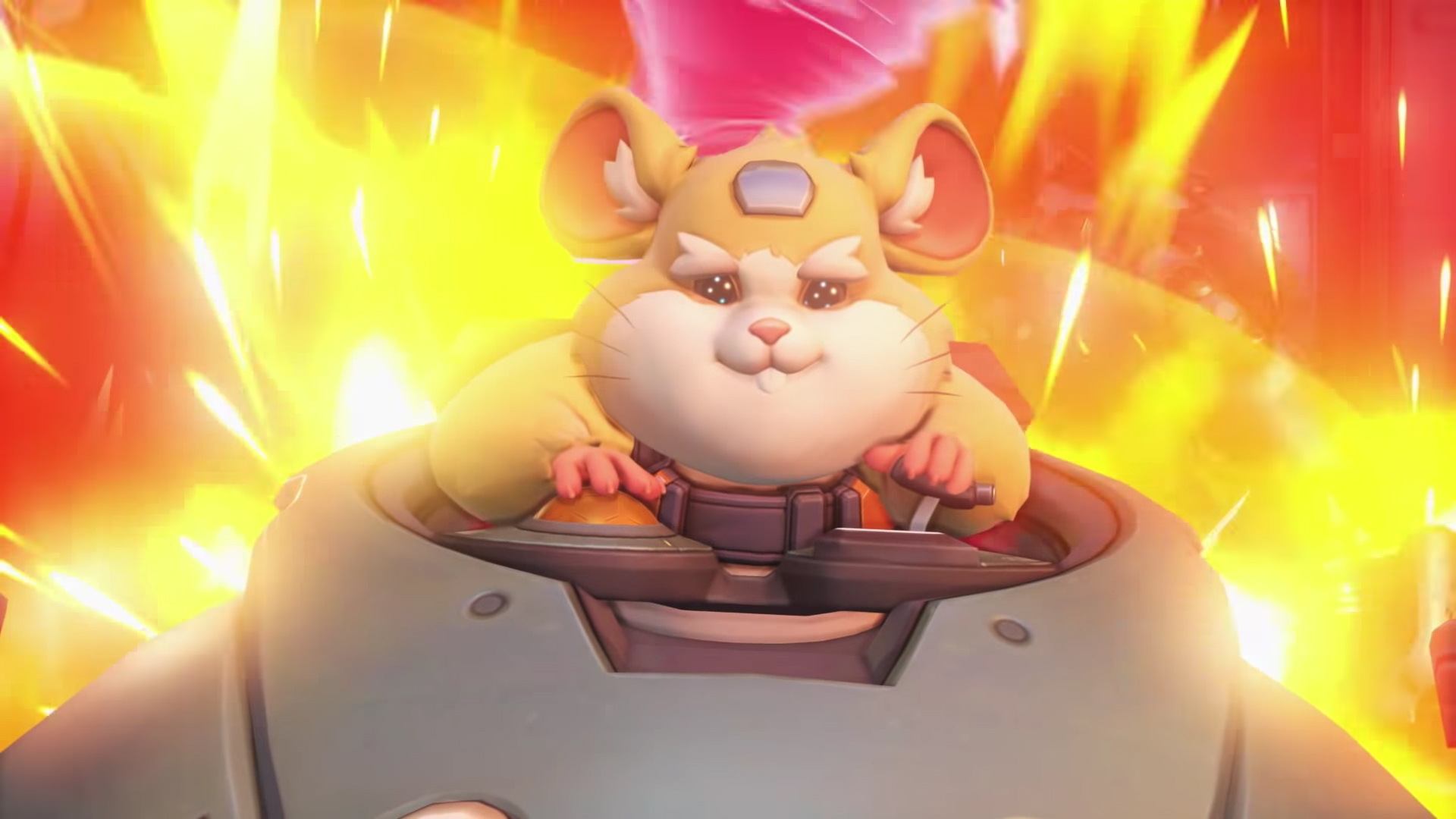 This new mobile tank hero can roll around, piledrive, lay mines, and use a grappling claw to swing himself up high to, say, focus down a pesky Widowmaker. I’m very much looking forward to that.

As a Zenyatta player, I felt physical pain watching my boy get smashed in this video.

Reminder: Overwatch is holding a free weekend starting Thursday, July 26. And if you missed it, here’s a big gallery of Wrecking Ball’s current skins. I’ve got 1,000 credits all ready to go.

Our smallest hero has become one of our team’s biggest achievements. When we first introduced Wrecking Ball to the team, making the hamster hero fit in the Overwatch lineup presented an exciting challenge.

Exploration is the key to animation, so we tried many different personality iterations for the hamster. At first, we made him maniacal, but he felt too evil, so we tried instead to highlight the difference between Hammond the critter—cute, cuddly, mischievous—and the Wrecking Ball mech—powerful, imposing, cold, and impersonal. Our eureka moment was nailing his “Relaxed” emote; I feel like it captures Hammond’s character and personality perfectly. He exudes confidence with the way he shifts his weight in the seat to get comfortable, then throws a cheese puff into the air and catches it in his mouth. After seeing it, we knew we has something special.

Wrecking Ball is one of our most agile tank heroes so far and has unique mechanics that I haven’t seen in other games. It was so exciting to see how much people loved him when we finally announced him. Be sure to roll into a match as Wrecking Ball and, while you’re at it, check out how he uses his trackball to pilot the mech!

Wrecking Ball’s tinkering capabilities and iron-clad mech make him a formidable tank hero, capable of bowling through the front line of the opposition and causing mayhem in the back line. His primary weapon, Quad Cannons, are two sets of twin machine guns that shred enemies caught in their crosshairs. No team is too much for Wrecking Ball to engage against with his Adaptive Shield, which generates more health based on the number of enemies nearby. This shield makes him incredibly difficult to kill when he bulldozes into the fray and, once he starts to get low on health, also provides him the endurance to escape. The Roll ability allows Wrecking Ball to withdraw the mech’s robotic limbs, transforming it into a ball with increased movement speed. No obstacle can stand in Wrecking Ball’s way when he uses Grappling Claw, a short-range ability that grips the environment, letting him swing across terrain gaps or around corners to smash enemies. Grappling Claw also allows Wrecking Ball to reach top speed and ram into foes, dealing destructive damage and knocking them back. While airborne, the mech’s Piledriver ability causes Wrecking Ball to slam down from the air and knock his enemies off their feet.

When Wrecking Ball is at his strongest, he can use Minefield which flings mines onto the ground that deal a considerable amount of damage to enemies unfortunate enough to trigger them.

As with all new heroes, please note that Wrecking Ball’s release in Competitive Play will be delayed by two weeks.

Developer Comments: The goal of these changes is to slightly reduce the impact of damage falloff on mid-range weapons. While assessing falloff mechanics across the board, weapons intended primarily for close-range combat benefited too greatly from lowering their falloff restrictions. We also normalized a couple of outliers in that Mei had a long-range travel time projectile with falloff applied and Widowmaker’s automatic fire did not have any.

Developer Comments: Hanzo’s new kit has proven to be a bit too powerful, especially his new Storm Arrows ability. We’re lowering the frequency that he can have this ability available to make it more reasonable to play around.

Developer Comments: These changes allow Sombra to more easily play as an infiltrator and scout for her team, as well as give her time to pick and choose when to reveal herself to ambush her enemies.

Developer Comments: In a previous patch we added a system to adjust the respawn rate of defenders in situations where attackers have a prolonged advantage in fights on final objectives. We’re just making this system a bit more aggressive to further reduce the duration of the long, drawn out fights that can occur when the defender spawns are so close to the action.

Developer Comments: We have reduced the overall game time for Assault maps in Quickplay and Arcade Modes. Players now have four minutes to capture each point instead of the current five minutes per point. In some games, Point A would be captured rather quickly resulting in what could be lengthy battle over Point B. Point B is typically more defendable than Point A and, in some games, defenders were able to hold for the entire duration of remaining time which could potentially be 8 minutes or more. We felt that in these instances the overall time was simply too long for either team, with attackers unable to take the point and defenders having to hold. The reduction in time is now consistent with the Competitive Play times which provides an ample amount of time for both attackers and defenders, but hopefully removes the occasional game where it feels like you are playing against the timer and not the other team.

Today’s update also has numerous bug fixes, which you can find listed here.