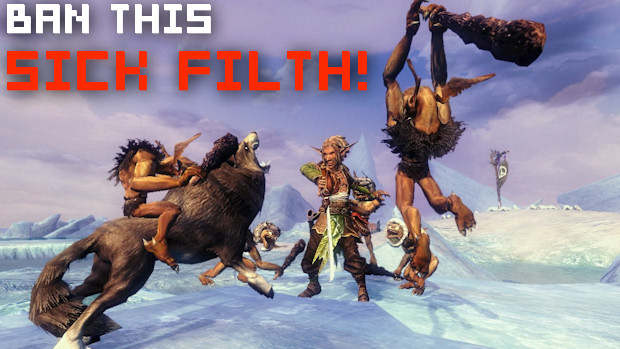 The latest issue of Game Informer has a feature called “Beyond Polygons,” which collects a number of stories from within the studios working on a few big-name titles. Among them as Triumph Studios, and since I’m a big fan of Overlord II, I homed in on the fun facts about the evil sequel’s development.

According to Triumph, Overlord II is attempting to offend as many different groups and ideologies as possible, “so nobody has to feel discriminated against.” We’ve already gotten to see seal clubbing in the game, and allegedly a few key members of the studio went to the arctic and got to club real-life seals. I do hope that bit was a joke, but if not, the game has already succeeded in its goal of offending people.

Another interesting bit of gossip is the fact that Florian Greenhart, the douchey elf hero who you encounter in the Overlord II demo, is based on the notorious “Leave Britney Alone” Youtube video. Triumph also threw in caricatures of environmental protesters too, just to make sure they keep pissing people off.

It sounds like Overlord II is being made by a bunch of arseholes. If that is the case, then I have every belief that the game will be incredibly successful in its goal of making you feel like a supremely evil tyrant.