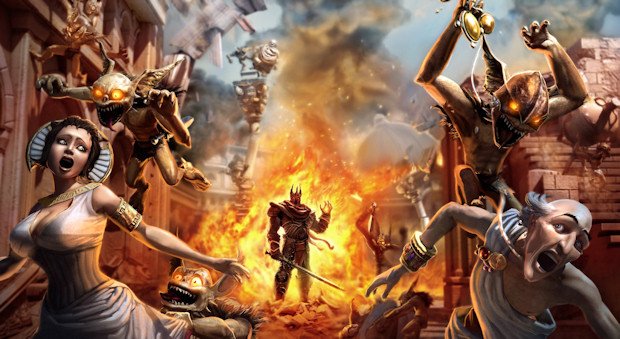 If you loved Overlord II, then let it be known that Codemasters has released the first downloadable content on Xbox Live and PlayStation Network, available for your downloading pleasure on both systems today. “Battle Rock Nemesis” is a new netherworld arena, containing a number of combat challenges. It’s not like Fraggle Rock.

Battle Rock Nemesis is available for $5.00/£3.99/€3.99 on the PSN, and costs 400 MS Points on Xbox Live. Nothing’s been announced for PC yet, but Codemasters will be releasing DLC for home computers at some point. The XBL version also has new Achievements worth an extra 100 Gamerpoints.

Sounds good, and not a bad price, really. You tempted to pick it up, or have you had enough Overlording?

The ‘Battle Rock Nemesis’ downloadable content installs the imposing ‘Battle Rock’ arena in the Netherworld which plays host to a series of new combat challenges as the player progresses through the game. Gamers harvest life force as they wreak havoc upon Nordburg Hunters and Gnomes in practice rounds and then take on fearsome foes, including the Satyr, the Empire’s Champion, and the fabled Phoenix in a series of boss battles which unlock new rewards including more powerful spells and in-game items for the Overlord and his Minions. On Xbox 360, players can earn Achievements worth 100 points through winning the boss battles.

Overlord II is the sequel to the original twisted fantasy action adventure and is available for the PLAYSTATION3 computer entertainment system, Xbox 360 video game and entertainment system from Microsoft and PC, with full online & offline multiplayer and split screen functions. Overlord® Dark Legend™ was developed and designed exclusively for Wii™ and features Minion control through intuitive Wii Remote movement. Overlord® Minions™ is a dedicated puzzle action title, developed exclusively for Nintendo DS™ and uses 100% touch screen controls, perfect for Overlords on the go.