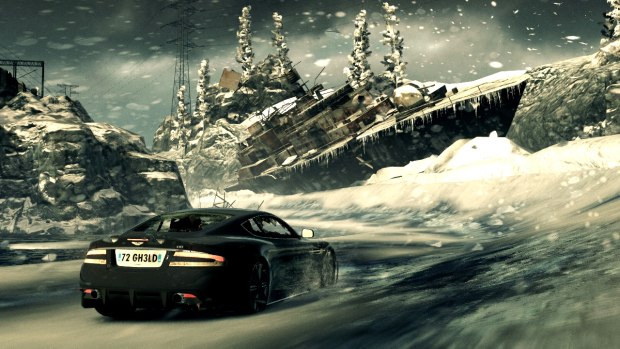 Get ready for some Bond minutia. I doubt most of you will care.

Above you’ll find the opening credits to the upcoming Bond game Blood Stone with Bond girl and singer Joss Stone performing the opening song. As you most likely know these are kind of a big deal, and even biggers since opening credits are a dying breed as more and more films opt to tack them at the end of the film and the art direction falls into a bottomless pit of no return.

Thankfully, the tradition carries on with Bond, and while few of the modern opening sequences for the films or games have lived up to Maurice Binder’s iconic openings (he made everyone through Dalton except for Goldfinger and From Russia With Love), there have still been some notable entries like GoldenEye‘s return to form with naked women hacking away at symbols of the Soviet Union and Casino Royale‘s impressive re-imagining of what a Bond opening sequence could be.

As for the one above, it’s a nice copy of what the new sequences are with plenty of Binder’s naked women thrown in, but it seriously lacks much originality. Obviously car racing is going to be a big part in this game, but having the cars so blatantly featured in the opening just doesn’t jive well (though the tire shot is pretty cool), and the exploding diamonds is right out of Casino Royale‘s exploding card suits. It works, but I won’t be writing home any letters about it.

As for the song, it’s pretty solid, with a definite lean towards a Bond ballad instead of the more rock-based numbers we’ve gotten for the previous two films. I’m a decent enough fan of Ms. Stone, and she belts it out pretty well here. I’d have to hear the entire thing to pass full judgment.

The fact that there is an original opening credits sequence at all and that they at least have aped a successful one gives me even more hope that we’ll be getting a very solid entry into the world of Bond.