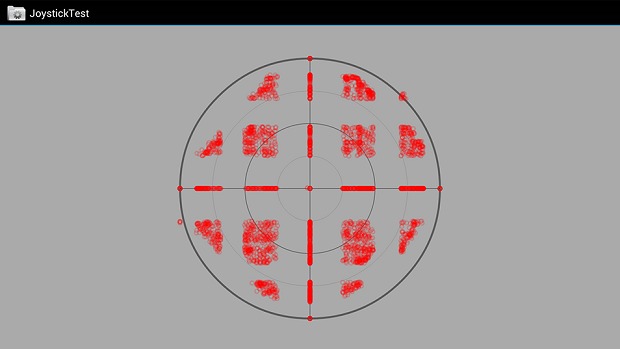 But it looks like a software fix is possible

With just a few weeks before its official launch, the future of the OUYA is still quite uncertain. The Android-based console that has been trickling out to Kickstarter backers has been met with middling reception, with common complaints abound regarding button sticking and input lag. Adding to the control issues, an OUYA developer posted late last week about an issue with the system’s analog sticks.

Eric Froemling, developer of BombSquad, noticed that movement along a diagonal in his game was much slower than movement along one of the cardinal directions, so he built a simple piece of software to test the range of input of an analog stick, and he compared the results from the OUYA controller to those from an Xbox 360 controller and a PlayStation 3 controller. The output from the OUYA controller is shown above, and the discrepancy between it and its competition is staggering.

Where the Xbox 360 controller shows a full range of coordinates in a roughly circular shape and the PlayStation 3 controller does the same but in a square, the OUYA controller shows hotspots of activity between a thick grid of dead zones. One thing to note from the OUYA’s output is that the greatest magnitude is generally only achieved along the cardinal directions, and between those it is limited, causing the slow diagonal movement that Froemling is experiencing with BombSquad.

On the bright side, Froemling later posted a software fix that appears to address the worst of the problem, though some preference is still given to the cardinal directions, with a slightly higher point density along the axes. It seems that a software fix is plausible for this issue, but it seems a bit duplicitous that it has fallen on the game developers to create these fixes rather than the OUYA team itself.