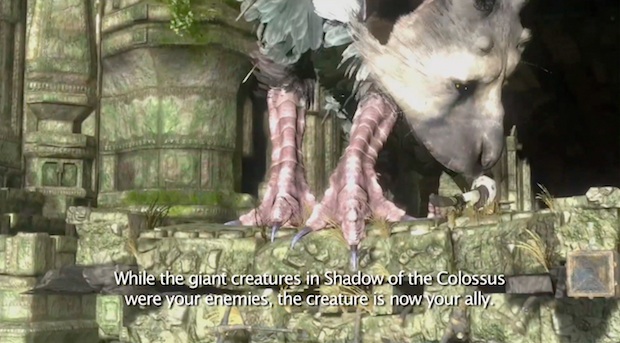 The Ico & Shadow of the Colossus Collection is packed with bonus video content that is sure to thrill fans of either or both games. After seeing it all I’d say that the video content alone is worth the price of entry! You’ll have to get your own copy of the collection to see it all, but I am able to share a clip of some choice sections with you.

I really enjoyed the double feature on both Ico and Shadow of the Colossus. The creators go all out, laying out the juicy details of the development stage of both games. You’re treated to the best tidbits of information, all laced with updated HD footage from both titles. Our clip gives a bit the team talking about the work it took to update these games to be HD PS3 titles. The examples will give you a good feel for all of the work that went into updating these classics.

In the included roundtable discussion fans get really neat details on all Team Ico titles. In this I learned how all the original creators went to the same college, or how they Ueda didn’t want to make a “game-y” game with Ico, and that’s why they brought in people that weren’t necessarily game makers. There’s a lot of talk about their fears of Ico not working as a game, which was surprising. I love that the US Ico box art came up. Not everyone loved it, as you’ll see in the above clip.

As a fan, the included early concept footage clips were thrill to see. For Shadow, I was surprised to see some of the early forms for the colossi — they’ve come a long way since this early start. Ico early footage is also on the disc, giving us a taste of Ueda’s earliest ideas. For our clip you’ll get a rare look at Nico, a game that was never made. Imagine Shadow of the Colossus, but as an online title, and you’ll have some idea of what they were thinking.

Finally, there’s a bit of talk about Team Ico’s next game, The Last Guardian. In the clip you’ll learn how the Guardian’s strange mix of household pets came together. I was moved after watching the entire segment. You’ll definitely want to see the rest of this.

The Ico & Shadow of the Colossus Collection goes on sale tomorrow!