[Old-school Dtoid community blogger craineum shares his last seven Halloween adventures with us. What an awesome dad! Want to see your own stuff appear on the front page? Go write something! –Mr Andy Dixon]

I haven’t written an article here in a long time. Life got busy, we moved, had new adventures and new jobs. During my life I have changed hobbies more than I care to admit. The one hobby that I have kept for the last seven Halloweens is our costume creations.

I will review all our costumes before revealing our latest. I will also include links to Instructables.com if you are interested in how to build these, or want more details. 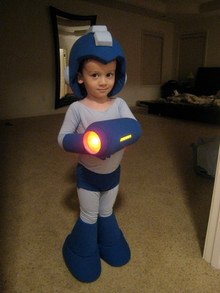 This hobby got started when my boys were 3 and 1 years old. I wanted to do a set of themed costumes for us. I couldn’t think of anything good and my boys were a little young to pick out something on their own. I decided to have a contest on Destructoid to help me decide. That is where the idea for Captain N the Game Master, that horribly awesome cartoon, came from. It was a great idea as I could be Captain N, and my oldest could be Mega Man, and youngest Kid Icarus. This incorporated size differences, and covered some of my favorite games from my childhood.

This created the spark that my old artists mind needed. From there I jammed through the design and construction. I was really happy with how it came out and got me hooked. The best part was enjoying watching my boys have fun in the suits. It also didn’t hurt that I got a great response from the designs online. 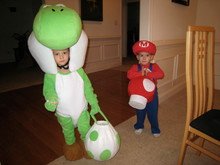 The second year saw my ambition grow along with my sons. We decided to do a Mario themed set with Yoshi and Mario. I wanted to make Yoshi semi proportional, so his head was very large. My son was a trouper and enjoyed the costume even if he took the head off every now and then. My youngest was happy running around as a little plumber. So cute! 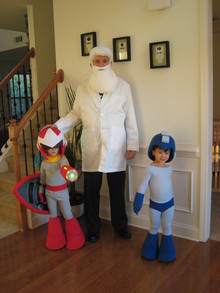 My youngest was now old enough to ask for what he wanted. He had seen pictures of our 2008 outing and really wanted to be Mega Man. We also decided to have his big brother join us as Mega Man’s big brother Proto Man. I rounded out the theme with me dressing as Dr. Light. The Proto Man build was the costume I had the most fun making. It was the year that I started having my boys (mostly my oldest at this time) start helping in earnest.

This was also the last costume that I posted here. After that we moved to New Hampshire and life really changed, but this hobby stuck with us. 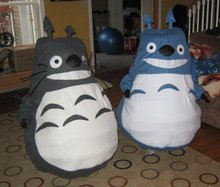 We were living in a new state and enjoying new things like Studio Ghibli movies. So we changed from video game related costumes to movies. Both boys wanted to be Totoro, and I thought “great! only one design to make.” After doing the proportions I came up with a full body costume made out of hula hoops. Mobility was definitely limited, but again my boys were troopers and had fun! 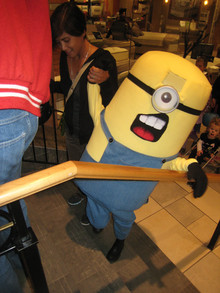 As my boys got older they diverged on what they wanted to be. This was the first year we didn’t do a family theme, but we enjoyed each one individually. My oldest wanted to be a Minion from Despicable Me and my youngest Batman. I cheated on Batman and bought a costume as I didn’t have time to do two different designs with a new job. This was also when I found the glorious Walmart blue camping pad material. It was perfect to make the minion costume light and fairly maneuverable. This is my favorite costume to watch my boys wear. They also get the most attention in this costume then any other. 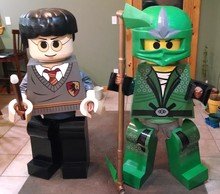 LEGO!!! that is all my boys like to play with, and as such wanted to do Lego based costumes. This was a dark dark year for costumes. I think these are the most realistic recreations that I have done. But as such were completely impractical. The boys could hardly move around and ended up just wearing the body’s for trick-or-treating. We also go to a parade every year, and this year I modified a cart so they could just stand and wave. We had fun, but given enough time, which I didn’t have, I would have remade them differently. 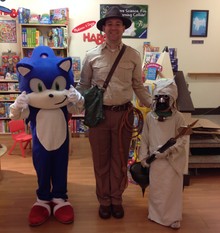 That brings us to this year. My boys are now 9 and 7, and helping more and more. They are also fully engaged in what they want to be. I learned a huge lesson from last years debacle and was going to correct it. My oldest wanted to be a Tusken Raider from Star Wars. This was a relief as I could make a small helmet for him, that we worked on together.

My youngest wanted to be Sonic the Hedgehog. I was determined to make it wearable. I tried to talk him into having a hoodie or a simple mask, but he was having none of that. I can’t blame him, as I am the one that has always taught him to make it look like the real thing. So based on that I went for the lightest, best looking head we could do. We succeeded. This year I am very very happy with the results.

If you have the time and could support me I would love some votes over at this year’s instructables for Sonic and the Tusken Raider.

Hopefully I will be back next year to share again.