God of War goes multiplayer. It seems like a simple idea at first, but that’s a pretty big goal if you really think about it. Taking the series’ gameplay and cinematic style and making that work online with multiple players couldn’t have been easy. And from the looks of it, Sony Santa Monica isn’t planning on taking the easy way out with Ascension. They’re already calling it the most ambitious God of War game they’ve ever made.

Ascension is a prequel to the God of War trilogy, and it will focus on a single-player campaign, but Sony Santa Monica managed to steer clear of any details at the debut press event last week, instead focusing on the multiplayer side of the game. Well, after a bit of confusion, that is. 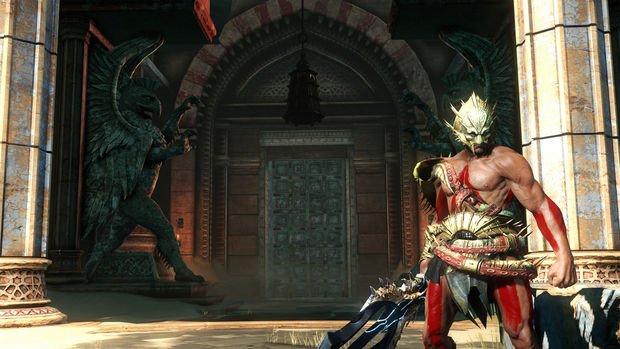 It started out with a Kratos look-alike putting a helmet on his head, preparing for battle. A huge one-eyed ogre crashes through a door near him, and the fighter takes it on in action not unlike those of the previous three games. But suddenly, out of nowhere, a second player jumps in, and a cooperative fight against the ogre begins. Both fighters slash at its legs to wear it down. Later they work their way up to its head, with one pulling back on its neck with dual blades as the other jams a sword into its throat, finishing it off.

The duo enters the door and works their way through a corridor to an expansive play field, where it seems that several smaller battles are taking place. But, instead of the expected NPCs on beasts fights, a camera flyover of the stage seems to show characters not unlike the the two fighters dueling each other. They all look a bit like Kratos, but where his red skin patches would be might be colored yellow or blue, and the weapons were all a bit different. 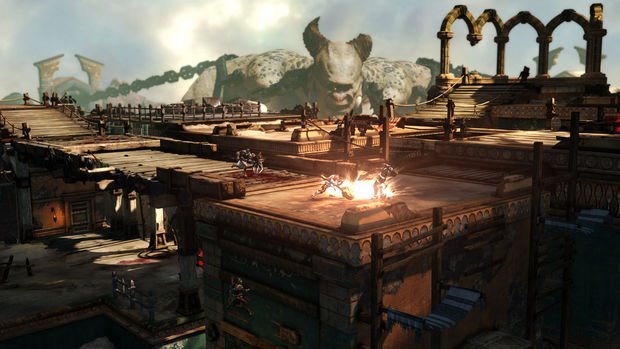 The Kratos look-alike and his buddy make their way through the crowd of dozens of other fighters, taking many of them on in one-on-one battles as a huge, building-sized cyclops thrashes in the background. The duo clears the field of other combatants after some time and makes their way to the cyclops’ head, where they team up with two or three other fighters to drag it down and finally jab it in they eye to kill it.

The gameplay started out looking like standard single-player, but then switched to look like two-player co-op for a bit. After that, it looked to be some kind of online arena fight, but the co-op theme continued through it. And then the end comes, which seemed to mix the trademark cinematic boss battles of the trilogy with what looked to be team play. What were they trying to reveal to us? 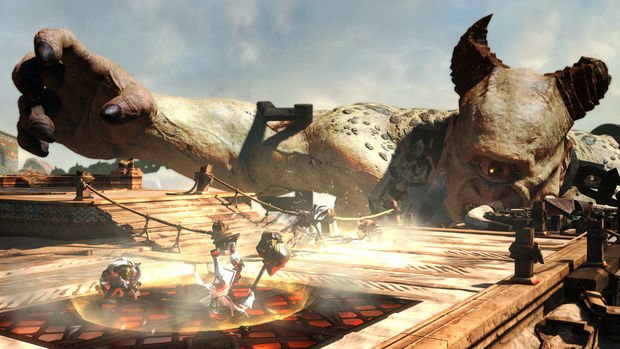 After the demo we found out that the single-player and co-op sections were crafted to trick the attending press. Mission accomplished. The real point of the presentation was to show off the multiplayer side of Ascension. Game Director Todd Pappy walked us through what we saw, and gave some hints as to what to expect in God of War‘s first multiplayer outing.

It turns out that we were watching live 4 vs. 4 multplayer in this demo. The arena fight we saw was called Execution. It’s a domination mode where teams fight against each other to control points, with the tide swinging back and forth between the red (say, Troy) and blue (Sparta).

All of those colored Kratos wannabes were “champions of the gods.” God of War: Ascension’s multiplayer takes players from unknown heroes to full-on gods with Kratos-like weapons and powers. Starting out, players will chose to follow in the steps of their chosen god, selling their souls to Zeus, Poseidon, Ares, and others to gain special abilities, weapons, and armor. Players will be able to customize and eventually upgrade their warriors to their liking. Kratos himself will not appear in multiplayer, though. 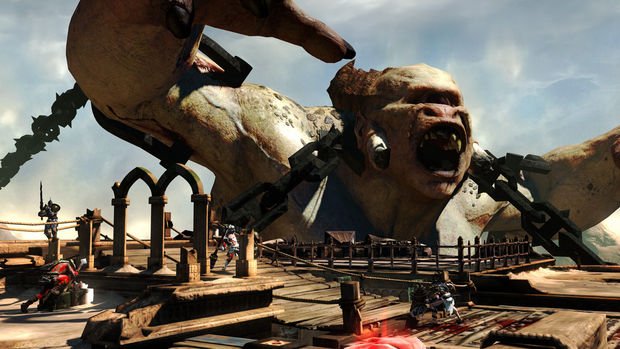 Pappy says that they’re working to make the combat as brutal and flashy as you’d expect from a God of War title, but that they’ve had a tough time taking single-player fighting into multiplayer and keeping it balanced. They want to make sure that it still feels like a God of War game, complete with all the gore kills and cinematic takedowns that we all love, but they still have a bit of a ways to go before they get there.

Other details on multiplayer were hard to come by, as Pappy admits that they’re still figuring it out. We know that they’re looking at having five larger maps, and two supplementary smaller ones for multiplayer. We can expect the big, cinematic moments we’ve come to know from the team in multiplayer, but they won’t necessarily figure into the overall story. They’re still working on multiplayer game types, with Pappy saying that if they can infuse God of War into the standard types, they’ll use them. For now, it sounds like death match, domination and some variant of CTF are planned, and they’re working on training sessions to teach players the intricacies of battle for these modes. Finally, the team is set on online multiplayer, so those hoping for split-screen action are out of luck.

For those worried about the single-player campaign after all of this multiplayer talk, don’t. Pappy assured the attending press that the story mode is the bread and butter of the franchise, and that we’ll hear more on that later. For now, the team wanted to try something new, so they’re focusing on that first.

An ancient world populated with dozens of online Kratos-like god warriors certainly sounds interesting, but we’ll have to see more to get a better understanding of what Sony Santa Monica has planned. As it stands now, it’s nice to know that they’re trying new things with the franchise. God of War fans should look forward to more news as move toward E3 next month.