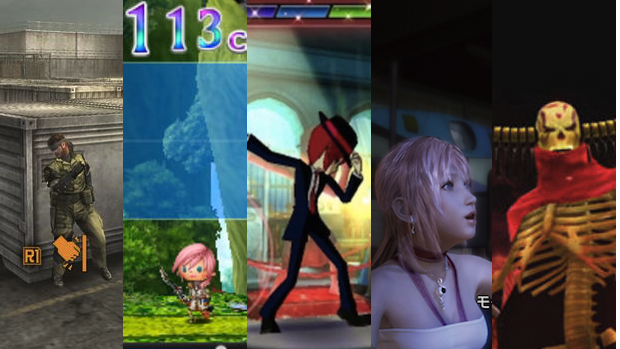 It’s almost over. What a long week! This year’s Tokyo Game Show was a huge show, with record attendance, a hot new portable and tons of new games. I’ll look back at TGS 2011 and always remember three things:

As Destructoid’s TGS team wraps up our show coverage today, we look back at the past week’s coverage to pick our favorite games of the show. Hamza, Allistair and I played a lot of new titles this week, but the games that follow are the ones that we’ll be looking forward to spending more time with.

I’m sure I would have been excited for all the Vita stuff, but I only ended up seeing two Vita games the whole trip. One was Sound Shapes but I couldn’t even even play it properly because I couldn’t hear the audio on the Sony boat trip. The other was Army Corps of Hell, which was pretty cool but not something I see myself picking up at release. It was just too ridiclous to play anything more with  the crazy lines for all the Vita games.

Sine Mora: I always imagined Tokyo Game Show being some sort of Mecca for Japanese RPGs and shoot-em-ups. In my TGS dreams, Cave are there to greet me with a line-up of new cabinets that I will play and obsess over for years to come. As it turns out, Cave isn’t even at the show and the only shmup present is made by a European developer. Sine Mora is a great one, though, and makes up for Cave’s absence. With the right influences and Grasshopper Manufacture’s stellar visual and audio design, Digital Reality’s upcoming PSN/XBLA shmup is shaping up to be the shmup to end all shmups. Well, hopefully not but I don’t think a developer has ever attempted to reach a mainstream audience within the genre while paying close attention the genre’s most dedicated fans. For these two groups and everyone that falls between, Sine Mora is something to get excited about.

Rhythm Thief: The first thing we did upon arriving at TGS was walk the show floor in search of new games and unknowns. Rhythm Thief stood out thanks to monitors showing off its quirky rhythm games and the large cutouts displaying the game’s lovable character design. It’s an easy game to like, assuming you have any affinity for Professor Layton and Rhythm Heaven. Even if the game’s rhythm games end up being shallow and repetitive – which the demo indicated will not be the case – there is still a large world and mystery plot to explore, which makes this a heavily anticipated 3DS game for me. The only problem is that I don’t have one yet.

Theatrhythm: Final Fantasy: It seems strange that my three most anticipated TGS games are all portable or downloadable games, as opposed to boxed-retail epics. I can’t deny my love of Final Fantasy and the great soundtracks that have complimented series entries over the years. Although I only got to demo the game very briefly, I fell absolutely in love with its touch interface that somehow improves on the Elite Beat Agents format. The way you “play” a song links to the music in way I didn’t expect. I’m not sure how all the game ties together or how you level-up, but I’m sure I will have a hard time prying myself away from this one. As laughable as the concept might have sounded coming into TGS, shit just got real.

Theatrhythm: Final Fantasy: Here’s how it went: I had an appointment with Square Enix to play several of their games. I ran into the room where the appointment was, rudely bypassing everyone and everything, cutting in front of another press member to move directly to where a 3DS sat. I knew what was on it: Theatrhythm. I pushed a button and giggled out loud. Then I played and played. Laughed and played. I played all the songs available, some of them two or three times. I love this game. I kept saying it aloud, telling anyone who would listen. It’s Final Fantasy fan service mixed with the series’ best songs to make a great little rhythm game. Hey, I love this game. I love this game.

Final Fantasy XIII-2: Not to be a total Square Enix fanboy at TGS, but I’m really jazzed about Final Fantasy XIII-2. I’ve played a lot of this game. A whole lot — so much so that you wouldn’t believe me if I told you how much of this game I’ve seen. I can’t give full details yet, but I can say that this is one of those sequels that fixes things that its predecessor suffered from. It’s easier to get into, easier to enjoy, it’s more focused, it’s more lighthearted, and the story seems solid. There’s nothing linear about this game, and you don’t’ have to wait for 20 hours to begin exploring on your own. This is definitely one of those cases where the sequel is better than the first.