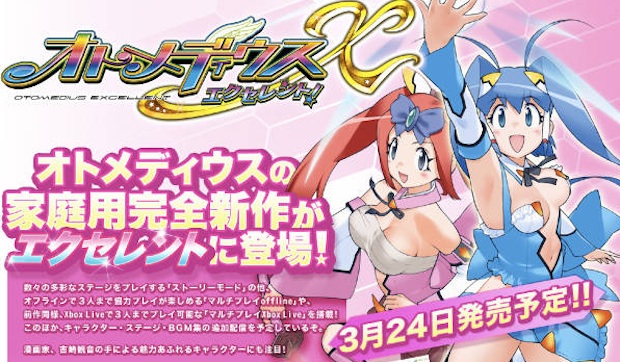 Konami’s Xbox 360 shooter, Otomedius X (Excellent), was already a big deal. It finally got a release date of March 24 recently, but perhaps even more exciting than the final release date is the composer line-up for the soundtrack. Instead of just a one or two people on the soundtrack, 28 people from all over the world are coming together to make the music.

OSV has the exclusive list of composers, which you’ll find below the jump. You’ll see that it reads like a list of game music’s biggest badasses. GEM Impact heads the project up. From Japan, many of my favorite composers are listed. Noriyuki Iwadare (Lunar, Grandia), Yuzo Koshiro (Streets of Rage, Shenmue) and Motoi Sakuraba (Star Ocean, Valkyria Profile, Tales series) are among the long list. From America I’m happy to see Jeremy Soule (Elder Scrolls series and much more) and even a friend, Jake Kaufman (Shantae, Contra 4).

What does this mean? This is going to be an amazing soundtrack. Oh, and 120 tracks? Are they trying to kill me with this? At this point, who cares about the game?