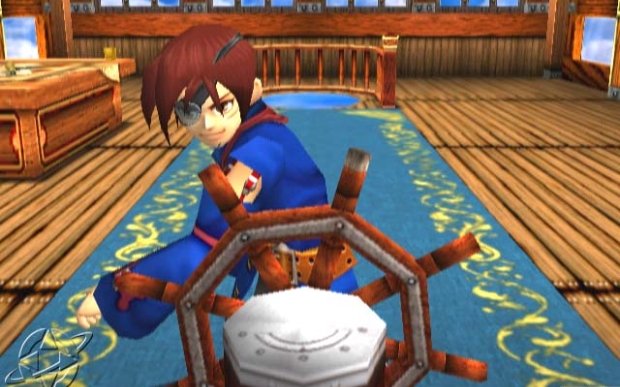 I have traveled beyond the sunset. I have lifted the veil and gazed into the shining blue yonder. The edge of the world is never just so; there is always more to experience, more to imbibe, and more to soak in.

The world of Arcadia fascinated me from the moment I took the helm. Air ships were the main mode of transportation between floating masses of land. Even the Blue Rogues’ headquarters was located in a secret dock within one of these miraculously hovering islands. Before I had even made it back to base I had already discovered a landmark that no one else in this world had seen! What other secrets lay hidden across the globe? For all I knew, the world was a flat place where dangerous creatures lay in wait at the edge, mouth agape. I immediately had a sense of excitement instilled in me.

Open air carries with it the scent of adventure. From the highest point on Pirate Isle, you can almost taste it.

My adventure started with the retrieval of a large chunk of moonstone, a substance so powerful that it fueled ships and granted magic strength. The lands of Arcadia each sit beneath one of its six moons. Pirate Isle and the lost land of Soltis were blessed by the Silver Moon, Valua by the Yellow Moon, Nasr sweltered under the Red Moon, Horteka flourished under the Green Moon, Yafutoma sat blissfully separated under the Blue Moon, and the icy northern wastes shivered under the faint light of the Purple Moon.

The magic system directly ties in to the world. Each moon signifies specific spell groups, and within these groups there is balance. Green can heal as well as poison; Silver can revive as well as kill. 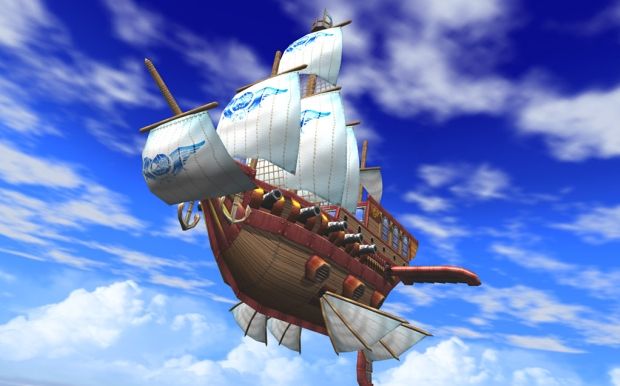 As a fan of swashbuckling, the aesthetic of fighting on the deck of a ship has always been appealing: my dastardly crew awaiting the enemy onslaught with swords (or flintlocks) in hand. Skies of Arcadia has this in spades. The reputation system in the game is a fantastic idea, allowing the player to give some control over their dialog but rewarding them for doing the right thing. I felt like it was me who made Vyse the fearsome little devil he had become. I had accomplished those tasks, discovered those lost continents, defeated those pirates or imperials, and I did it with style. Even more stylish than the random battles, were the ship to ship encounters. I often felt hunted when a Black Pirate ship appeared on the horizon, knowing they were out to plunder me or collect the bounty on my head.

The game was not satisfied with just having the standard ship against ship battles repeat themselves. I fought demons taller than mountains. I struggled for my life in deep air knowing the vanquished would be crushed under the pressure. I even took part in an all out war against a massive battle station.

The sheer variety of locales still amazes me. One moment I could be retrieving a note in a bottle at the lighthouse of Sailors’ Island (a friendly port filled with people resting between journeys), while the next I am escaping dark and dreary Valua by train. The sands of Maranba were too hot to be traversed without the aid of a Dhabu, and the forests of Horteka held many secrets. Yafutoma’s beautiful waterfalls were peaceful, even when plummeting over them, and Esperanza’s hopelessness was never complete while there was a chance that someone could traverse the void.

The most pleasure I ever got from the game was whenever it did the unexpected. I knew I might explore each of the six lands when I first heard about the moons, but I never expected to become shipwrecked, scrounging for food and firewood, alone on Crescent Isle. Or search for Daccat’s treasure with only half a map, leading me to a dungeon that required cooperation more than reckless treasure hunting. In the world of Arcadia, things change. I became famous, my own pirate base was constructed to my specifications on the site of a formerly abandoned island. Even the great cities that seemed too beautiful to ever change were destroyed in an instant.

What lies beyond the sunset? More horizon. I have walked the surface of the Silver Moon, flown high above the clouds, dived into the depths and darkness of deep air, and for each of these steps, the world has grown with me.

My only question is “Where is my next destination?”