It’s not easy to live in Liberty City. I suppose that I don’t even have to point that out. You are probably already aware of the actions of Niko Bellic and the other reckless criminals like him, but how many of you have stopped to consider what it is like to be a regular resident of the most dangerous city in the world?

Imagine walking down the street, groceries in hand, saying hello to an old friend on the street, and then seeing their eyes widen. You turn around, hearing the screeching tires, and see a Sentinel XS barreling towards you, careening off the road and onto the sidewalk. You jump out of the way instinctively, but your old friend is not so lucky, and he gets clipped as the car takes out a sign or two and swerves back on the road. This is my life. I live in Liberty City.

It wasn’t always so bad here. Liberty City used to be a place that was overflowing with culture, art, and possibilities. The city has always had a tough underbelly, but it was a place where good people could do good things. Now, you’re just as likely to catch a stray bullet as you are to get a quick meal at the Cluckin’ Bell down the road.

How did it get this way? Well, besides the criminals, the apathy, the scum like Bellic who have no regard for anyone else’s well-being, there are the cops. The police here are the most crooked in the entire world without a doubt. How else can you explain how a guy can go on a killing spree, taking out 19 innocent bystanders, participating in a shoot-out with gang bangers, and then leading the cops on a fifteen-minute chase only to be back on the streets within a few hours? 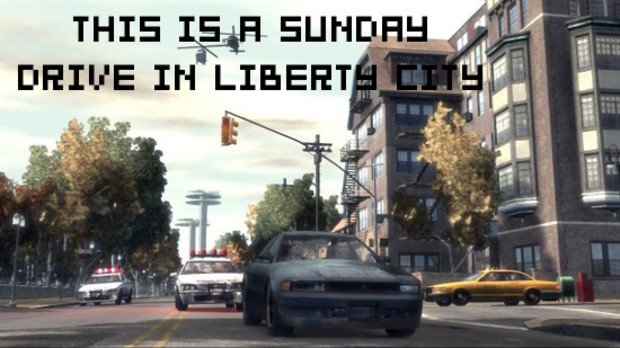 In Liberty City, they don’t prosecute the criminals that squeeze the life out of our citizens. Instead, the cops simply take the perp’s weapons and maybe a quick bribe and turn him loose. Worse yet, they may chase the guy for awhile, have him get out of their sight, and then simply lose interest. What other city in the world has police like this? The cops are just another gang in Liberty City.

How else can you explain that you can walk right around the corner in several areas of the city and find an arms salesman with everything from Uzis to hand grenades? How else would you explain that criminals can show up at a local hospital full of bullet wounds and carrying illegal weapons, only to get patched up and released, no questions asked?

Even the good cops in the city can’t do a whole lot to fight back. The crime has gotten so bad that lesser crimes such as reckless driving or simple assault don’t even get investigated, let alone prosecuted. Just the other day, I had a guy run a red light, t-bone my Blista Compact, and simply keep on driving. I called the police to report the incident, and they laughed at me and hung up. They laughed at me.

Hey, it could be worse, right? I could have come out from Club Liberty to find my car had disappeared altogether, stolen only to show up a couple of weeks later at some roid-rager’s used car lot. You think the cops would care then, either?

Things aren’t getting better anytime soon. Even when you try to get out and have a little fun, you’re never more than an itchy trigger finger away from being caught up in gang activity or a good old criminal rampage. My cousin was at a local bowling alley three months ago, and there were a couple of Russian guys a couple of lanes down. Well, they must not have been pleased with how the pins were falling, because before you know it, there were 32 dead people and 6 injured at the alley, including three cops who actually tried to stop the carnage outside of the alley. What do you know? The suspects were never caught. The police chief did get a nice new boat a couple of weeks later, though. 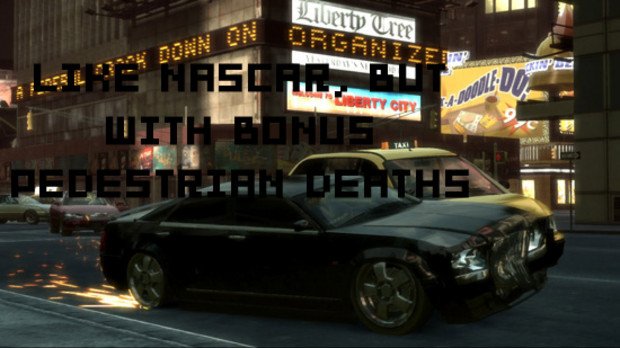 It’s gotten to the point where people have taken to shooting pigeons off of street lights for fun. Right in broad daylight, a guy will pull out a sniper rifle like it’s no big deal, take their time to line up the shot, and poof! Bye bye, Mr. Pigeon. Apparently there’s some kind of contest or something, but that’s just another example of a great way to pass time in Liberty City. That’s besides some of the other favorite Liberty City activities, like street racing at 110 mph as pedestrians run in fear, or taking that special someone to a fine establishment like one of our local strip clubs. If you don’t like the dancers that night, hey, whip out a knife and hack a couple of them up before shooting up the place with an assault rifle. That’s what one guy decided to do a few weeks back.

At some point, you have to wonder if we’ll ever fight back. You know, the anonymous, regular citizens of Liberty City. Will we continue to let a handful of criminals and the crooked police run the whole city? Will we finally organize and take back the community that was once ours?

Nah, we’ll probably just keep on walking around aimlessly, occasionally running from a random shooter or car speeding down the sidewalk.