The regular anime convention may not have much of interest to you, Destructoid reader. Aside from the rare scantily clad cosplayer (more on that later), I’d guess that many of you would rather be at home gaming than plowing through the geeky masses at these events.

Baltimore’s long running Otakon is a bit different. They call themselves the “convention of the otaku generation,” and put focus on more than just anime and manga. Over the past 14 years, videogames have been a major draw for attendees, and this has caught the attention of game vendors. We managed to speak with a few of these very busy game vendors to talk about how Otakon is different from the average anime con.

Hit the jump for more on Otakon’s game vendors.

If you wanted to check out the import gaming goodness at Mad-Gear’s booth at Otakon this year, you had to be brave and elbow your way through the masses. Attendees crowded around to get a peek at their massive selection of import retro games, consoles, and accessories. We happened upon the booth as Mad-Gear’s Carlson held a wireless credit card machine to the sky in an attempt to get a better signal. With his other hand rested on his hip, he looked like some kind of import gaming superhero.

Mad-Gear attends 22 conventions a year, but says that Otakon is always the most successful event for them. Carson feels that the attendees of Otakon are more likely to be gamers, and says that some are even more “gaming aware” than ones at gaming events.

“I’ve been to game events where people would come by and say ‘oh, these games are in Japanese’ and then just leave,” Carson says. “They just don’t get it.”

He attributes some of the awareness to Otakon’s gaming hall, which he feels has “one of the best game rooms out there.”

“Otakon is the best for us. It kills over the game conventions,” he says. “The people here are passionate about it, and you don’t see that in some of the industry stuff.” 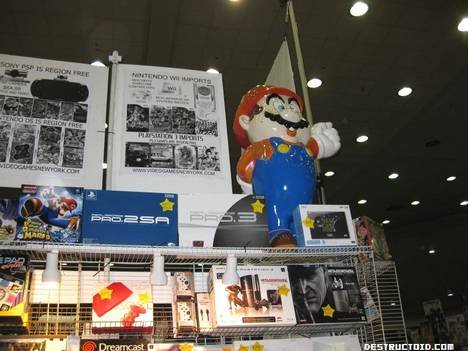 Video Games New York had a large booth in the dealers hall at Otakon. A statue of Mario crowned a large selection of the newest import titles for all consoles, and was flanked by displays of rare retro titles. This marks their third year at Otakon, which is one of over thirty events they attend across America each year.

Video Games New York also favors Otakon for sales and reception. A representative tells us Otakon is their “best show of the year, no contest.”

They feel that their sales success is due to the Otakon being well-established and respected. Their representative also points to Otakon’s high attendance numbers, which almost hit 26,000 this year.

“I’ve brought almost everything in my store this year, and I’ve already sold out of a lot of stuff,” a representative told us Saturday. “The sales here are so strong that this is almost a Christmas for us.”

Between these two vendors, a couple of other new game vendors, and the convention’s free play gaming hall, there’s ample reason for gamers to brave the crowds at Otakon.

Check out the gallery below for images of the videogame offerings at Otakon 2008.