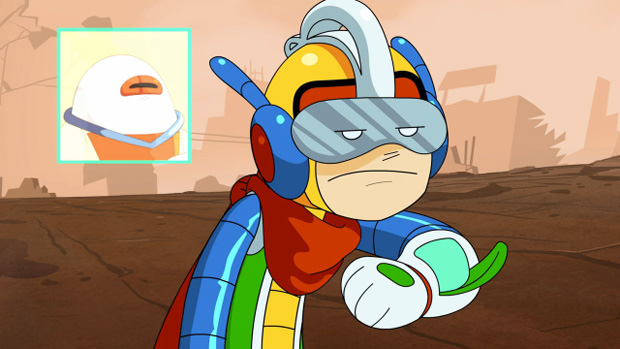 And it stars Rob Paulsen of Animaniacs and TMNT fame!

I know you’re looking at that headline and saying to yourself, “What the hell is Bravoman?” It’s a fairly unknown Namco arcade game from the 80s that was later ported to the TurboGrafx-16 — and incidentally is also available on the Wii Virtual Console. The titular star is a send-up of Japanese superheroes who can extend his bionic limbs like Stretch Armstrong. Got that? Cool.

So why is it getting a cartoon? It’s all thanks to Namco Bandai’s ShiftyLook initiative, which breathes life back into forgotten Namco properties through the power of webcomics. Bravoman: Super-Unequaled Hero of Excellence is among the more popular of those comics, thus it was selected for an animated treatment. Kotaku even has an exclusive 30-second preview clip, should you want to give it a quick watch.

What truly catches my attention, however, is the voice cast. Playing Bravoman is none other than Rob Paulsen, best known as the legendary talent behind Raphael and Donatello in the 1987 and 2012 Teenage Mutant Ninja Turtles series respectively, as well as Yakko Warner in Animaniacs. Also lending his pipes is the fairly illustrious Dee Bradley Baker, who I learned just this second was the voice of Olmec in Legends of the Hidden Temple. Holy fudge!

If Bravoman works out well, I hope Namco Bandai decides to adapt the Klonoa comic next.