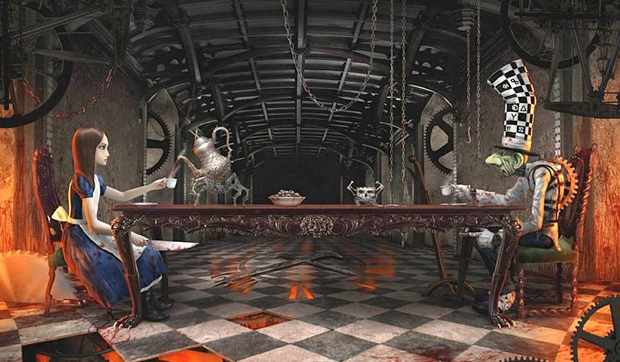 [Update: EA’s not ready to talk about this, apparently. We were told today that “We have no new news to report for Alice: Madness Returns.”]

According to Alice designer American McGee, the once PC- and Mac-only American McGee’s Alice is coming to consoles as a downloadable title.

Speaking with CVG, McGee says: “There’s also going to be a pretty significant release which is the original Alice brought over to the consoles so that a person who’s purchased [the upcoming sequel] Madness Returns gets a download code and is able to bring Alice 1 onto their consoles and play through the entire original game alongside playing Madness Returns.”

It’s unclear if the McGee means a code will ship with every copy of the game, or if it’s a pre-order bonus. It’s also unclear if the game will be available as a separate, paid download for folks not interesting in purchasing Alice: Madness Returns. We also don’t know if McGee passed out after that statement, because that’s a crazy run-on sentence.

To answer some of the questions, and to verify that McGee wasn’t speaking about a dream he had, we’ve contacted publisher Electronic Arts.