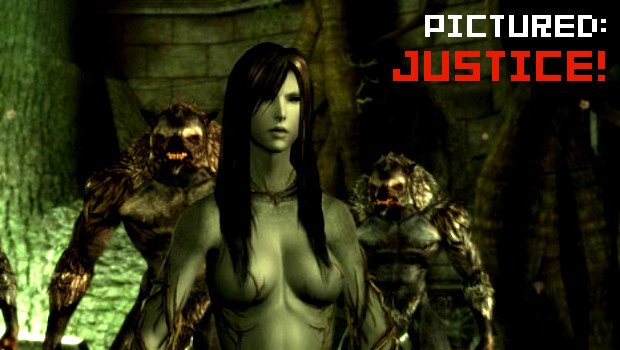 Sex in games has become quite a hot topic of late, with titles like Dragon Age: Origins, Mass Effect and Alpha Protocol injecting a little sordid filth to keep things spicy. While some rail against the inclusion of such titillating chicanery, there is an organization that has demanded even more flesh on display.

That organization is GoTopless (link is NSFW), a group dedicated to eliminating double standards when it comes to women being allowed to go topless in public. A noble cause indeed, I think you’d agree. The women (and pervy men) behind this group recently applauded Dragon Age‘s commitment to bare breasts, but voiced disapproval in the lack of visible nipples.

“Our organization claims  that women have the constitutional right to go topless public in the name of gender equality and we are happy that videogames are exploring that possibility,” states the organization, “though we notice in the picture that the character’s hair is conveniently covering the ‘indecent’ nipple ….”

GoTopless leader Nadine Gary adds: “Breasts are noble parts of the anatomy. Free your breasts, free your mind!’ is our message to women.”

I very firmly support breasts of all kinds, and believe that we should help encourage this campaign as much as possible. As far as I’m concerned, if you disagree with this organization, you are literally Adolf Hitler, and you should be considered a monster of Biblical proportions. More boobs, please!

Man, this story is great.