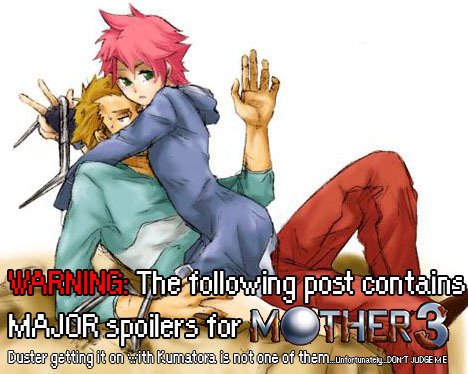 [Editor’s note: EarthbounderNess shows us how Mother 3 could have potentially ended. — CTZ]

— WARNING: This post contains major spoilers for Mother 3. If you have not completed the game, I advise taking a stoll elsewhere until you do finish it. By “elsewhere”, I mean go play the game right now. Seriously, if you haven’t beaten the game, go away. I’ll punch a puppy while impersonating Chad Concelmo if those who have not beat the game do not leave this very instant.

This post will also contains my opinions on the particular subject. I do not claim to be correct in any way, shape or form. —

Those of us who have beaten the Mother 3 have fully experienced the sorrow filled moments during the final confrontation at the location of the seventh needle. The one on one showdown between Lucas and the Masked Man, Claus, his own brother, was just a step short of tearing the players heart out of their chest. From Hinawa’s pleading to the bastardization of the Love Theme becoming pure throughout the fight, every moment in the game had hit exactly where it needed to.

But, what if Hinawa’s words never reached Claus? What if Claus had no semblance of humanity left in him to bring out? What if Lucas never had the option to simply take the hits and hope Claus came to his senses and instead, had to completely destroy the Masked Man without holding anything back, without any hope of his brother being saved?

Strangely enough, Shigesato Itoi may have originally planned for the end of the game to make those “What ifs” a reality.

What you see are Masked Man sprites found within the unused game data. Now obviously with something like unused data it’s anyone’s guess as to what the data was intended for, but obviously this time around, we’re going off of what I think.

First off, take note that the animation is not in the order of things happening, but just a compilation of the unused Masked Man sprites. The first animation sequence is the longest, being the downfall and explosion. The second is the short animation of what looks like the M.M. being suspended in air. The last sequence isn’t even an animation, but a display of the M.M. being operated on by machinery.

The popular idea (and the one I agree with) of what the Masked Man sprites were intended for is simply more displays of Claus having become inhuman, but having lost his humanity further than what was displayed in the game. My personal take on each of the sequences is:

With sequence one, the death of the Masked Man while still having his helmet on is a huge deal, as it touches on what I’d spoken of with the “what ifs”. The removal of the helmet, revealing Claus, was to display that Claus had been reached by Hinawa’s words and Lucas’ determination. Claus dying without having been “saved”, would have destroyed Lucas emotionally.

Lucas having been crushed by the inability to save his brother in any way would then lead into what is referred to (by many people speculating on the issue) as Lucas’ Nightmare. This degenerative state of Lucas’ mind is what also is believed to be the actual final battle, after the Masked Man. I believe that sequence two of the unused Masked Man animation is a deathly looking Claus haunting Lucas right before this:

Credits go to MoupiMoupi and yurugu3 from youtube for the video

Those of you who played through Mother 2/Earthbound will recall the battle with Ness’ Nightmare, the Mani Mani Statue. After seeing what’s believed to be Lucas’ Nightmare, it’s my conclusion that Ness had it good by comparison.

The question remains though, what manifested into Lucas’ Nightmare? Some say that it’s the dragon that awakes after the final needle is pulled testing Lucas. Others say that it’s Giygas attempting to re-enter the world through the horrifying state of mind that Lucas is in. I like to go along with the simplest of explanations.

After having gone through so much in his life, losing his mother and his brother, his father leaving him on multiple occasions, seeing the town he grew up in become corrupted by an extreme evil and then finding out that his dead brother had been transformed into nothing more than a puppet … I’d say that’s plenty of damage to the poor boy’s psyche.

In the first part of the video, you see two odd images distorted. The first being a silver robot-like figure with his left eye covered by some sort of device (looks similar to a scouter), leading us to believe that it’s Claus. More specifically, it’s a hybrid of Claus’ emotions and the Masked Man’s inner appearance, as the robot does not look threatening, yet it still holds the features of the Masked Man. The second image is that of a golden angel-like figure, showing Lucas’ wish for Claus in the after-life, hoping he can attain peace in death as an angel after his suffering in life as a demon. 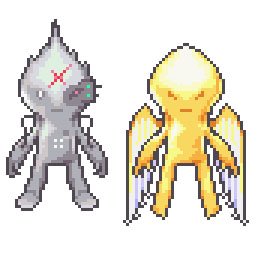 After the first two forms, Lucas’ Nightmare takes a trip through Claus’ life before he was used as Porky’s toy. We see Lucas, then Claus clothed, naked and gray. Lucas saw himself and then Claus, his own twin remembering their bond as they grew up, then at the time of their birth (naked) and finally the horrid machine Claus became.

The last phase of Lucas’ Nightmare is by far the most disturbing and also the reason that many people believe that it was Giygas attempting to re-form/re-enter the world. A ghastly image of Claus slowly becomes a red outline and shortly after that morphs into a screaming mass of red. The thought of it being Giygas comes from the distortion and the red. Other than that though, it’s completely baseless since he was annihilated completely by Ness and crew. This phase is Lucas coming to the slow realization of what he’s done to his own brother, little by little the weight of his actions pushing upon him are what causes the slow warping of Claus’ image.

What comes after the battle is more than likely one of two outcomes. The first outcome being Lucas overcomes the guilt and hurt of having just taken the life of the brother he was unable to save and goes on to pull the needle and awake the dragon. The second outcome is that Lucas is so overburdened by his own mind that he’s unable to perform a single action, leaving the game with a bleak and desolate end with the world remaining brainwashed in New Pork City and the final needle left to sit there for eternity.

I can’t quote Itoi directly on why Lucas’ Nightmare was removed from the game, but I do recall it having to do with him wanting to focus on the theme of love as opposed to Earthbound’s focus on the bizarre and twisted. It also had something to do with being geared toward a younger audience as well.

So there you have it folks, my lengthy, more than likely overly-complex take on the missing Claus content and Lucas’ Nightmare. There is more content that was removed that was left in the data, but those things I’ll save for another day.

I leave you all with Duster being a badass. 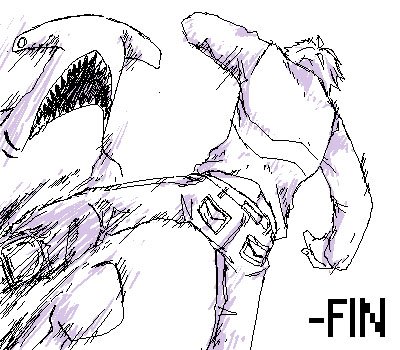