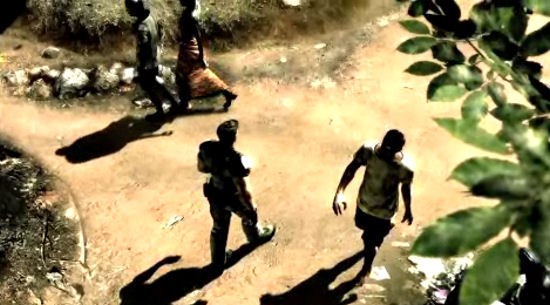 When the trailer for Resident Evil 5 was released, it caused quite a stir with its imagery of Chris Redfield, a white man, going to a foreign country to shoot black zombies. Before we had even seen the game in full or known any details on the story, there were those in our society willing to brand it racist, to extrapolate an entire metaphor and mindset behind this game from five minutes of footage.

The majority of us laughed at such ridiculous notions, and didn’t see anything wrong with the trailer, but according to N’Gai Croal, as we discussed yesterday, that was the wrong opinion and we need to see the inherent racial undertones in this five minute video.

So once again, this “controversy” has reared its ugly head, as we get to hear a black point of view about this oh-so racist game. Well, this is unconventional, and some would say impossible, but I’m going to throw a white opinion into the ring. I know, I know, white people aren’t really allowed to have opinions on racism if you talk to some individuals, but let’s throw convention to the wind just this once.

I want to talk about Resident Evil 5, and I am going to.

No matter what side of the fence you are on, it firstly cannot be denied that Capcom is taking a bold step by setting Resident Evil 5 in Africa. Racial sensitivity aside, it is a fresh and new environment, one that we are not used to seeing in videogames at all. The bright sunlight, arid backdrop and cultural uniqueness is something that rarely crops up in a game, and for that I commend Capcom thoroughly. This, however, is the very crux of the reason that I am so upset when it’s instantly crucified as being racist.

We complain about “dark” and “gritty” games all time, with their gray urban environments and complete lack of color. Here, we finally have an action game that intends to do something different, and it causes a problem. This game takes us to a mysterious (for many of us) and foreign land, and there are those that feel it should not be allowed.

The sad thing is, this kind of “controversy” was utterly predictable. While I merely saw a cool game trailer, the very fact that there were naught but black zombies gave me a nagging feeling that we were about to hear some bullshit, and hear it soon. I was not disappointed, as the Black Looks blog soon jumped on this five minutes of game footage to tear it apart as the racist propaganda it so clearly was:

The new Resident Evil video game depicts a white man in what appears to be Africa killing Black people. The Black people are supposed to be zombies and the white man’s job is to destroy them and save humanity…

This is problematic on so many levels, including the depiction of Black people as inhuman savages, the killing of Black people by a white man in military clothing, and the fact that this video game is marketed to children and young adults. Start them young… fearing, hating, and destroying Black people.

The sheer level of presumptuous arrogance found in Kym Platt’s blog post was offensive, and racist in its own right. This woman insisted on capitalizing the word “Black” while not giving “white” the same level of reverence, and throws in claims like “supposed to be zombies” as if Capcom’s intention was to actually promote the murder of black people. She also seemed to think the game was purely “white man” propaganda, despite the fact it’s being developed in Japan. Again, all of this she managed to glean from a five minute trailer.

There is a lot I could say about Kym Platt and the problems I find with her self-serving complaints and insistence on dwelling on long-passed history, but I’ll stick with Resident Evil. That Platt was able to dream up this entire racist motivation for Resident Evil 5 is little more than self-parody, evidenced by the fact that I totally predicted something like this would happen before it did. However, Platt is a self-segregated non-gamer with no understanding of Resident Evil. She looks for ways to be racially offended, so we shouldn’t be too surprised.

N’Gai Croal, however, is a different matter.

“Wow, clearly no one black worked on this game,” was Croal’s gut reaction to the Resident Evil 5 trailer, and frankly I expected better from such a learned gamer. Croal compared the trailer to a game set in 1940’s Europe featuring emaciated Jew zombies, as if a modern-day African village was anything that could be directly compared to such a game. As I told N’Gai myself, the leap in logic was utterly astounding, and not something I would expect from him. Like Platt, Croal seemed to pull a lot more from this five minute trailer than most of us:

This is why a game in which a white protagonist will be shooting hundreds of black zombies should be handled with more care than what’s been evidenced by the trailer. Classic racist stereotypes: a silent or unintelligible populace, barely distinguishable features–heck, they’re barely lit–and unmotivated hostility towards the white hero even before they go straight zombie on us. A grab bag of diasporic traditions: Senegalese vocals, Haitian voodoo. And that white guy killing all those black zombies. For you, this apparently adds up to a preview for one cool game. For me, I’m saying to myself, if they’re this careless at best and racist at worst in five minutes of linear content, what’s in store for us in 10 hours of interactive gameplay?

This is taken from the debate Croal and I are currently having in the MTV Multiplayer blog that posted his comments on the trailer. Croal, who himself made sweeping racial generalizations with the “no one black worked on this game” comment, said Capcom handled its representation of Africa “with all of the grace of a dancing elephant.”

Re-watching the trailer, even looking for the “racist at worst” elements that Croal can see, I cannot really find what is so terrible. Croal talks about the villagers being “silent or unintelligible,” but if you look at the trailer, there IS no sound for the first minute. No background noise, no talking, from anybody. They are not being “silent or unintelligible”; in fact, you see two characters clearly having a conversation with each other. You simply don’t hear it because you don’t hear anything.

He talks about them being barely lit and lacking distinguishable features, and again that is simply untrue, making me wonder how many times Croal watched this video before drawing his conclusions. I can see them all quite clearly, personally. He talks about “unmotivated hostility” towards Chris, and again … no. Chris walks through the village quite undisturbed, as the villagers go about their daily business. The only non-zombie hostility seen in the game is a crowd of black villagers throwing stones at … oh my word … not Chris Redfield, but another black man who seems to be causing them trouble!

The very fact that Croal provided me with this slew of examples that simply don’t exist betrays his own willingness to look for racism that isn’t there, to be offended by that which did not set out to offend.

At the end of the day, this trailer is not racist, nor is it particularly ignorant. Chris Redfield walks through an African village of African villagers doing their daily business, and apparently being involved in some sort of internal conflict, and then they all disappear, before the non-discriminatory virus takes effect. That’s all it is. It’s really incredibly simple, but there always has to be a group of people willing to make it more complex than it has to be. This is all part of that “one race is sacred above all else” attitude that keeps racism going rather than makes us all equal.

And this is why we can’t have nice things.

Croal would seem to like Capcom to tip-toe around this issue, because of the “history” behind the images found in the trailer, and coming from a gamer, I find that disappointing. Capcom should not have to restrict what it wants to do just to avoid the risk of upsetting the easily offended, or rambling self-servers like Kym Platt.

Many of us would like to see videogames take a step forward as a legitimate art form, or at least be taken seriously as an avenue for compelling storytelling. If a videogame cannot be set in Africa without causing this kind of faux-controversy, however, we really are taking two steps back for every step forward we take. I have a fearful image of racial activists putting pressure on retailers when this game comes out, doing what they can to boycott the “bigoted” videogame and using bullying tactics and racial blackmail to have their way. Croal talks about retailers not stocking this game, and it could be possible — though not through any fault of Capcom’s, more the fault of an angered “black community” (such a horrible, segregating term) and the retailers who are scared of upsetting them.

If we can’t set a horror game in Africa without this kind of childish over-reaction, then we are nowhere near close to having videogames taken seriously, or to them being brave enough to show us some diversity. What Capcom has done deserves our support, unless we want every single action game to be set in the same old warehouses, with the usual collection of crates and exploding barrels. I’d rather see developers encouraged to take the kind of broad step seen in Resident Evil 5, rather than discouraged.