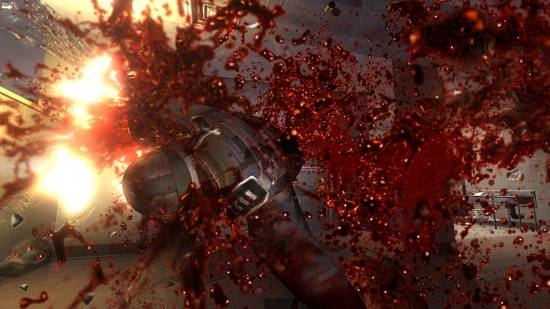 Warner Bros. Interactive has just released some new media for its upcoming PlayStation 3, Xbox 360, and PC title Project Origin and well … I guess I’m not playing this game with my kid.

In this upcoming sequel to 2005’s F.E.A.R., you’ll play a Delta Force operative who — instead of using traditional weaponry — dumps buckets of pig’s blood on his enemies. OK, that’s not true at all. But what in the hell is going on in that screenshot up there? The average human has two gallons of blood in his or her body, and I swear what we’re seeing is about 17 liters splattered all over the screen.

Project Origin is set for a fall release, and while it has yet to be rated by the ESRB, I have my suspicions it’s not going to be E10+.