The open beta starts next week

OnRush kind of crept up on me. Codemasters, possibly the king of racing publishers, is mostly known for its realistic simy racers with few exceptions. So when I saw the wild, screaming rainbow flavored OnRush, I didn’t immediately put two and two together that this would be coming from a stable that knew its stuff.

As it turns out the studio actually producing it really knows racing, as OnRush is from none other than Evolution Studios and its ilk, the team that worked on MotorStorm and Driveclub. Listening to game director Paul Rustchynsky on a conference call for the event, you could hear the passion he had for the genre, and I think that translates pretty well based on my time with a pre-release copy. 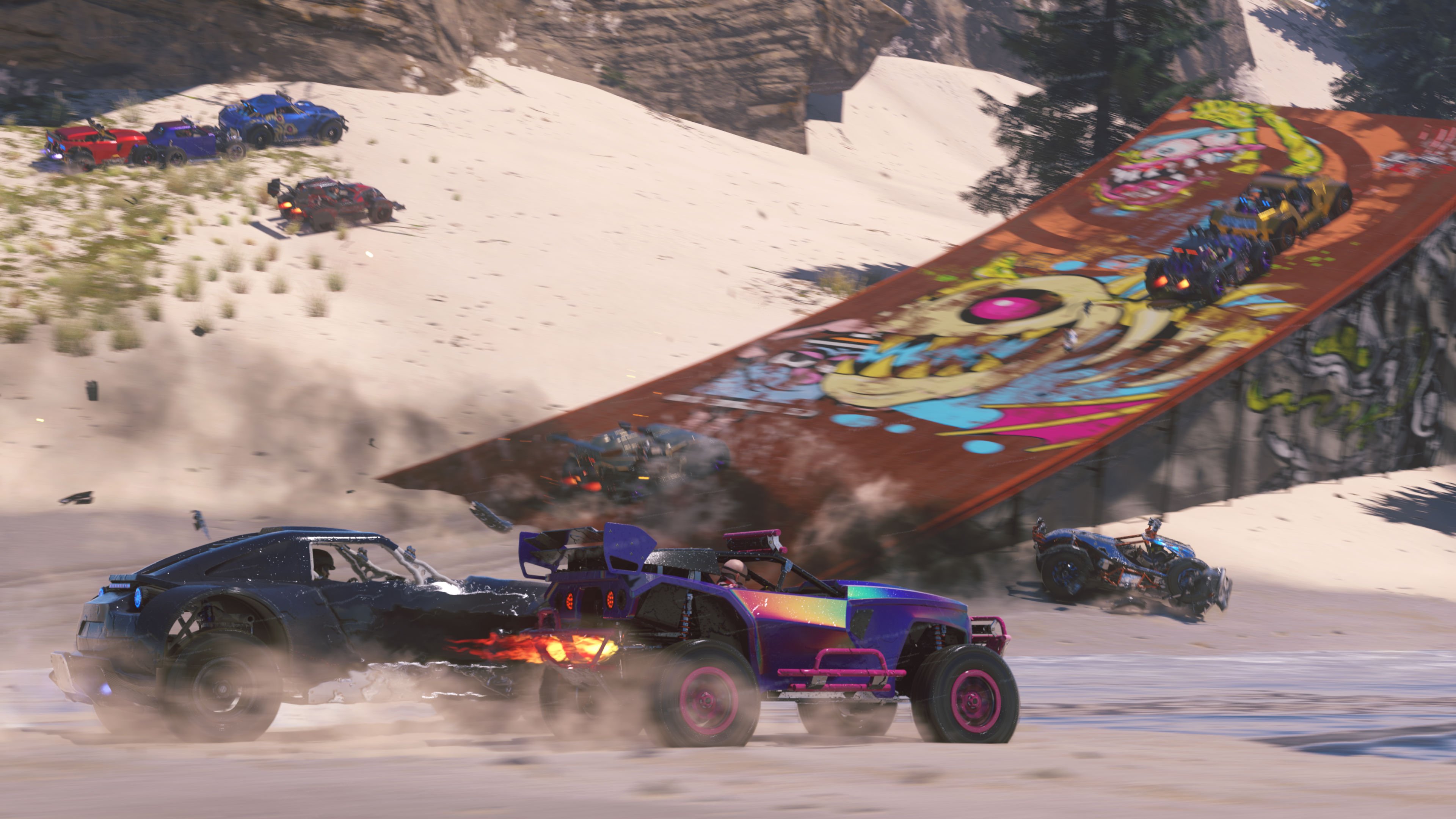 OnRush isn’t a conventional racer in any sense. It operates on a “stampede” mentality, meaning all players are going to be funneled into the same part of the track at all times. If you pull ahead that’s fine, but you probably aren’t going to be in the front for long as stragglers are constantly getting pushed to the front, and it’s tougher to earn coveted boost meter when you don’t have as many opponents to smash.

In most racers this is known as a “rubber band system,” and it’s polarizing as hell. The thing is, OnRush fully embraces it, because it operates more like a car brawler than a traditional “racing game.” So far Codemasters have revealed four modes for OnRush — Countdown (gather gates in a slalom style fashion), Overdrive (boost as often as possible for points), Switch (three stock lives, shifting vehicles as you die), and Lockdown (king of the hill with control zones). All of this madness takes place across 12 tracks and as you can see, none of it involves “completing laps faster than your opponent.”

Lockdown is easily my favorite. It’s the least abstract as you can always tell what’s going on, and it’s where the rubberband concept works the most. The constantly moving hill can get pretty insane at times when it darts to and fro between deadly pillars and pitfalls, and knocking opponents into a wall or sending them off a cliff actually matters with a small respawn time penalty in tow — allowing your team to calmly bully out the opposing faction and take a hill for points. Switch, which draws inspiration from Call of Duty‘s gun game, is also a standout. It’s basically team deathmatch, but after each death you’ll morph into a bigger car. Starting on a frail motorcycle you’ll eventually spawn into a truck, but at that point you’ve given up a decent amount of points to the other team. We need more of these batshit sort of modes in racers.

To accomplish all of this you’ll need to adhere to the game’s first commandment — always be boosting. Popping off tricks while jumping (which is easier for motorcycles to pull off), getting close to surfaces, taking down enemies or even NPC racer fodder — that sort of arcade racer silliness boosts your…boost meter. There’s also a nice little touch of knocking over “graves” (read: avatars of players) that drop when opponents die. Hilariously in a few sessions some graves were smack dab in the middle of a giant rock — forcing me to do some fancy drifting to pick it up (I was promptly smacked into the wall by a truck and never tried it again).

What’s even more interesting is its “classed-based” system, spread across several categories of vehicles. It’s not quite hero shooter hokey, but there’s eight racer types that range from motorcycles to buggies, to cars, to full-on trucks, each of which sport different types of boosts or minor abilities. Codemasters promises that this system is easy to understand if you just want to wreck people and play as a basic archetype, but also has enough depth to keep pros playing for months on end.

The most digestible traits include a car that can fuel teammates with boost, a support role similar to The Medic in TF2, and a vehicle with a super boost that makes the track harder to see, which can throw enemies off the scent of a gate in Countdown. Based on my experience these sort of advantages are present and can tip the scales for narrow wins in rounds, but for the most part, you really can just focus on the objective at hand and pick whatever vehicle you want and still have fun. 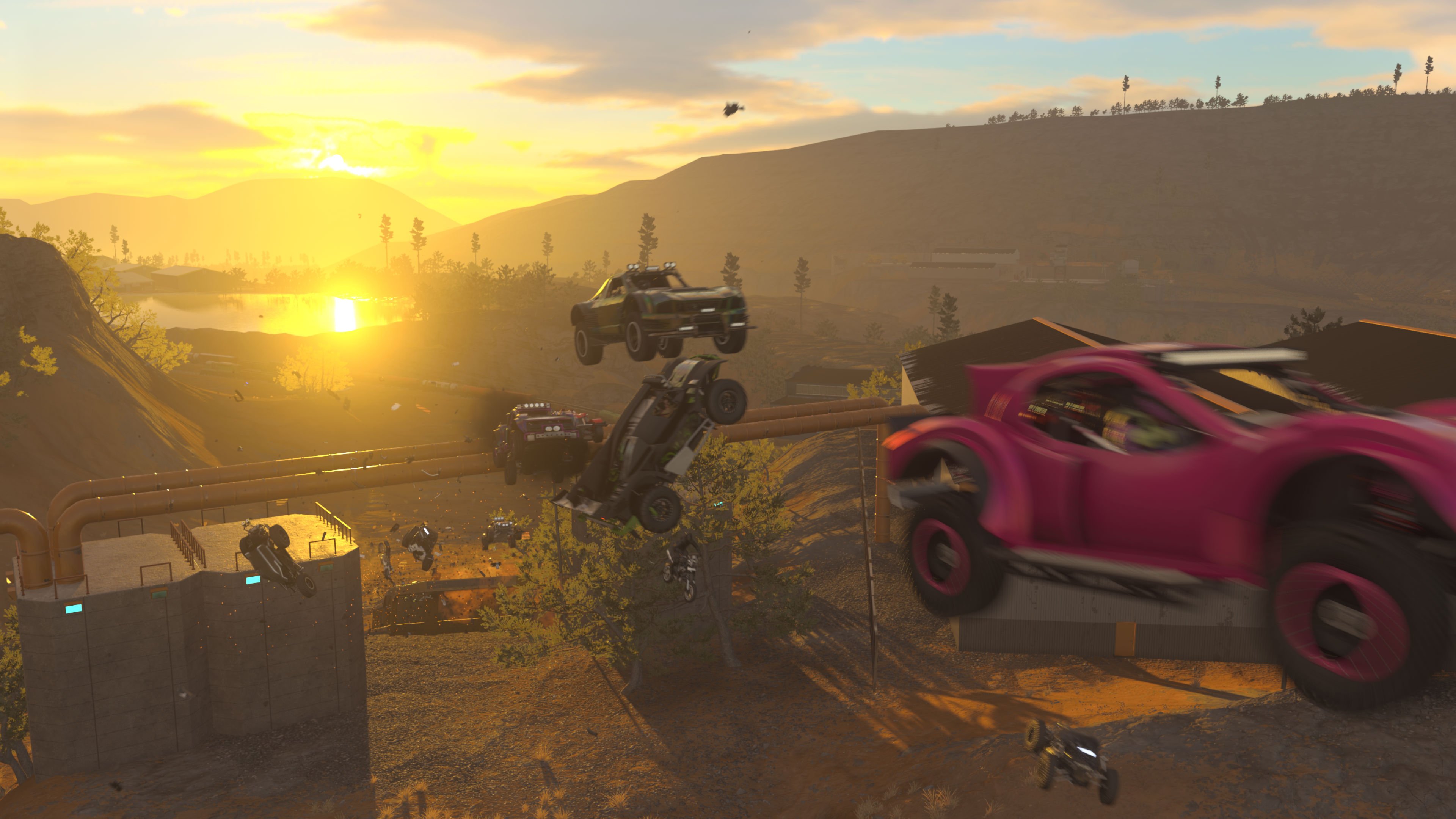 My big draw isn’t all of these concessions for online play, but OnRush‘s adherence to an old-school racing mentality that’s often missing in this modern era — an event-based campaign with co-op support. Sure online play is great, but there’s been a worrying dropoff when it comes to actual solo modes in games in pretty much every genre. “Games as a service” makes money hand over fist (loot crates are in and seem incredibly innocuous based on my time with them), but I appreciate the fact that Codemasters is giving solo play a punt.

OnRush is coming in June on PS4 and Xbox One, and based on its respectable overly-arcadey racer shell, it’s going to be a pretty fun time. You can give it a go next week for yourself in its open beta run.