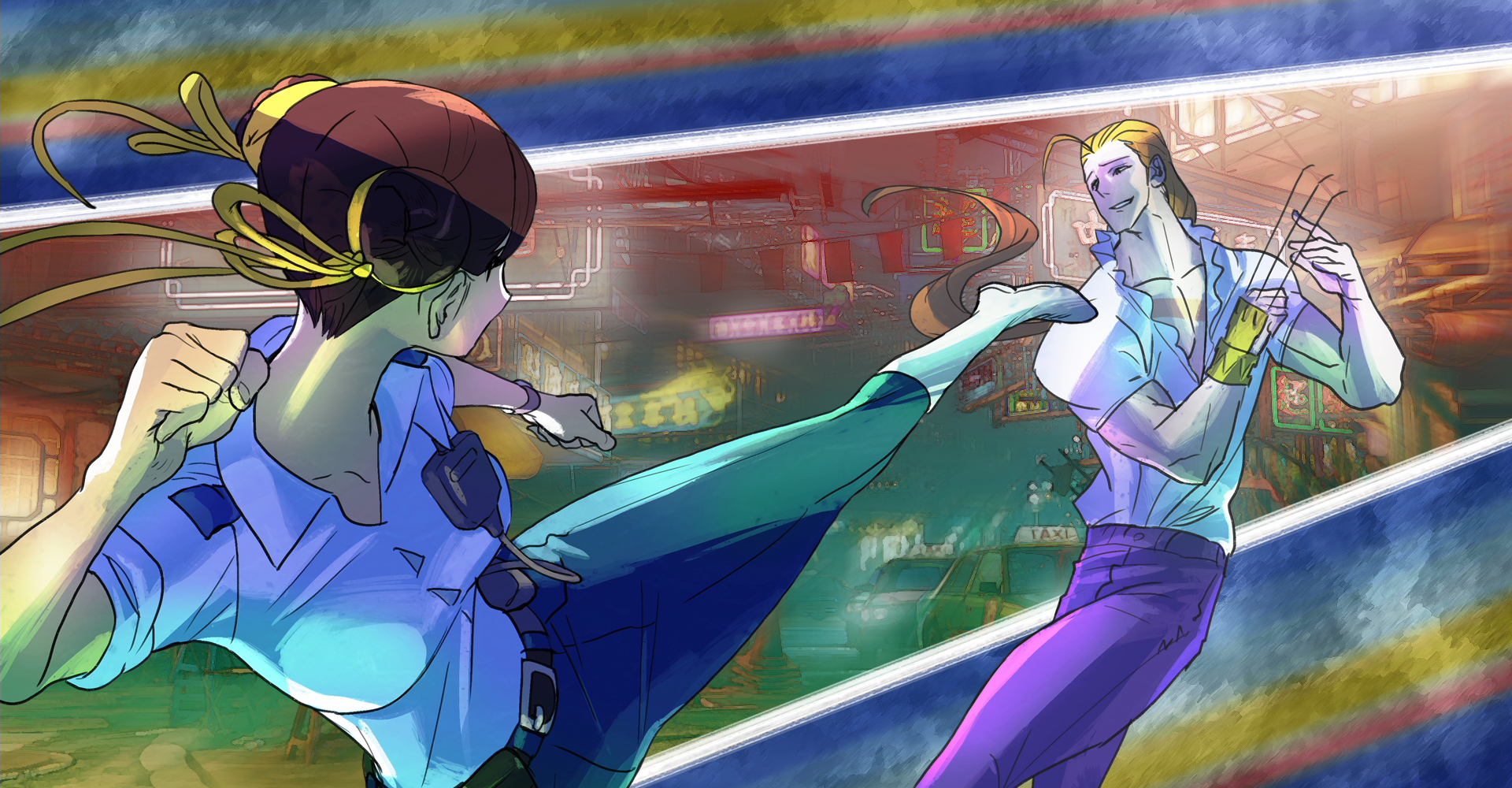 Aside from the immortal Street Fighter II and the clever (in a “Die Hard is my favorite Christmas movie” kind of way) Super Puzzle Fighter II Turbo nod, Street Fighter III is probably my favorite in the series. The number of unique animations, the art style, the famous Daigo parry that I saw before “esports” was a phenomenon observed by everyone from ESPN to HBO to university.

It was a bold move, leaping far flung into a new chronology of stripping it of most of the familiar faces that make up a typical Street Fighter roster (only Ryu, Ken, and Akuma were present before Third Strike brought Chun-Li back). It also might not have been a great idea for the series as a whole. It’d be a decade before the Street Fighter IV resurgence.

I sat down with Street Fighter producer and perpetual-smiler Yoshinori Ono last week to talk about Street Fighter V‘s hitherto undisclosed story mode and the series in general. I did so with Third Strike on the mind, having played a bunch of it two weeks prior, most of which was spent getting mad at my pal’s Dudley. And I wondered, with SFV aiming to bridge the gap between IV and III, which is at the end of the timeline, if another full reboot like Street Fighter III would ever be possible. I like the promise of newness. I also asked this before Street Fighter V — which, with its games-as-service model might also coast through an entire console generation like its predecessor — can even get out the door, because I am greedy.

Ono, golf-ball-sized Blanka toy in tow and wearing a Hakan-red SFV shirt that looked straight out of a convention swag bag, laughed, as he often does. Third Strike was one of his first projects at Capcom, long before he’d effectively become the public face of Street Fighter.

“What we actually learned through from Street Fighter III and putting in all those new characters we found out that the really hardcore people really enjoy it,” Ono said through a translator, though pantomiming enough that I understood about 30% of every answer before the English came in. “They really enjoyed playing all the new characters and figuring out how to use them, but it was very difficult to bring back the old generation of players who played Street Fighter II because they weren’t sure, ‘Who is this character? Why should I care about them? Why should I play this game?’

“Now I’ve reached this super high point in the Street Fighter series…I can very safely say that as long as I’m involved in the game we won’t be taking that approach, of a lot of brand new characters.”

Hopes dashed. The me who sells his last good kidney for a PlayStation 5 is going to be crestfallen.

Still, fair. Ono helped resuscitate the franchise with SFIV and the steps forward with SFV are all admirable. There’s the “completely different direction” for post-launch content. Balance updates are all free for everyone, forever instead of tied to a new release with more confusing naming conventions (“it ended up segmenting everyone”). The first of six DLC characters is coming in March and playing through all characters’ stories, survival, or online should earn enough Fight Money to get that first character for free. Then the in-game store opens up for the first time (“SFV does not have any day one DLC”) along with new “Daily Challenges,” the long-term method for players to generate Fight Money. It’s a straightforward system that’s good on paper, one instance where “games-as-service” doesn’t leave me shuddering.

The big news today is that there are individual character stories, per usual (“we always felt that that was kind of enough”), but also a big story with over an hour of in-engine cinematics coming in June as free DLC. “In Street Fighter IV we set out to try and bring everything together,” Ono said. “We wrote each of the character’s stories so it all kind of makes sense. But even after doing that there was a lot space in between where we finished off in Street Fighter IV and where Street Fighter III was. We’re finally going to be encapsulating the entire Street Fighter universe.”

While the pro scene helped carry Street Fighter IV further than those of us who sniffed around its first iteration based on name alone, “a lot of the casual fans were speaking up” with regards to more story (be it in a new game or as a new anime series).

“We came back with that feedback and thought about it,” Ono said. “We saw that Ubisoft’s got these immersive, awesome story experiences like with Assassin’s Creed; we have it with Resident Evil; and looking at Mortal Kombat in recent history, they’re trending that way as well.” Erhm — Assassin’s Creed‘s story? Ok. That’s where the June story expansion comes in to offer “a very clear picture of the Street Fighter universe” up to that point, with characters’ individual stories cluing them in on other finer details. “We’re really hoping people are going to become new Street Fighter fans throughout that process.”

A story isn’t the only consideration for new players, for new potential fans. The word the team most frequently uses to describe Street Fighter V is a “reset,” an even playing field. Ono notes that the SFIV player base “narrowed very quickly,” likening it to the best baseball players working their way into the pros, and other onetime-players petering out. So you get characters like Rashid, meant to be an easy choice for new players. “The director was nice enough to design the character that way,” Ono said. “After he designed Rashid he came up to me and said, ‘Oh, I think this is someone even Ono-san will be able to use.'”

It goes beyond that, though. There are the new V-Skills, which are unique to each fighter, opening up a network of metagame possibilities. Parrying was a core mechanic in Street Fighter III. Here, that entire mechanic is only used by Ryu.

“How do we keep Street Fighter‘s DNA and at the same time have characters have their own personality,” Ono asked rhetorically. “This time, in order for Ryu to have his own personality” beyond the classic signifiers of hadoken et al, it’s the parry. “Adding personality to the characters was a really big deal for us.”

In Ryu’s case, that’s provided you can execute. “Even for somebody like me, or Matt sitting next to me, [the Mind’s Eye parrying] is also too hard for us to use,” Ono giggled. The point, though, is not just accessibility, but to “reset the playing field and invite as many new players as possible.” The V-Skills offer opportunity beyond that, “we understand that there are people who are out there who are playing neighborhood baseball.” There will also be leagues in online play to try and keep matches competitive by skill level.

Of course, Street Fighter V is also the “first product developed from the ground up with eSports in mind,” according to Capcom’s Matt Dahlgren. It will be balanced around the Capcom pro tour (where the game will run on PS4), meaning large balance updates will come during the offseason (January-February), giving pros enough time to react and train for EVO and the following Capcom tour.

The goal is to, “stick to our guns for a whole season,” though if any particularly egregious balancing problem presents itself (complete leaderboard and tournament dominance), there are quick fixes. “Knee-jerk reactions can stifle the community, it doesn’t give the respect it deserves to players who came up with those tactics, and it prevents the meta game from forming where players can come up with counter tactics,” Dahlgren said.

I asked Ono if the individual V-Skills made this the hardest Street Fighter to balance and they did seem to be a factor, but “balancing is always hard. It’s hard every single time.” Especially with the lack of an arcade release this time around.

Ono sees Street Fighter as a “a fighting tool” where the one on one battling reigns despite more effort put into single-player content. And so from designing characters that are a bit easier to use to, “input leniency we put in place so people feel like they can do what they’re trying to do with their characters,” the feel is important. “We’re offering bats, balls, and gloves,” Ono explained, with what must’ve been the fourth baseball metaphor, at which point I had to veer off course and ask if it was pure idiom or if Ono loved baseball.

“It just happens to be that Capcom is moving offices next door to AT&T Park [in San Francisco, where the Giants play] and as a result I’m super-looking forward to this move because now I’m going to have even more chances to see baseball games here in the US. But if this gets out into this article and people from Capcom USA read this then people internally at Capcom might think, ‘Hey, man, we got to do this freaking move just because Ono likes baseball!?’ So there’s a potential where I could be getting some complaints internally.”

The metaphors do go beyond a love for the sport a bit, though, as Ono praised the Major Leagues (be it Major League Baseball or the National Football League), which have done well in cultivating “sports as entertainment.” Versus shit people do for sport, like hunting or seeing how long they can look at local real estate pricing without eating a gun. And Street Fighter can be entertaining to watch. Especially if Ono gets his R. Mika wish.

“I kind of bought her way into this game by paying a bonus to the director and telling him, ‘Put R. Mika in,'” Ono laughed. He is “really looking forward to, at next year’s Capcom Cup, someone using R. Mika and doing the mic performance long enough to unleash the super powerful move to beat their opponent. Everyone’s going to get up and cheer, but at the same time they’re cheering they’ll be laughing their asses off.”

Just about the only people not cheering and laughing are folks carrying water for characters that have yet to be announced. Skullomania. Q. Sakura. Dan. Dudley. Blanka. Ono talked about unveiling Laura at the Brazil Game Show where, “everyone realized, ‘Oh, so, Blanka really isn’t in the game, is he?'” He gets the question more often than any snub, likely because of the toy Blanka he carries around.

Whether Blanka even fits in the Street Fighter V roster is, apparently, “quite uncertain because Laura herself has electric-based attacks so it maybe doesn’t leave a whole lot of room.” Ono picked up the Blanka figure from the table and asked:

“Is there any hope for you?”