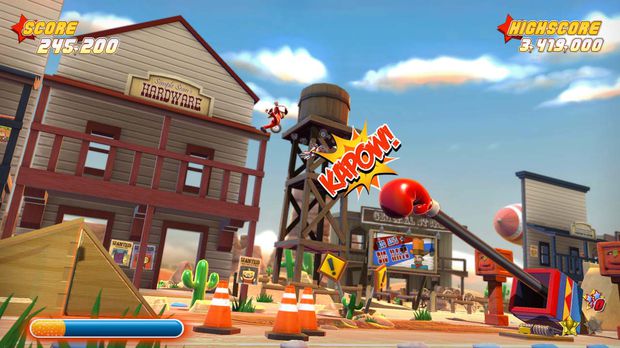 There are three reasons I’m posting this little factoid. One: Any chance to promote Joe Danger should be taken. Two: It’s a relatively interesting fact that only 10 percent of people completed one of the best downloadable games out there. 3: It comes from an incredibly interesting read by Joe Danger developer Sean Murray.

In the blog post he discusses why game length actually matters, but not in the way you think or in the way we normally talk about game length. I don’t want to butcher what he’s saying, but it’s a great and quick read. Near the end he points out that “only about 10 per cent of people who bought Joe Danger have completed it (their average play time is well over 20 hours). Most journalists didn’t get past the halfway mark.” He then questions whether developing the last levels was a worthy use of his time, and uses that as a springboard to round out his argument.

As one of the 10 percent who did complete the game, Sean, I have to say you didn’t waste your time at all. The way in which the final races tied together everything that the game had thrown at the player beforehand was fantastic, and by far one of the best closings gameplay wise to a game I’ve played through. I will admit, however, that I am still intermittently struggling to complete all the challenges on each course. Damn those time limits!

The Long Game [Edge, via Joystiq]