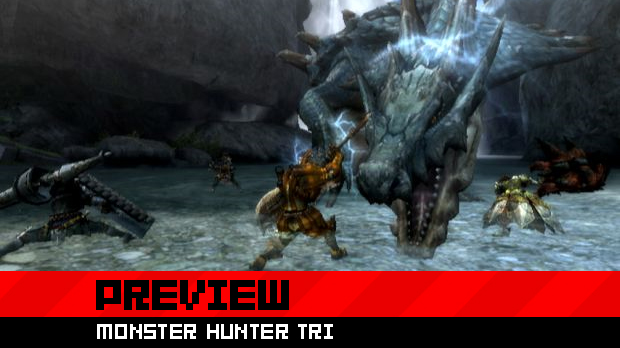 Look, when I think of Monster Hunter, the last thing I think about is the high school education system. Apparently I must be in the minority, as Capcom seems to think that Monster Hunter and education go hand in hand, which is why, in a move to preview Monster Hunter Tri for the Wii, they transformed a local club into a high school biology lab. Weird.

Considering Japan actually has classes on Monster Hunter, this isn’t so surprising. So in between an actual lecture from Producer Ryozo Tsujimoto, tasty snakes and odd drinks, we had a chance to play the English language version of Monster Hunter Tri. Sure, it wasn’t exactly like doing homework, but it was an educational experience. There’s some very cool things Capcom hopes to bring to North American and European players, and it looks like they are going to follow through on them. Especially interesting? How about a successful online infrastructure, that’s pretty damn cool. Hit the jump to find out more.

People looking for something entirely new to the franchise (now in its 7th release) will find some small important updates. Other than the graphical boost on the Wii over the PS2 and PSP games, players can expect the addition of the Slash Axe (a weapon that can be a sword….wait for it….or an axe), as well as underwater battles. Swimming works in a simple manner, and battles now have to deal with being on the same plane as the giant beast players must shamelessly slaughter. Monsters can also eat you now, so when in the grasp of a giant dino, you have to shake around to get the thing off you, or you die. Oh, and there’s a stronger single player narrative that involves an ugly-kawaii little acorn thing named Cha-Cha. Most people found this to be mildly vulgar, which is great.

The best news of the night was the simple fact that Monster Hunter Tri might get online multiplayer right for once. Instead of Friend Codes, Capcom gives you…a separate number code. Sure, it’s stupid, but it’s shorter than the 16 digit monstrosity Nintendo loves so much, and the only time you need it is to specifically add someone to your friends list.

Things get much more streamlined when you actually play with people. Like the way that guy plays? Send him a friend request. The end. No numbers, no rigamarole, no bull crap, just people who want to effing play a game together. Even better, the game has USB keyboard support, and there is no block on communication, even with randoms. Even better, Capcom is looking into WiiSpeak support for the Western release, but that’s still being worked out. All together, it’s like Capcom and Nintendo created something that might just be functional and worth gamers time. Coupled with the free downloadable quests, we might just have an online game worth playing on the Wii. Golf claps all around.

While Monster Hunter fans in Japan are stuck with a cheeky monthly fee to play, Capcom has not determined whether or not Western players will be paying the price. Hopefully, for the health of the game in America and Europe, we can see this subscription fee ignored.

Gamers will have a couple controller options when playing. For those who want something along the lines of the PlayStation experience, the Classic Controller and the Classic Controller PRO (now available in Europe) are the ways to go. It’s solid, and plays fine. For people looking to mix things up, the Nunchuck combo is the way to go. I played this set-up for most of the night, and considering Monster Hunter Tri is a slower paced game, had no problems working through this. Sure, slashing with waggle offered nothing new, but it was completely functional.

Capcom is making a risky move with at least one of their promotional slogans for the game: “The most beautiful game on Wii.” This is dangerous business, for while the Wii has put out plenty of good looking games, it has always been an affair of style over realism. Monster Hunter Tri looks to largely succeed with both style and realism. Distant waterfalls, central town hubs, character animations look pretty nice. Especially good are the monsters themselves, as they look both badass and fluidly animated. Apparently color vibrancy has been boosted over previous Monster Hunter games, which is a plus.

However, for the graphics of Monster Hunter Tri, things were not all perfect. While the game has the problem of flat textures for the ground and terrain, something was off about the screen quality. Even in these screen shots, it’s obviously a somewhat muddy looking game. Talking to other journalists at the event, it was suspected that the consoles were not at optimum settings for the game and monitors, so everything was particularly grainy and looked like a someone spread a smear of lotion across the screen. Is Monster Hunter Tri the best looking game on the Wii? For this writer, probably not, but considering the monster options and customization, Capcom deserves certain props.

Monster Hunter Tri is really damn exciting for the Wii. It’s a hardcore game with a hardcore ethos. There is nothing that really changes the Monster Hunter gameplay, it’s just bringing it to the Wii in a functional manner. The online multiplayer alone looks to be an exercise in what can be done with the Wii in regards to online. With four-player online, local split screen co-op, as well as a promised improvement on the single player front, there is also an obvious attempt to make the game more palatable to soloists.

Will Monster Hunter Tri become a worldwide phenomenon like in Japan, where it is already the best selling third party Wii game in that nation? Probably not. However, it looks like Capcom has taken what already works and made it better. Now they just have to continue educating Western gamers to pay attention and play.