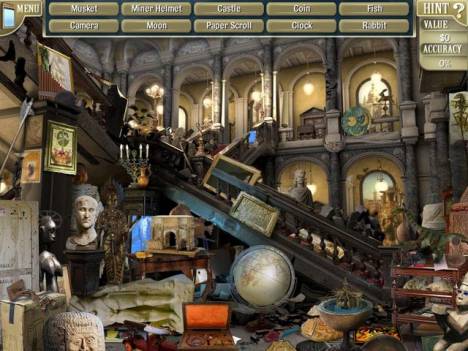 I am not that familiar with Escape the Museum, but once I saw the words “adventure game,” my interest was immediately piqued. Upon further investigation, Escape the Museum appears to be a popular online game that puts you in the role of Susan Anderson as she tries to escape the Natural Museum of History and find her missing daughter after a huge earthquake demolishes half the city.

Looking like a combination of Where’s Waldo and Myst, players are required to find hidden objects in the museum rubble and use them in creative ways to solve puzzles. The Wiimote will be used to examine the environments and uncover secret clues.

Before all you adventure fans get out the confetti, keep in mind this is a port of a very basic game and is skewed more towards the casual crowd — just don’t expect anything on the Zack & Wiki level of genius. If this paves the way for an influx of original point-and-click adventure games on the Wii, though, who am I to complain, right?

Escape the Museum is scheduled to release on the Wii later this year at the bargain price of $19.99.