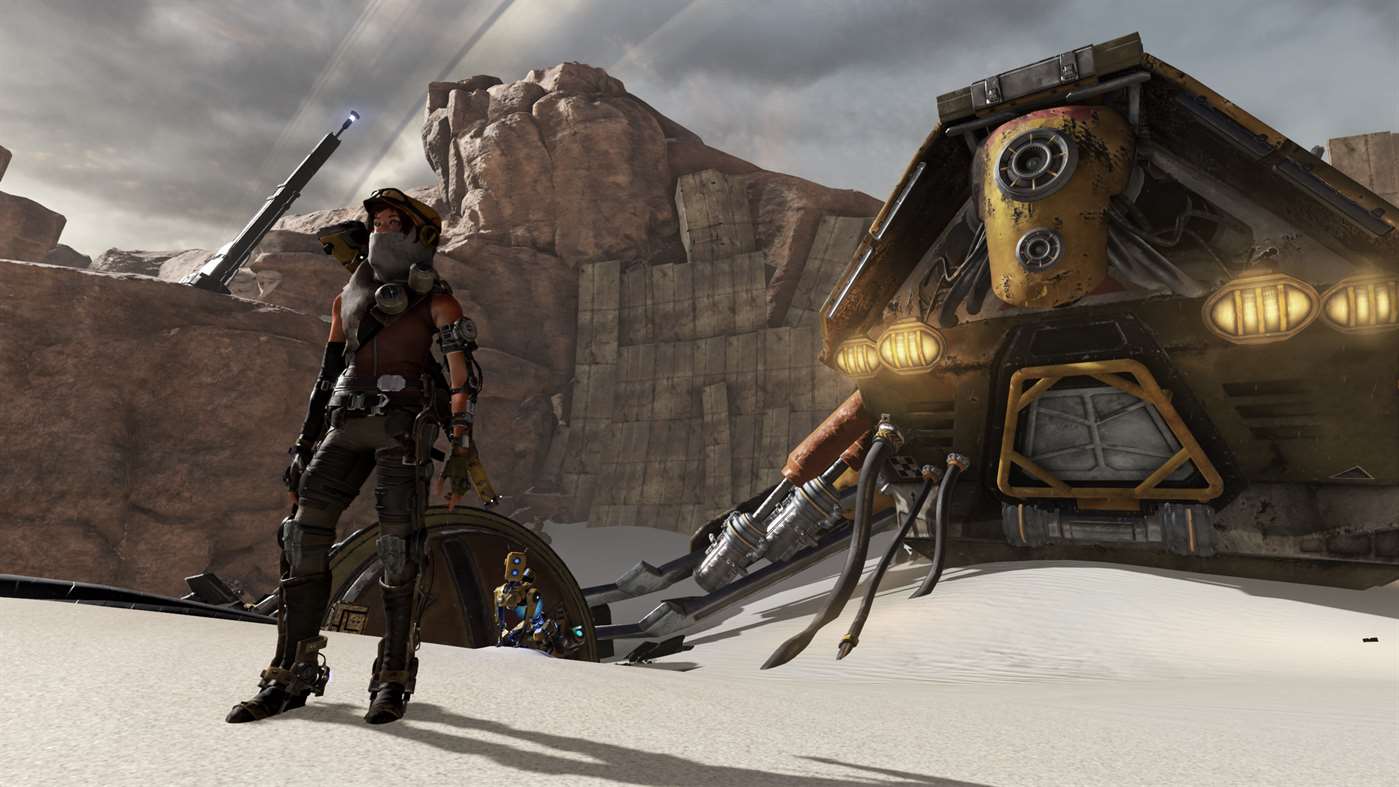 Today, September 13, is the one-year anniversary of ReCore‘s release. In our review, I scored it a 4 out of 10, citing a ton of technical issues and a needlessly drawn-out end-game as factors that overshadowed how good the first two-thirds were. Additionally, it came to light after launch that there was a fifth robot that was hastily pulled from the final version, but traces of it existed everywhere from the in-game menus to pickups that enemies dropped. It was all very weird and smacked of a game that had to ship whether it was finished or not.

One year later (and past the point where most people care), I’m confident in saying that ReCore is finally pretty decent. The inclusion of that fifth robot, the tank, is a fine addition. The tank is used to traverse across quicksand, and it’s enjoyable enough to have an approximation of a vehicle for Joule to ride on. This opens up some race-like mini-sections where the player has to chase a bot over boost pads and ramps. If nothing else, it’s a fine way to get across vast stretches of desert.

Also, the same add-on that introduces the tank also adds the Eye of Obsidian storyline, two sections to the overworld, 10 dungeons, sandstorms which alter the landscape and reveal new dungeons, and three alternate weapon modes for Joule’s gun. This is all substantial in making ReCore a more well-rounded game.

However, it’s not the new things that make ReCore better; it’s the way that developers Comcept and Armature fixed most of the original game’s hangups. And it makes playing now considerably more tolerable.

On the technical side, things are vastly improved. At launch, ReCore would sometimes take more than two minutes to load an area (on Xbox One). A patch was issued relatively soon after release that mitigated this problem from ridiculous to still-pretty-long. Now load times usually seem to be within 10 seconds. Also, dying results in an instantaneous reload from the last checkpoint, and dungeons are able to be restarted at any time. These last two are particularly significant because the most notable penalty for failure wasn’t necessarily lost progress, it was that you had to wait so long to try again. What’s more, and this is just anecdotal from my experience, frame drops seem to be less common and less debilitating.

The technical fixes are important and necessary, no doubt. But if those are 1A, all the quality-of-life improvements are 1B. Most everything that was unnecessarily convoluted or inhibiting has been tweaked. The map is easier to read now and it shows more information. Joule no longer needs to travel all the way back to her crawler from the beginning of the game to make key changes; core-swapping, stash-transferring, and party-changing can now be done from any fast-travel station. This may sound petty, but remember that traveling back to her crawler would require multiple loads, each usually taking more than a minute. Also, the tug-of-war mini-game has a new visual cue so that it’s easier to understand.

Of everything here, it’s probably the elimination of the end-game grind that I’m most relieved about. Now, every floor of the E-Tower requires just 30 Prismatic Cores to access. In the original version, each floor required five more cores, with the final door needing 45. This should vastly improve the pace at which late events play out rather than sending the player out into the overworld five or six additional times.

(However, it’s entirely possible that player level will still artificially gate progress. The late-game enemies are quite difficult and it might necessitate going back out and grinding to level up. I’ve already beaten the game and I’m not starting over to find out.)

I’ve paid more attention to ReCore over the past year than I ever imagined I would. It’s mostly due to the bafflingly incomplete state it released in mixed with the “big news is right around the corner!” messaging that the developers and Microsoft kept throwing at consumers. The situation has been awkward for almost a full year. The creators asked for a showing of faith from people who already bought the game, even though those people had no real reason to show any faith.

Maybe it’s too late, but the ReCore Definitive Edition makes good on what ReCore should’ve been in the first place. The add-on is free for existing owners; new players can buy the Definitive Edition for $20. I think ReCore has finally gotten to the point where I feel comfortable recommending it.