Save your now-tired complaints about the over-saturation of undead flesh eaters in videogames: Dead Island is definitely a game to keep an eye on.

I’ve come to this conclusion after exploring a one-hour timed Xbox 360 preview build of the game… and then immediately turning around and spending one more hour to see what I had missed. Then I did it again. And when I’m done writing this, I may very well head back in for some more. 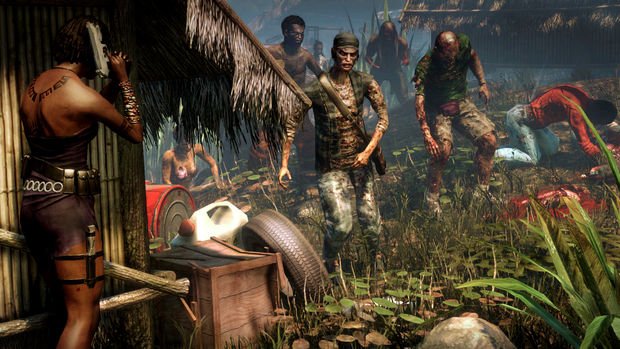 As a long-time fan of basically anything involving zombies, Dead Island is a pretty easy sell for me. It’s Left 4 Dead and Borderlands in equal parts, set on a beautiful resort island swarming with infected ghouls. If that doesn’t do it for you, how about this scenario…

I’m armed with two weapons: a hunting knife and a large, wooden paddle. With the knife in my hand, I’m backing away from an approaching zombie, attempting to keep my distance. I pull the left trigger on the Xbox 360 controller and take aim with the blade. I toss it into the shambling creep from several feet away, the pointy end digging deep into its chest. Quickly swapping to the wooden paddle, I dash towards the zombie and shatter its skull into chunks. As it falls backwards, finally and truly lifeless, I reach out and quickly retrieve the blade before the monster hits the ground. All of this, in only a matter of a few seconds. Dead Island, it seems, promises to be full of these “Holy crap, that just happened” moments.

While I made comparisons to Left 4 Dead and Borderlands, that’s only partially accurate. Certainly, the game’s four-player cooperative zombie killing reminds me immediately of Valve’s stellar shooter. And like Borderlands, Dead Island is as much about quest completion and leveling up as it is about finding loot scattered all over the game’s fictional Palm’s Resort. But unlike both games, it’s not fair to call Dead Island a shooter, because in my first hour there was nary a firearm to be picked up.

Instead, Dead Island is more about finding whatever you can — knives, wooden planks, the aforementioned paddle — and cracking it upside the heads of the undead. It gives the game a different feel, forcing you to get up close and personal with your attackers. It’s a visceral experience, with well-placed hits capable of crippling a zombie or even completely obliterating their rotting faces. 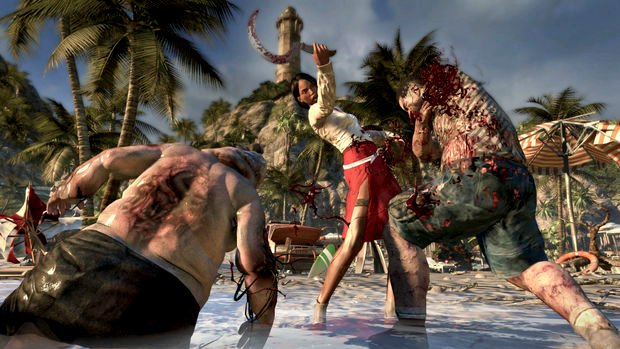 Whereas Left 4 Dead features seemingly endless hordes of zombies, within the first hour developer Techland shows some restraint. It didn’t take the undead brush and liberally paint them in every nook and cranny of the island. In one area, I walked along a quiet, seemingly empty beach. Suddenly, off in the distance I hear screams. And moans. And grunts. And gurgling. The dead, they’re somewhere… and suddenly, one is upon me. A quicktime event (the left trigger, followed quickly by the right) knocks them back, and I regain my composure before delivering a few brutal, crushing blows.

Dead Island also made me feel a bit like a kleptomaniac. The game begins with you waking up alone inside of a hotel room. As you step out into the empty halls, you find luggage and other objects strewn all over the place. You just pick through them, finding money and other random items that you can later sell or combine with objects to create weapons. With only an hour to play my preview build, I still couldn’t help myself from picking through everything I found: trash, guest bags, corpses, the trunk of an abandoned car.

From the game’s start, you can choose from one of four characters: Logan, ex-quarterback and master at throwing stuff; Purna, a foul-mouthed female bodyguard who’s a crackshot with a firearm; Xian, the Asian sharp weapons expert; and Sam B, king of the blunt weapons and internationally known hip-hop star. If there’s one negative thing I’m ready to level at Dead Island before its release, it’s about this collection of stereotypical nincompoops. (Yes, I said “nincompoops.”) Long story short, every one is annoying in a different way, and will incessantly say stupid shit while you try to get down to zombie-killing business. 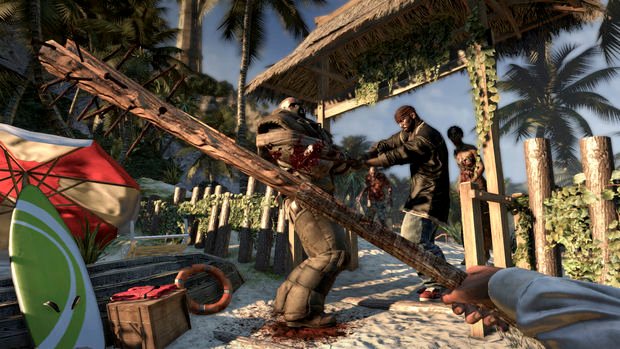 Fortunately, I was able to look past that, and focus on the gameplay abilities that will make each character unique. For example, Purna is more effective with guns, and her unique XP-based character progression and skill tree reflects that. Remember how I said I didn’t find a single gun in my travels? That’s true, but Purna keeps one at her side; it’s part of one of her “Rage” attack abilities. By simply smashing dead things to bits, you’ll build up your “Rage” meter. Once full, a single button press let me pull out a small handgun and bust caps in zombies for a limited amount of time.

Given I’ve only played through a single hour of the game (several times, mind you), it’s hard to get a sense for how Dead Island‘s story will play out. The plot appears to be “zombie outbreak, resort island, we gotta get off this rock.” Whether Techland can even come close to striking the same emotional chords of that now-infamous initial trailer is questionable. Even so, there are hints in the first 60 minutes: at one point, I find a man sitting in a swimming pool tainted red with blood, sobbing over the lifeless body of his girlfriend. He’s completely shook, rambling and in tears as he recounts how he had to put his infected girlfriend down at his own hands.

But hey, even if Dead Island is simply a violent romp around a tropical island that has me killing zombies for 20 or more hours… I think I’m cool with that, too.