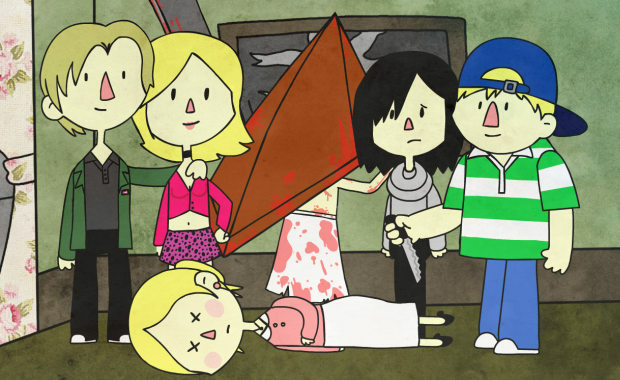 It’s the first Monday of December! Hopefully, you know what that means. If not, I guess I’ll tell you: it’s time for another episode of Once Upon a Pixel, the webseries that explores an alternate universe where videogames do not exist.

But that doesn’t mean their stories, characters and situations are never created and used. So far, we’ve seen what Metal Gear Solid and Bioshock would be like if they were children’s stories, and what Katamari Damacy would be like as a graphic novel. Now it’s time to see what Silent Hill 2 would be like if its story was used for a typical late 80s/early 90s sitcom, with bad jokes, canned laughter and all.

No still pictures here; this episode actually has animation! This is the first “cartoon” I’ve ever completed, in fact. Even though the minimalistic motions may not speak for it, this episode was a lot of hard work and I’m pretty happy with how it turned out. And even better, it makes both myself and Mr. Burch crack up laughing. I hope you all find it worth a laugh as well.

You can catch Silent Hill over at Gametrailers. If you like it, Digg it, and as always, be on the lookout for some behind-the-scenes stuff here on Destructoid soon!

Filed under... #Once Upon a Pixel#Silent Hill