It’s about 9:30 AM on a Thursday, it’s an unheard-of-for-Los-Angeles 55 degrees out made worse by intense winds, and I’m ready to see the Nintendo Switch for the second time, days before the console launches. The Switch is ostensibly the reason for my visit, but everyone knows that’s only a formality. I don’t know that I need to see that Zelda E3 demo for a record-breaking third time. But if I’m not here for video games, why would I trust people that I’ve never met to drop me in the middle of nowhere?

I chose to put my life in the hands of some Nintendo employees because I heard this media event would feature the John Cena, not unreasonably far from Los Angeles. When you hear about an event where John Cena will be playing some video games, you do whatever it takes to get there. In my case, “whatever it takes” boiled down to “email the PR people and borrow my roommate’s car.” I needed the car because this wasn’t just a regular preview event that also happened to feature John Cena, otherwise I would just take an Uber or something. I had to drive up to Santa Clarita — which is in the middle of nowhere — and take a shuttle from the eerie Blue Cloud Movie Ranch to a shack Nintendo constructed in the middle of the desert. Supposedly, this is meant to play off the idea that you can play the Nintendo Switch anywhere you go, but that’s real easy for you to say when you can build a fake living room with power and heat in the middle of nowhere.

After spending five minutes in Santa Clarita, I understood why someone would set a horror TV show in this suburb. Being there felt like I was actually in the uncanny valley. Its rolling hills are plastered in rows upon rows upon rows of nigh-identical McMansions, like a neighborhood occupied exclusively by a hive-mind. There’s a Westfield mall. There’s a Chick-Fil-A. Don’t go to Santa Clarita, even if you think seeing the empty sets at the Blue Cloud would be worth the trip. I should have turned around and left as soon as possible, but the allure of Cena was too great. I had to see the man who cannot be seen. 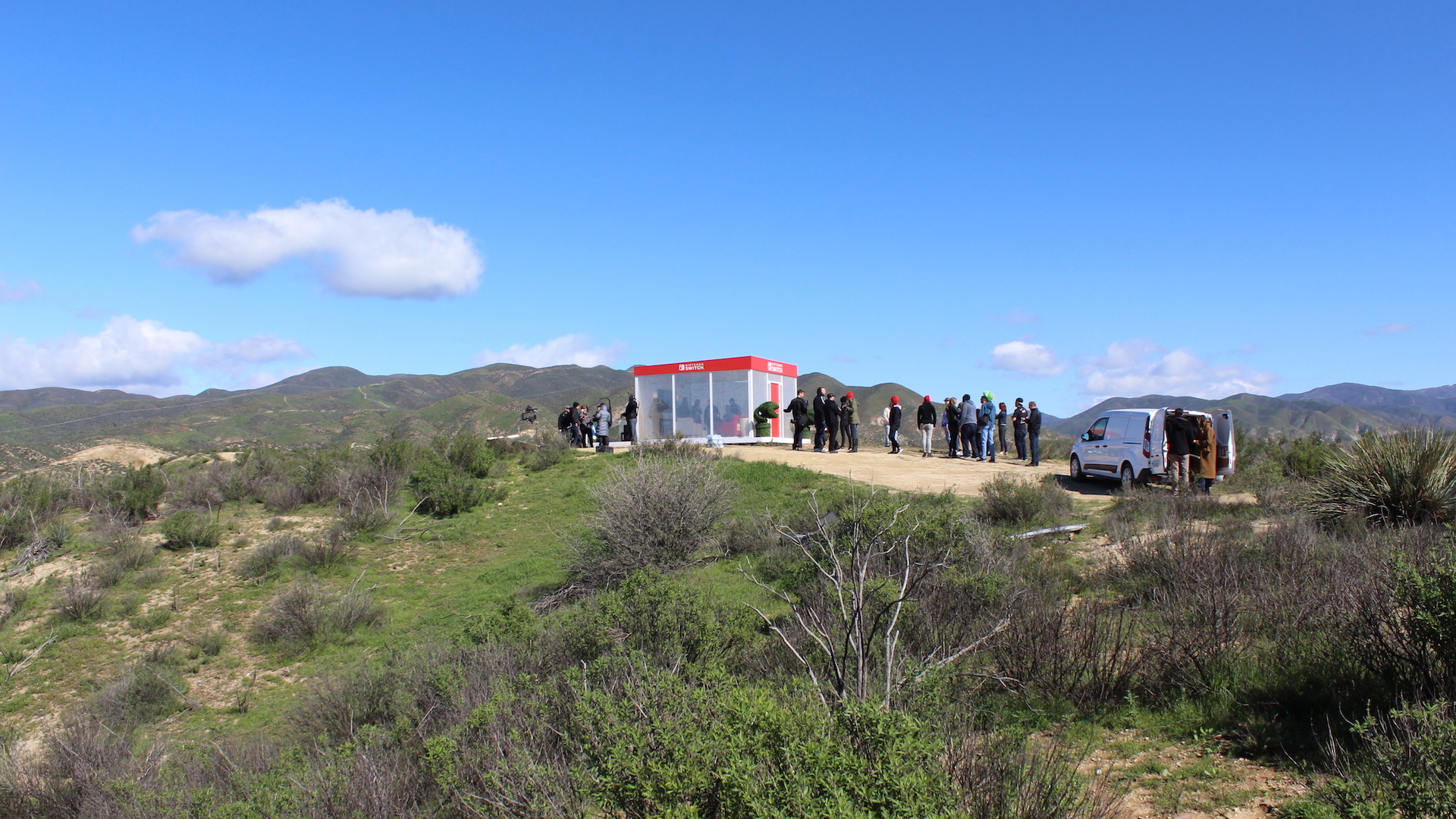 Going from a large plot of abandoned movie sets to a fake living room adds a kind of theme to this preview event, one you don’t normally see from your average E3 demo. The whole situation reeks of artifice, as the shuttle carries you from a series of buildings constructed only for elaborate make-believe to a single building constructed for slightly less elaborate make-believe. Same idea, less money. If that wasn’t enough, the “entertainment news show” Extra was also on-site, getting ready to shoot an interview with John Cena. Eventually, it got to the point where I couldn’t tell if I was being ordered around by Nintendo people or Extra people. Either way, somebody physically moved me from one side of the Switch Shack to the other, and that’s why most of my photos are of Cena’s back.

It was incredibly warm inside the Switch Shack, as the heater did its best to compensate for the gusts outside. This is why you wear antiperspirant everywhere you go, because sometimes you might be in a hot artificial living room watching some people you don’t know play Zelda. As my group — me and four of the folks at Random Encounters — entered the Switch Shack, we shook hands with the man himself. Let me be the latest to tell you: John Cena is an enormous slab of beef. His voice is even deeper in person. His smile twinkles and dances like a friendly demon. The man is everything you want him to be — personable, handsome, energetic — and more. Unless you’re a smark, and you want him to be a heel, then you’re out of luck. (Note to my editors: I refuse to change that sentence)

Since we were still in the “media and influencers” appointment block, we had time to get some work done. The Random Encounters group had a video idea: one of the staffers had lost a bet and thus had to challenge John Cena to a “fight” as punishment. The joke being that, since it was clear that nobody in the tent would be a match for the 16x WWE Champion, taking it the virtual world was the only way to level the playing field. Joke’s on us — he destroyed everyone in the 1-2-Switch minigame Quick Draw, including me. I even did a quick Daniel Bryan Yes! chant, hoping it would give me some kind of power or aura. It wasn’t even close; I knew even before the results screen that the Face that Runs the Place had won again. As John Cena left the shack for his Extra interview, he gave me a small “Yes!” right back. “I’ll tell our GM (Daniel Bryan) you said hi,” he said. 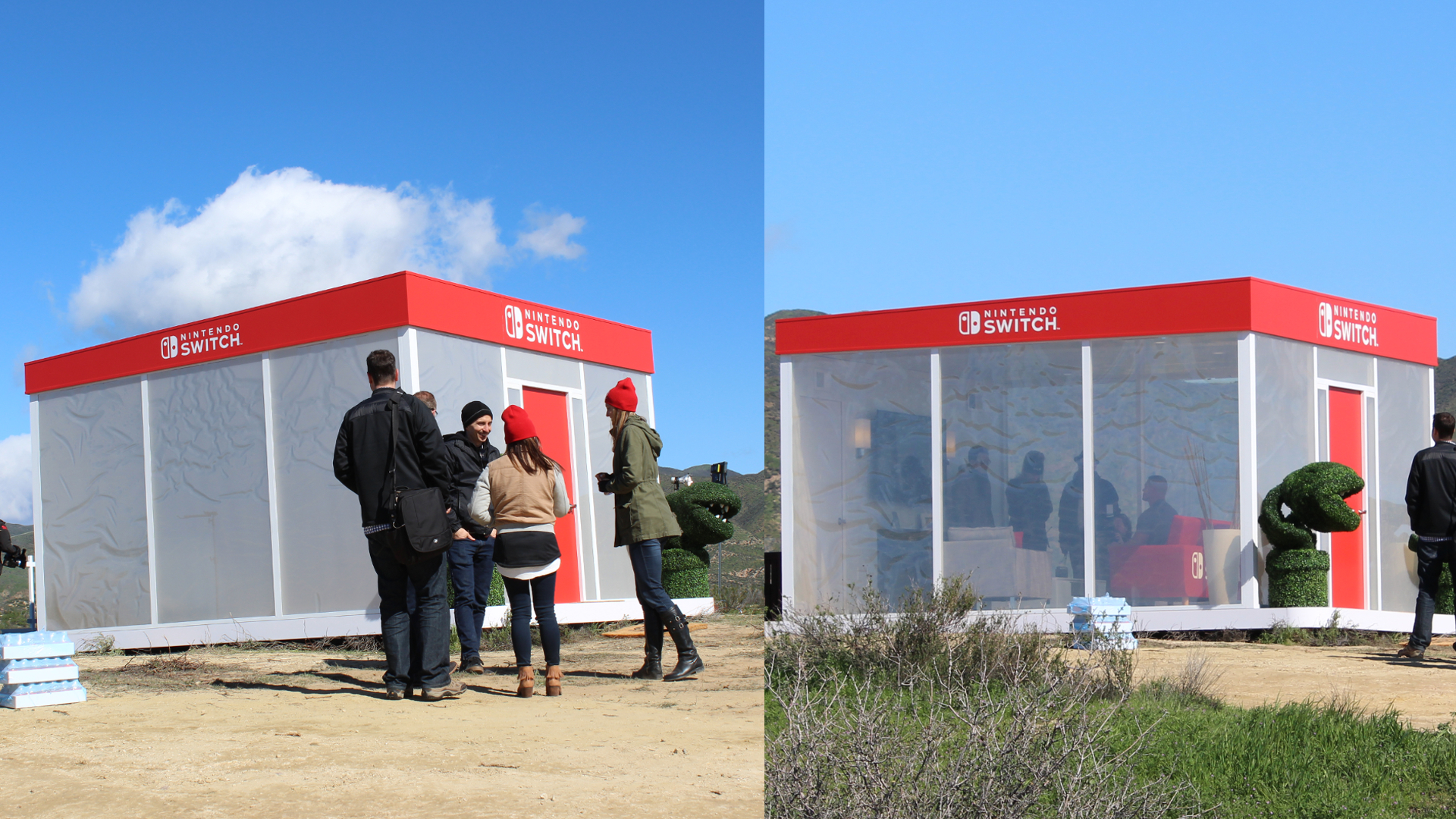 And with that, we were alone once more, in a small room far away from any conceivable emergency service or Burger King restaurant. Fun fact about the Switch Shack — when you dock the system, the windows tint. When you remove the tablet from its dock, the windows go clear. This is not a joke. During the Zelda demo, the Random Encounters team hit the point where our PR rep, Dimitrius, was supposed to tell the person playing the demo to remove the tablet from the dock. Except for the fact that Extra was shooting with John Cena outside, and the sudden change in the window would have ruined their shot. Apparently, the window tinting system was entirely out of Nintendo’s control. It had gone rogue. I got my last couple photos, took in the scenery one more time, and spent the rest of the day hitting up Wal-Marts looking for action figures. I didn’t find anything good.

In about one week, the new Nintendo system will be in the hands of regular consumers and incredibly charming Destructoid reporters. People who missed Amazon pre-orders will line up outside GameStops and Best Buys in the hopes of getting their hands on the Nintendo Switch. We don’t know who they are at press time, but they desperately want to purchase the console that will define the future of Nintendo, the most iconic video game company on the planet.

When I talk about the Switch defining the future of Nintendo, I’m not talking about failure. I’m talking about success. If the Switch hits, maybe respectable but not amazing Xbox One numbers, what does Nintendo take away from that? The Switch has a weird, kind of exciting hook. Would the Switch 2 just be another Switch with more RAM — the first full Nintendo console since the GameCube to be a more powerful iteration on a previous idea?

I get that I’m not really seeing the forest or the trees — right now, I’m focusing on trees that haven’t even been planted yet. But when you consider the unusually sparse launch lineup, the “beta” online functionality, and the widespread Joy-Con de-syncing issue, the Switch feels like a console that was pushed out the door. You don’t rush a console unless you needed that thing in stores yesterday.

Look, I’ve already said my piece on the Nintendo Switch; I’ll buy one, but I’m more excited by a new gadget than I am this gadget in particular. But I’ll tell you one thing: John Cena seems really excited.