You’ve read Conrad’s preview, seen gameplay footage, and considered Maurice’s analysis. You’ve looked at screenshots, heard arguments both for and against, and perhaps even pronounced your own. You’ve found out that it’s coming next February, a rather short time for a game that existed as little more than a rumor for so long. Point is, EA is trying to bring back Bullfrog’s old classic Syndicate in a big way, and it’s making all the usual promises to “keep true” to the original game’s legacy.

Me? I assert that Syndicate‘s true legacy, its essence, the quality that raised it to its pedestal, the greatest challenge to any game that would “keep true”, is evil. Above and beyond all other things, Syndicate is about being evil. 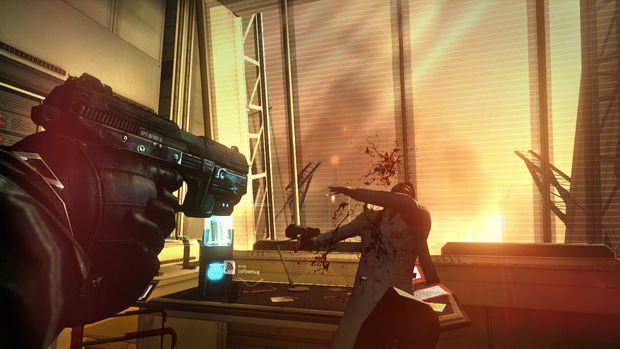 (For convenience’s sake, let’s refer to the new reboot as New Syndicate.)

Before you dismiss this little piece as yet another anti-New Syndicate rant from a grumpy PC gamer who can’t accept change, allow me to say this: Syndicate kind of sucks.

A clarification: it’s not as if Syndicate was a bad game. In fact, it was pretty great. Notice that I’m using the past tense here. Syndicate sucks in that it isn’t nearly as “timeless” as some would have you believe. Eighteen years haven’t been as kind to Syndicate as to, say, the original X-COM. Syndicate simply hasn’t aged well, and in its original form, it offers few lessons to the school of contemporary game design.

There are lessons to be learned from it, of course. It’s just that Syndicate‘s lessons, the most important ones, aren’t rooted in camera angles, genre conventions, control schemes and platforms. 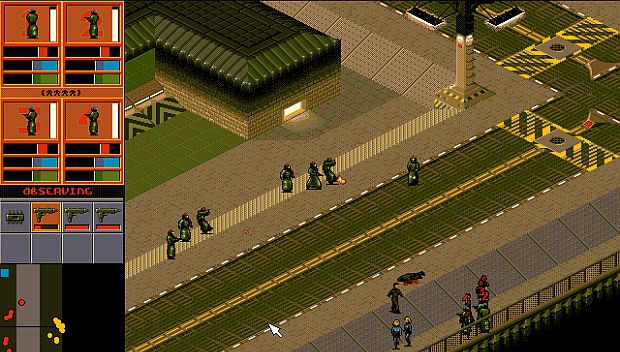 Into details for a moment. Syndicate was a real-time, isometric-angle strategy game. You, as an executive at the mega-conglomerate Eurocorp, clicked on little cybernetic agents to make them go places and kill things. Occasionally you’d click on little gauges to regulate doses of various drugs, ones that corresponded to setting your agents’ AI behavior. Dope them up on one drug and they’d get paranoid, killing anything in sight. Pump them full of another drug, and they’d walk a little bit faster. Between missions you’d spend money to upgrade your agents, making them more adept at killing things without being killed themselves.

And that was pretty much it. There’s little in Syndicate‘s mechanical repertoire that isn’t already accounted for, iterated upon, or incorporated into the games of today. Modern games don’t need to use such crude methods to manage AI behavior. Modern games use upgrade systems, often with more complex effects and allowing more tactical freedom than anything Syndicate offered eighteen years ago.

If Syndicate represented the gold standard for classic gaming, the argument that today’s titles are “dumbed down” would be weak indeed.

Oh, and the cars were shaped like eggs. That was cool. 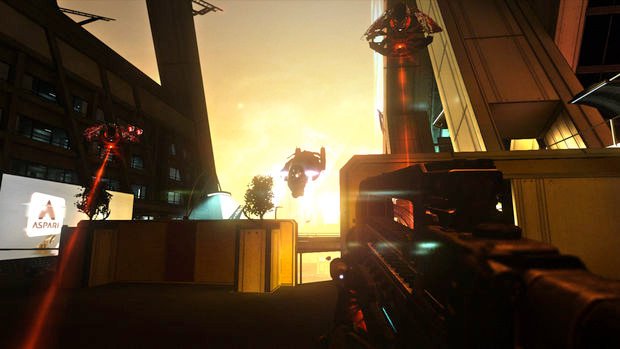 Now that I’ve trashed the original game thoroughly, let’s talk about what Syndicate does have, the lessons it can impart upon game designs of the present, and the aspects that New Syndicate must keep in mind if it is to stay true to that legacy. If Syndicate‘s legacy is not related to its mechanics, what is it related to?

As I said up above, where Syndicate is timeless, classic, and perhaps even unequaled, is in its evil.

Good and Evil, Black and White, Paragon and Renegade, Law and Chaos, Dark Side and Light Side, the various names for judging a player’s behavior are an intoxicating feature for any game aspiring to hold meaning.

However, one might argue that one of the true draw of incorporating moral choice isn’t the choice itself but the fact that an evil option is present at all. So many games (as well as real life) demand that people behave nicely that the ability (or mandate) to be naughty is a tempting, memorable proposition.

That would help explain the success of titles like Dungeon Keeper, Overlord, Evil Genius, and, of course, Syndicate. Those games make you play the villain, and they’re fun because you usually can’t be the villain.

That said, the difference between the first three games and the fourth, though, is in their approach to making players act villainous. The likes of Dungeon Keeper and Overlord present the player with cartoonish parodies, the kind of mustache-twirling shenanigans that would make Dick Dastardly and Cobra Commander proud. In a word, the former games concentrate more on being “naughty” than being “evil”. 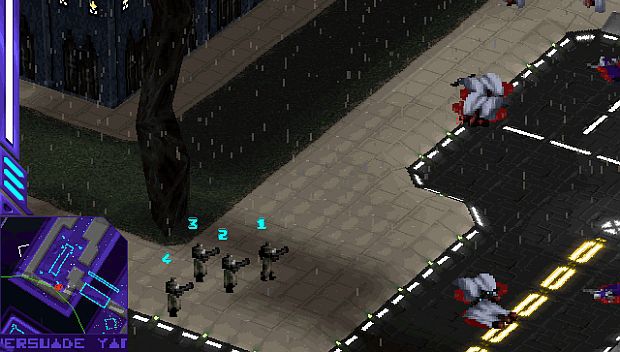 Syndicate, on the other hand, trades in a more subtle and nuanced variety of evil, one much closer to the sort people in the real world are all too used to seeing or hearing about on the news. It is the kind that, if handled poorly, can spark outrage or open disgust. At the same time, though, Syndicate‘s brand of evil, if handled effectively, can disturb, provoke, and entertain in a way that kicking puppies and being naughty cannot.

To use an analogy, if Dungeon Keeper and Overlord club seals because they hate cute, fuzzy things, Syndicate clubs seals because their fur trades well on the open market. Syndicate would also go and kill the witnesses to avoid having to go through a class-action suit from the seal rights lobby.

Being a game called Syndicate, we’re dealing with corporate evil, the stuff of news exposes, conspiracy theories, and indictments of the military-industrial complex. This position puts it in that weird gray area of morality, the kind we encounter in everyday life, or see on the news, where evil is characterized not by malice and spite but by nihilism, greed, and callousness. Being unethical can be even scarier than being hateful, when represented correctly.

While global corporate domination is hardly a new concept to fiction, Syndicate from other games in that the player is the instigator of the evil rather than the agent.

As an executive of the evil corporation, you are the boss rather than the henchman. It’s evil on an organizational level. Rather than being a simple cog in the machine, carrying out orders, Syndicate puts all that responsibility in your hands. The wanton violence and calculated brutality typical of a Syndicate mission is your job, and you know it. There’s no hiding from responsibility when you’re the one calling the shots.

Hell, Syndicate‘s intro cinematic shows a man being run over by a car deliberately, as part of the process of being “recruited” into the ranks of the company’s agents. The idea that you might have given the order can be, well, delicious in a way that simply killing do-gooders because they do good cannot. 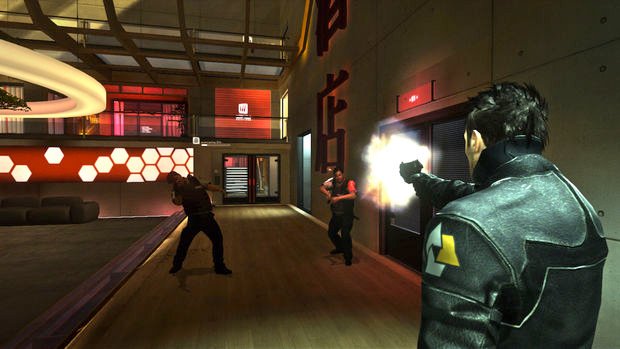 And that’s where the biggest challenge lies for New Syndicate. Everything we’ve seen of the game to date shows you, the player, to be the cog in the machine, rather than the man in charge. After all, you play one of the cyborg, chipped-up agents that in the original would be seen from above, directed by mouse clicks rather than analog sticks.

That reduction in scope runs in the face of classic Syndicate‘s be-the-boss branding. Being an agent rather than an executive absolves you of responsibility. “I had to do it or I would be fired,” would be your excuse, and it’s quite a valid one in a world where being fired means being reduced to your component parts and having your organs harvested for sale to the highest bidder. Probably.

But as in any business, risk brings opportunity. Starbreeze still has a chance to infuse New Syndicate with old Syndicate‘s soul, without going isometric. The key, I believe would be to make players both acknowledge and relish their roles as cogs in the machine of corporate domination. 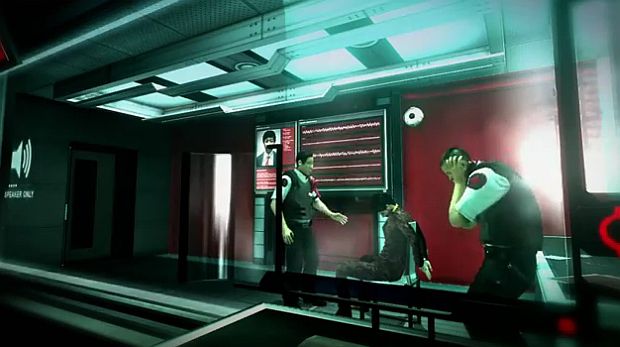 Today’s games, particularly modern shooters, are criticized for being little more than on-rails rollercoasters, simply shuttling players from scripted set-piece to scripted set-piece. It’s gotten kind of ridiculous, in some instances. Players feel like they’re being given no choice, no motivation, and no freedom of will.

Well, in Syndicate, that’s kind of the point. Agents don’t get to have a mind of their own. They do the bidding of the suits. They’re supposed to be regarded as little more than investments, more numbers on a spreadsheet than people. If there was ever a game which excused having a silent protagonist with no personality, it would be this one.

If played right, Starbreeze can use that freedom from having to take responsibility can convey the same sense of disturbing callousness and nihilism, taking it out of the player’s hands, but leaving that joy of catharsis and indulging one’s inner sociopath, without the guilt-ridden aftertaste. 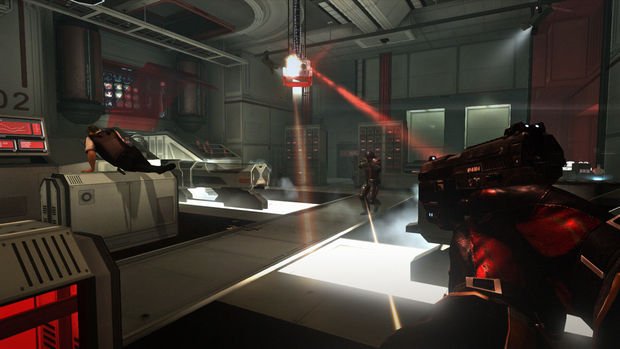 Take, for example, Modern Warfare 2‘s infamous “No Russian” mission. In that game, it felt like an unnecessary, gross sequence placed in the game for little reason other than shock value, an excuse to add in that “edgy” disturbing-content warning. That sort of mission was, in classic Syndicate, a typical day at the office. Gathering crowds of innocents using the Persuadertron and then shooting through them as they served as human shields was a valid tactic. In Syndicate, there is no need to justify a “No Russian”-esque atrocity as some kind of stupid deep-cover operation “for the greater good.” You’re just doing your job. Business, right?

Syndicate‘s legacy is one of uncaring disregard for the things society deems valuable. Turning violence into a force for profit rather than justice is par for the course in the world of executives and their pet agents. To stay true to that legacy, Starbreeze needs to muster the will to follow through on that vision, and allow players to appreciate just how ruthless that kind of world is.

Better still, they should be able to enjoy their being part of that world. It’s a hefty challenge, but one that was surmounted by a little strategy game from Bullfrog some eighteen years ago. Starbreeze need only step up and do it again.