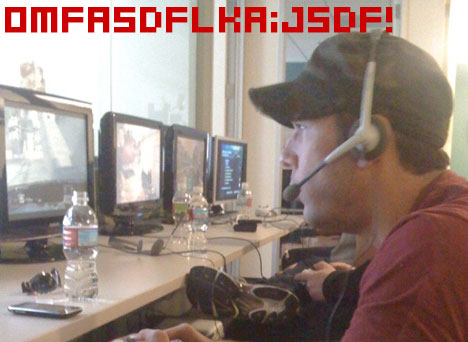 It’s no secret that Infinity Ward is working on a new game that apparently is being called Call of Duty: Modern Warfare 2. Not particularly clever, but it’ll get the job done, I suppose.

By “job done” I mean get us all worked up, because Call of Duty 4: Modern Warfare was the s**t, son. So when Infinity Ward community manager Robert Bowling posts pictures on his Twitter of comedian/actor Dane Cook playing what is apparently Modern Warfare 2, I get a little angry. To get it out of the way: yes, if you squint really hard you can make out Modern Warfare 2. And if you hit a few tabs of acid, it totally looks high definition. Also, you play the game with a controller, confirmed.

Cook later posted some of his own Tweets about the experience, in what appears to be the first Modern Warfare 2 review.

He later confirms that the graphics are “improved,” and that it “feels like [Call of Duty 4] but on steroids.

But back on point here — SERIOUSLY. DANE COOK, INFINITY WARD!?!? WTF!?!? I don’t know the guy, so I have no reason to hate or dislike him. But now I do. Dane Cook is now my nemesis, and I will do whatever I can to ruin him. Hey Dane — your jeans are ripped! Jerk.

Filed under... #Call of Duty#Hollywood#Infinity Ward