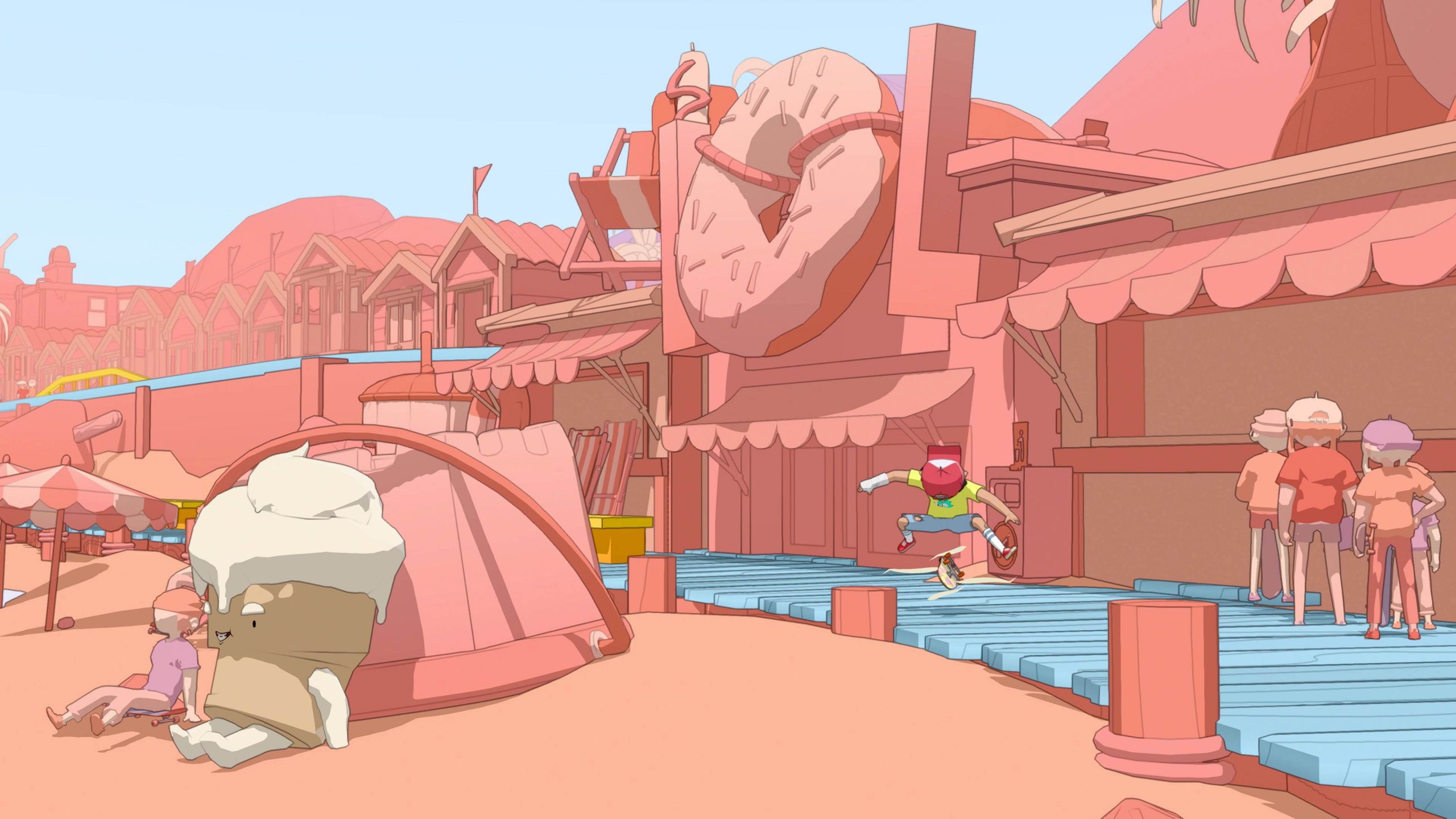 OlliOlli World is a new approach, but the skateboarding still owns

There was a moment while I was playing OlliOlli World‘s demo where I stopped thinking about how to ollie. That didn’t mean I forgot; it was just that I was so locked into everything else, the ollie was becoming reflexive and mechanical, simple as turning left or right. And then the game asked me to beat the level without using it once.

It’s an optional challenge, but one that made me shift a little bit more and get out of my comfort zone. As I progressed forward I was using the ollie less, even if I wasn’t challenged to avoid it. A little gentle encouragement from my skate crew to try something new was all I needed, and that’s why I’m really digging the new look for the OlliOlli series in OlliOlli World.

The first two OlliOlli games were solid skateboarding games, but pretty straightforward. Your character would go on a journey across various areas, completing challenges and skating around a fictionalized world that mostly resembled modern day. Not to say it didn’t have character, but it definitely didn’t have it in the way OlliOlli World does.

OlliOlli World is set in a fantasy land of Radlandia, where talking amphibians and giant bees holding up billboards are business-as-usual. It’s a place that would fit right in on the Cartoon Network, but that distinct look helps everything feel a bit warmer—which is really nice when you start bailing on repeat attempts at certain gaps or challenges.

Accompanying your protagonist is a skate crew, made up of several very different skaters. Chiffon, a skate wizard, acts as the in-game reason for respawning and restarting, and a big friendly guy named Gnarly Mike is the one who issues you challenges. Suze tapes it all on her video camera, and “Dad” is the dad of the group, leading all of you on your skate-tastic adventure. It’s a charming, fun group of skaters that represents the heart of what OlliOlli World and the dev team at Roll7 seems to want you to do: skate. 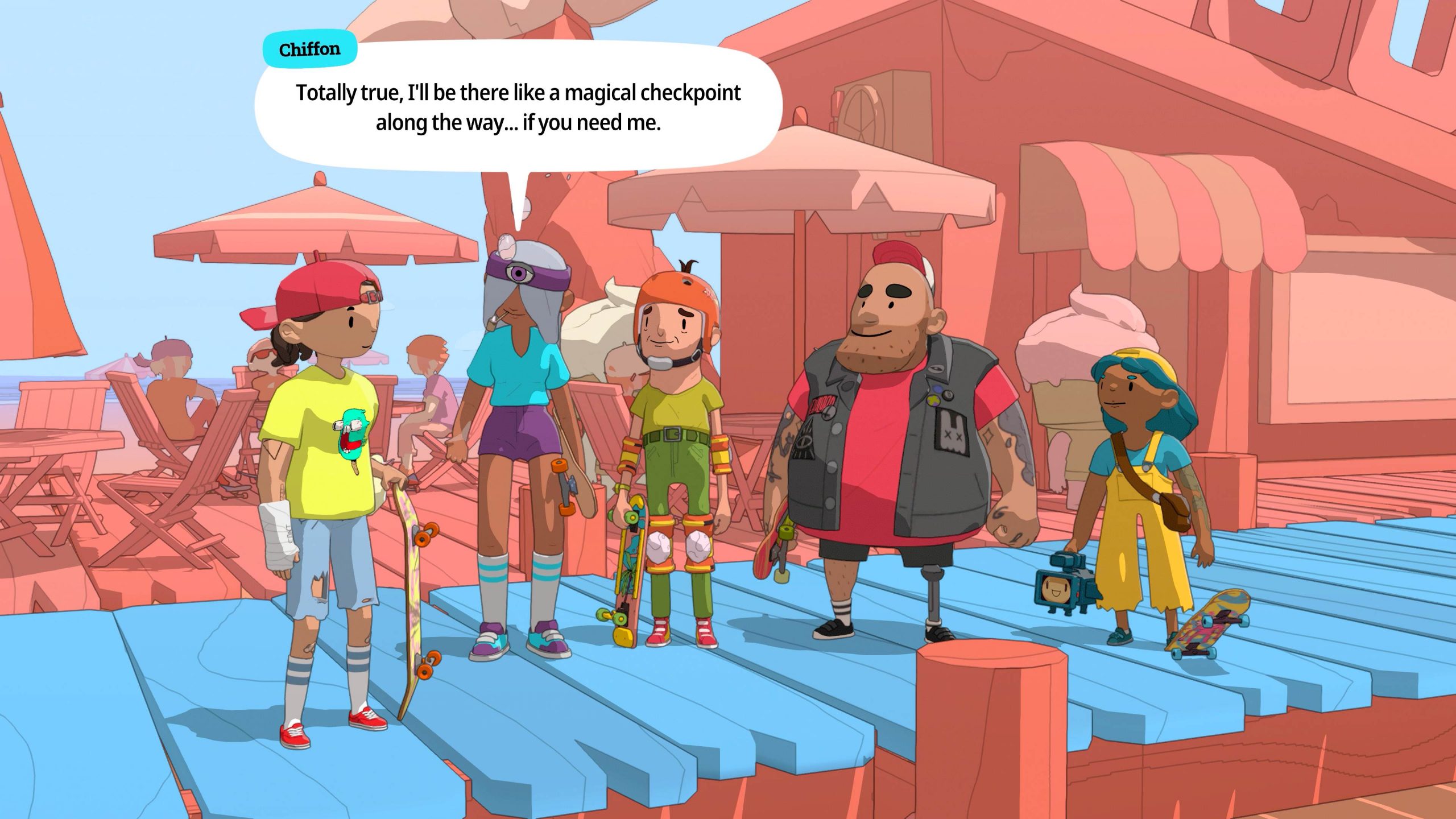 In an interview with Roll7 Co-CEO Simon Bennett and OlliOlli World creative director John Ribbins, they tell me they want OlliOlli World to be a more welcoming game. They looked at old reviews of the previous OlliOlli games to see what could or should change; as Ribbins puts it, the OlliOlli games are great, but “a bit cold.”

Step one is putting faces behind the high scores. Now you’re not just beating an arbitrary, developer-set high score, but Dad’s high score. You’re completing challenges for Gnarly Mike, and he congratulates you when you overcome them. Challenges are often times optional too, with an emphasis on experiencing the world and playing through it to discover things, even if you’re not nailing massive combos on your first run.

And dang, there is a lot to explore. OlliOlli World adds a lot of depth to its levels thanks to a few different changes, the largest of which is switching lanes. Your skater can cross-over lanes when they line up, and those paths will diverge, creating snaking, branching paths within different areas. Some might lead to certain sidequests, while others might offer interesting combo setups. It’s all about how you want to navigate, and on multiple playthroughs of the same early levels, I was still finding plenty of new and interesting ways to traverse Radlandia. 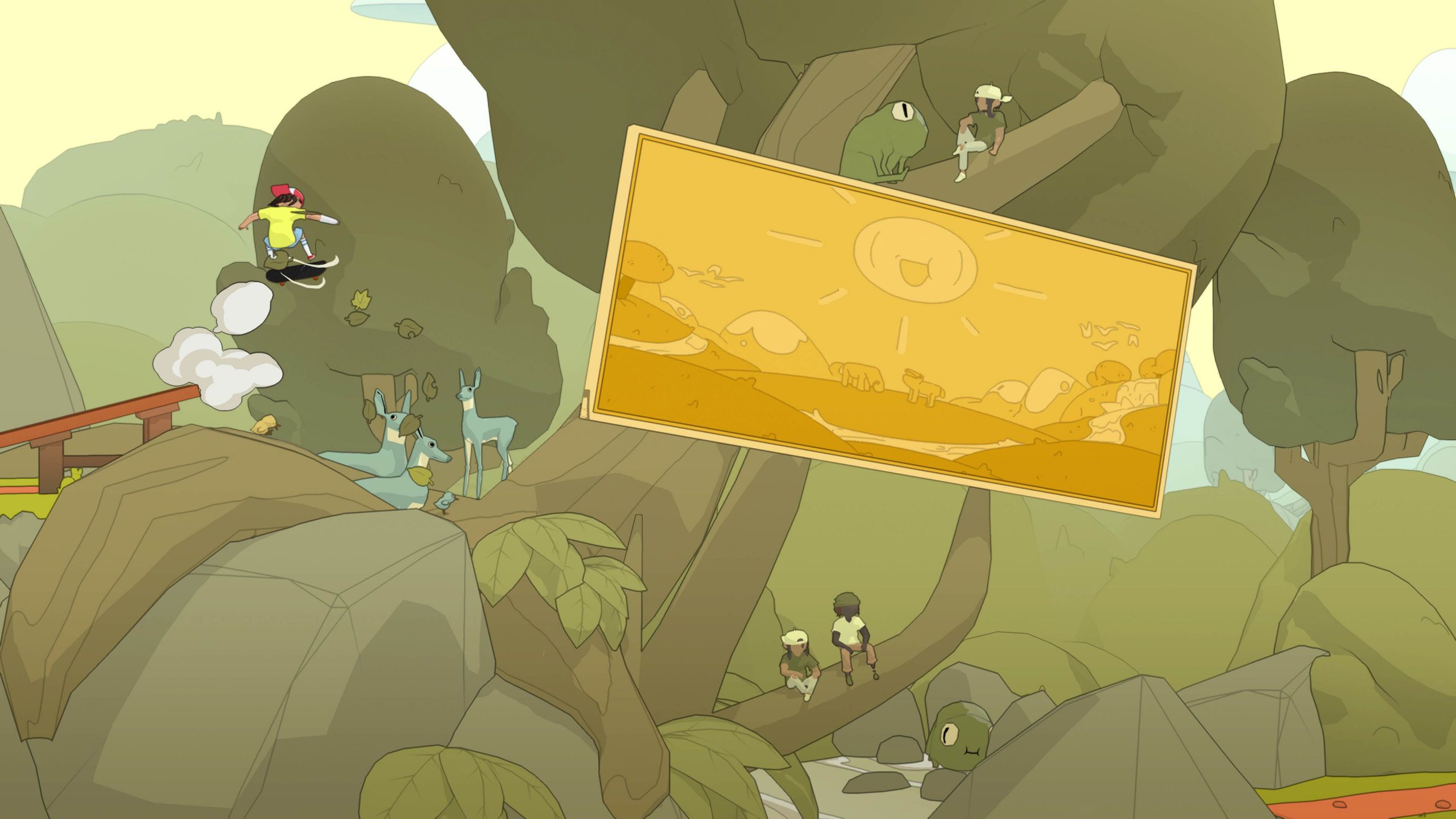 Combine that with techniques like wallriding and a host of new skateboard abilities, and OlliOlli World feels much, much larger than the original straightforward OlliOlli games. It’s still a ride from A to B, but the journey in between is so much more interesting to toy around with, finding new ways of chaining together different segments.

The “flow state” ideal is still at the core, but OlliOlli World presents a new, different kind of challenge. It wants you to explore the world, to learn at your own pace, and to have a cast of characters that nudge and encourage you along, as if it’s your very own real-life skate crew.

At the end of our interview, I asked the developers about what hobbies the team had picked up during the pandemic, and it shouldn’t surprise you at all that skateboarding was the answer. But I asked Ribbins to elaborate a bit more, and he described how some of them had been playing a game of “skate golf;” if you’re unfamiliar, the idea is that someone does a trick, and then you set a personal par for how many tries it might take you to replicate it. 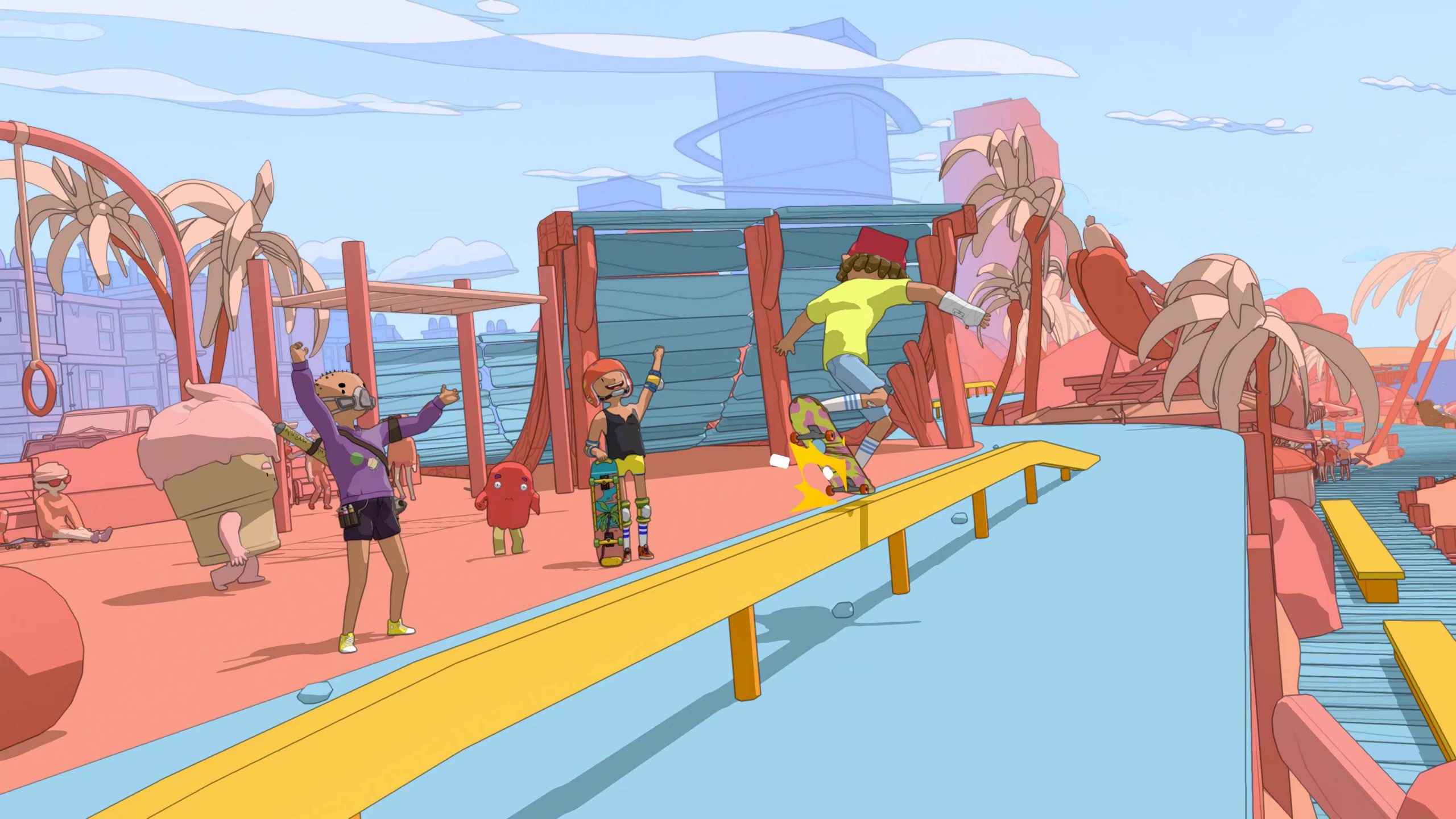 For some new skateboarders, their kickflip might be a par 20, or a par 40. If you’ve been skating for a long time, it might be a par 2 trick. The focus on par meant everyone could participate, though. It wasn’t just about playing “HORSE” or being the best at nailing a trick, but getting your own par down over the course of time.

It’s a small thing, but it felt right in line with what OlliOlli World is trying to accomplish. Through charming visuals, challenges, and lots to explore and discover, this doesn’t just feel like a fresh take on OlliOlli, but a smart way to get a lot of newcomers into a traditionally challenge-based kind of game. It feels really good to finally hit the end of the level, after nailing a big combo chain or finally nabbing all the collectibles, and having your skate crew ready and waiting to congratulate you. Those are the vibes of OlliOlli World, and I can’t wait to hit the ramps and rails for more.