Cardboard boxes, customizable Mother Base, stealing sheep — I am so down

The Metal Gear Solid V: The Phantom Pain E3 trailer was good, but I’m used to good trailers for Metal Gear. It didn’t light a fire in my belly. Ground Zeroes didn’t exactly do so either. The behind-closed-doors Phantom Pain gameplay demonstration? Yes, yes, yes.

Red robot-armed Snake (Big Boss) ventures into an Afghan desert on horseback with Ocelot. The camera took a low angle long enough behind the two riders to appreciate some nice horse butt strut. This is the start of operation aw crap Miller forgot his sunglasses when he was kidnapped, go bring them back to him and rescue him while you’re there I guess.

The introductory cutscene transitions seamlessly to gameplay. Snake’s horse poops a bunch and the demo begins.

I hate horses. I take my dog to a dog beach. It’s a human beach, but dogs are allowed, off leash. Once in a while, rich people take their horses onto the beach. This is dangerous for curious dogs, who could get kicked. Plus, the horses shit as much as 20 dogs. Do those assholes get off their horses and pick it up? No.

Unfortunately, Phantom Pain is 200 times bigger than Ground Zeroes, and walking across barren desert would just not be that fun. Snake did not get off to pick up the poop. Instead, he rode up to an ill-guarded structure and did that cool hanging off the side of the horses lean to tranq a guard undetected, though I’m not sure how he got that close undetected, riding a horse. He held up the other at gunpoint, getting the drop on him, and interrogated him about the contents of the nearby shipping container: raw materials.

Raw materials can be Fulton’d up in the air and sent back to Mother Base to add to your GMP, the in-game currency. You can also find some, like raw diamonds, in the environment. You may be rolling solo, but you’re building an army, and that takes money. Money and troops. Zipping screaming, downed soldiers into the air and back to Mother Base is hilarious. You can also Fulton over vehicles or armaments (like an anti-aircraft weapon). You can even stun some grazing sheep and send them back home. The return of levity is delightful.

There was a whole lot going on in the demo and I loved all of it (except I’m still torn on the already-known slow-mo effect when you’re spotted). The dynamic weather, coupled with the day and night cycle, is a neat addition. Sudden sandstorms obscure your vision, but your enemies’, too. Snake also has a Phantom Cigar, an e-cig with holographic smoke. Taking a drag speeds the passage of time, all in real time, so you can see the weather and time of day changing like a time lapse and wait until you think it’s best to act.

When Snake rolls up on an encampment, a lot of this big-picture openness comes into play. “A huge part of the fun is just looking at the map, ‘how do I get in here? What time of the day would be better? What route should I take?’ That has been missing in my games,” Kojima said through a translator. From up on high, Snake is able to make enemies, mark multiple way points in the camp to plot his route of entry, and keep an eye on guard sleeping and walking patterns.

A lot of stealth games have a disconnect between player ability and character ability. This all helps you feel like a trained saboteur while requiring  you to do some work to earn it. Mother Base helps, too, especially if you have been training recruits (and have the GMP to afford things). You can, for example, order intel on areas. You can also have ammo airdropped in. You can even airdrop a box and konk a guard on the head, knocking them out. At the end of the mission, when Snake was detected, he called in an airstrike from Mother Base and heroically drove away in a jeep, explosions behind. 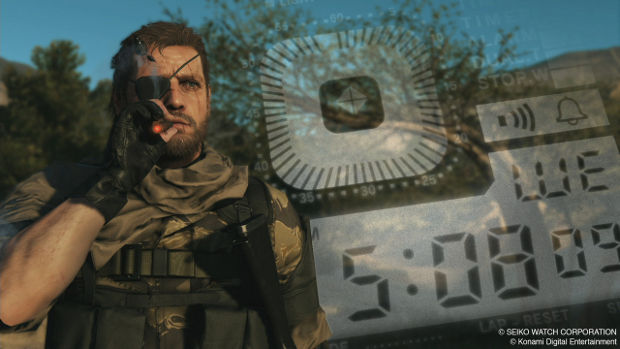 A little earlier, Snake went into his R&D department and had the ultimate of stealth technology dropped in: a cardboard box. And it’s hilarious that it just lands, empty, and Snake just gets in the top.

It’s no ordinary cardboard box, though. First, you can now pop out of the top like a stripper in a cake and shoot enemies or what have you, so you don’t have to equip and unequip. You can also still use the Fulton recovery system from inside. You can also propel yourself out the front of the box (I have no idea how the box manages more than two openings), which could be useful if you’re in just the right position — nearing a wall, for example — to get out without the enemy seeing you. You can even get them suspicious of the moving the box, rocket sneak out, and use it as a decoy.

Its these sort of little touches (also the kind voice that reminds you to vacate your airstrike zone) and unique design that make Metal Gear for me. Even something as simple as being able roll onto your back while crawling (and still inch backwards with your elbows) and shoot instead of having to turn all the way around speaks to a much improved fluidity that skilled players are going to be able to use to do impressive things.

You can also pretend to be a trapdoor spider and sit in garbage bins until a guard walks by and quickly knock them out and hide the body.

The other big reveal from today’s demo is that Mother Base isn’t a menu that you jettison force labor to. It’s a physical place you can return to and run around in. And when you show up, everyone salutes you, because you’re the boss. In keeping with the less linear design that lets you tackle missions openly, you’ll have choices that dictate how your Mother Base develops over time, what platforms get built.

The sheep Snake scooped up from the battlefield is there and seems to be enjoying itself. We saw Ocelot hanging around, too, and a security UAV buzzing about (you can build them with proper investments). My favorite thing is that you can train (shooting) and spar (CQC) with recruits to raise their skills. I’ve never been as good as I’d like at CQC, so being able to practice freely will be great.

Mother Base isn’t just a hub you hang out at during missions, though. During our neatly scripted demo, rain started falling a bit after Ocelot gave a wave, and the base was suddenly under attack. We didn’t get to see all of the attack play out, but we were told that your actions during missions — how many enemies you make — will affect the rate of these sieges. Better keep recruiting.

And can we talk about the artistic design of Snake’s High Planes Drifter-red robot arm? It’s so cool! And it takes over the old “knock” function used for hitting walls to get attention (and can be used anywhere) by spinning and clicking like an adorable cuckoo-clock.

I’ve had some trouble getting too excited about anything in particular this E3. That changed after the Phantom Pain demonstration. The level of detail and nuance to the mechanics, on top of already great Metal Gear staples, is so exciting to see. The juxtaposed weird levity and war crime seriousness is in full effect and I just want to mess around with it for myself.