A rookie talks to a veteran

I spent part of last summer posting Rocket League GIFs with the second-hand knowledge that they were neat. I would link something in our staff chat and if the reaction was palpable enough, I’d write it up. It was like a robot trying to blog with human emotions. “Initiate Feelings.Excited Protocol.”

Now I get it, man. I get how cool all that floaty, flippy, boosty shit is because I’ve played Rocket League on Xbox One, and I can’t do any of it. I get pumped when I hit the ball in the direction of the goal. It doesn’t matter what the end result is; if the “Center Ball” bonus comes on-screen, I feel like the best Rocket League-er in the universe.

Patrick Hancock: Well, it’s about damn time! Rocket League quickly joined the “games with 100+ hours” club for me, and I still can’t put it down. Especially now that Season 2 just began, I find myself playing it as much as ever. What kind of game mode have you been playing mostly? 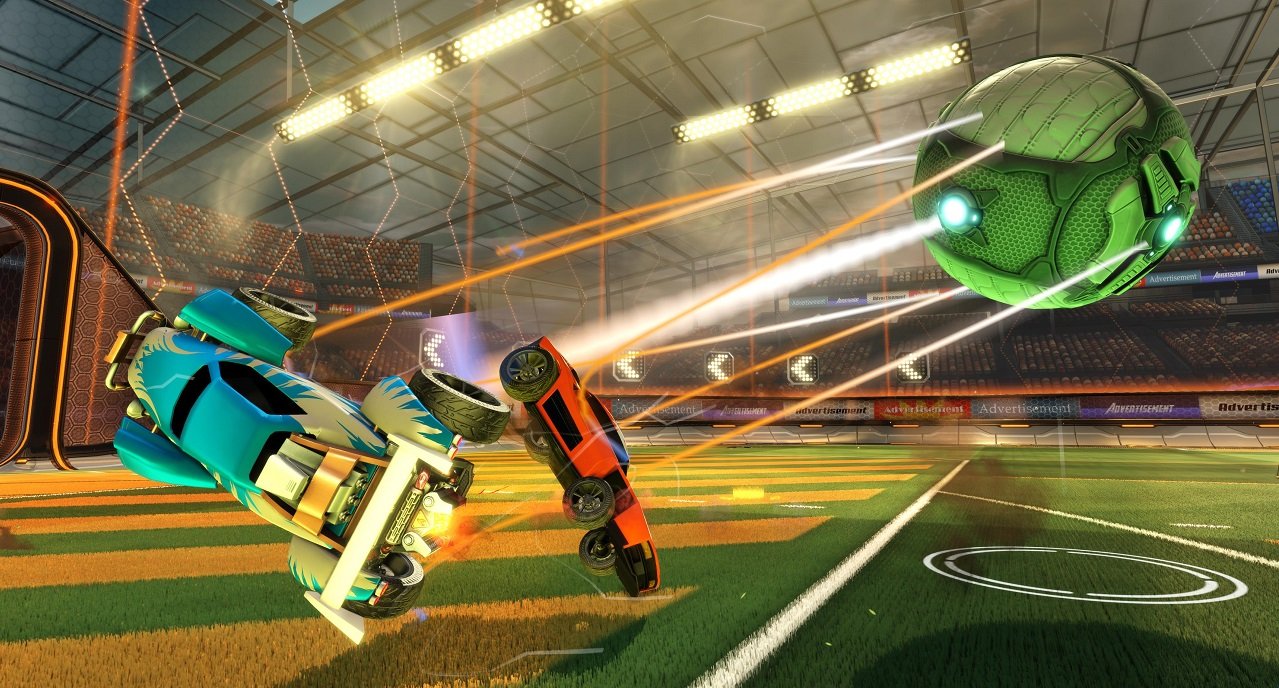 Brett: Just three-on-three, whatever the game funnels me into. I’m still new enough that I’m scared of the permanence that words like “season” imply. I’ll follow a four-goal game up with a zero-point game. I will be the MVP and then I’ll be the laughingstock. Or, I feel like the laughingstock, anyway; my teammates probably (hopefully?) don’t notice.

That’s the brilliance of Rocket League‘s multiplayer model, in my eyes at least. It’s tough for me to pin shortcomings on a single player. When someone goes, like, two and fifteen in Halo, you can tell that person sucks. It’s not the same in Rocket League because it all gets lost to the speed of the game. Instead, you can only tell when someone is very very good because of the aforesaid floaty, flippy, boosty shit. Is that how you ardent, committed players see it too?

Patrick: Yeah! Never put too much stock into the score screen. There have been times where I scored many goals, all of which were amazingly perfect setups from my teammates and essentially “layups.” Some of that stuff is wonky, too; assists have to be within a certain time limit of the goal and many of my awesome saves have been characterized as “Clear Ball” instead. Most people realize that the team wins or loses, not any one individual. Well, mostly.

I think the only time I feel like complete shit is when you see my screw-up in the replay. No matter how hard I mash the “Skip” button, everyone inevitably sees me score on myself or fly up and completely whiff.

Have you experimented with rocket flying yet?

Brett: Yes, insofar as I know it exists and I’ve attempted it. No, in that every time I’ve tried, I have all the grace and control of a deflated balloon zooming around the room while making a high-pitched fart noise. It’s why I’ve come to appreciate those GIFs.

I mean, I feel mighty accomplished when I do very little like hang out in front of my own net playing goalkeeper. THAT MAKEDONSKI’S A REAL TEAM PLAYER. So, when I see dudes competently rocket flying, I’m pretty sure they’re playing a different game than me. Or that they’re witches. If that’s you, I will burn you at the stake, Hancock.

Patrick: Erm, uhh. Nope, never done that stuff before. But if I did, I’d probably learn it from trying and failing a whole lot. I mean, the only way to get better at something is to practice, you know? Mess around with training modes (which are great practice, by the way), even while waiting for matches. Then, during matches, don’t be afraid to make a fool of yourself and fly up towards the ball, hit or miss. You know those times where the ball bounces really high, and all six cars are stopped, waiting for it to come down? THAT’S YOUR CHANCE TO SHINE, BRETT!

Remember what the great Kronovi once said: Rocket fly for the high balls, for even if you miss, you’ll land up among the goal, way out of position, upside down probably, and chances are, cost your team a goal. If that’s not inspiration, man, I don’t know what is.

Brett: I’ll be a Rocket League Vine star in no time at all.