Fans of things that are good should be pleased to learn that Capcom is bringing Ōkamiden, the Nintendo DS follow-up to the PlayStation 2/Wii title Ōkami, to North America. It shouldn’t come as a surprise, as the publisher had trademarked the name all over the globe, shortly before announcing it only for Japan at least year’s Tokyo Game Show.

Act shocked, because you don’t want Capcom to feel bad. But it’s nice to have confirmation, and after going hands on with a translated trial version of the game at Captivate, I’m convinced the game is headed in a direction that will surely please fans of the original. From the Sumi-e art style to how it feels making sweeping Celestial Brush strokes with the stylus, Ōkamiden truly nails the vibe of its predecessor across the board, while making fitting tweaks unique to Nintendo’s handheld.

Ōkamiden follows the adventures of Chibiterasu, the young sun god offspring of Amaterasu, the now iconic wolf from the original Ōkami. Being a child, the ludicrously adorable little wolf cub simply doesn’t have the power of his older, stronger, and wiser parent. Because of this, in Ōkamiden he’ll need assistance, which comes in the form of a number of in-game characters which can be directed using the Nintendo DS touch-screen and stylus.

In the trial version I played, the partner character on hand was Kumi, son of the arrogant, self-proclaimed warrior Susano from the first title. With Kumi on his back, I was able to move Chibiterasu around a gorgeous, hand-drawn-style 3D world displayed on the top screen by using the d-pad. Attacks are all mapped to a single button (which can be pressed repeatedly to string together combos), coupled with a jump button to further navigate obstacles.

It wasn’t long before the game introduced how it uses the Celestial Brush, the bread-and-butter game mechanic of the series. By pressing L or R, a “canvas” version of the world moves down from the top to the touch screen. It’s here that you use the stylus as the brush in a way that you might already be familiar with from Ōkami. Circle a naked spot on a tree to make flowers bloom, cleave a stone in half to clear a path, or draw in an empty spot on a bridge to allow forward movement. The canvas can also be used in combat, stopping time and slicing multiple foes with one long brush stroke.

But the Nintendo DS touch screen isn’t used only for the obvious Celestial Brush mechanic. Ōkamiden introduces a “Partner System” which allows players to guide teammates through obstacles and to solve puzzles. In the case of the trial, pressing X makes Kumi hop off Chibi’s back. By then using the Celestial Brush to draw a path (it appears as a red stroke), you’re able to direct your partner character through the world. 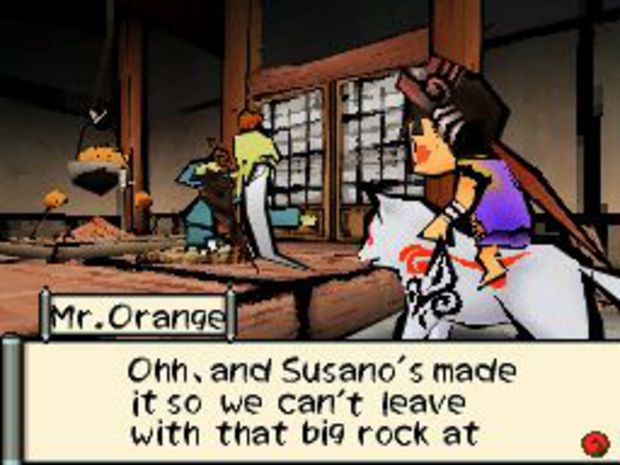 This can be used in a number of ways, the most obvious to trigger switches in the environment to solve environmental puzzles. In one, I had to direct Kumi across a cracked path, too weak to support the heavier Chibi; there he stood on a switch that created a bridge which Chibi could cross to a raised platform. I then had to guide Kumi to yet another switch which create one more bridge, allowing Chibi to move forward and join the young adventurer once again. Partners will also act intelligently, opening chests and returning items when guided with no additional instructions. While these are some of the simplest examples, it’s easy to see how this guidance system can lead to some clever (and likely mind-bending) puzzles further into the game.

While much of the world of Ōkamiden will look at feel familiar, producer Motohide Eshiro notes that just because it’s based in the same world, that doesn’t mean you’re simply treading old ground. In addition to new areas, the game will feature some of the same settings from the original, with all new buildings and other places to explore.

The game’s enemies, “Yokai” or demons inspired by Japanese mythology, may also look familiar as many are back and causing trouble in Ōkamiden. But each has been redesigned for the Nintendo DS, giving them a fresh look, and they will also be joined by a host of new demons in the final game.

Sound great? It kind of is, and this is coming from a pretty big fan of the original. (And who isn’t?) There’s a catch — Ōkamiden won’t hit North American shelves until 2011. Yes, that 2011. As in next year. The wait should be worth it, as Eshiro is aiming for more than roughly 20 hours of gameplay in Ōkamiden.