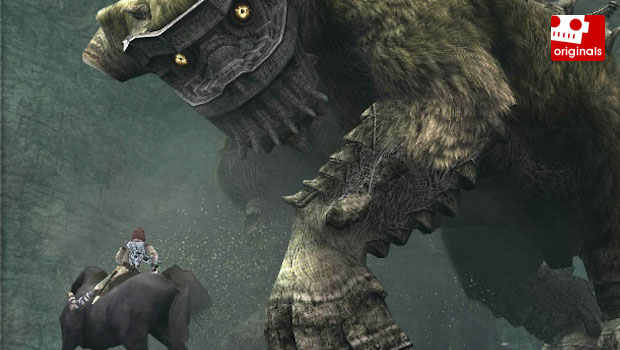 I’ve played videogames for the vast majority of my life, to the point where I’ve been fortunate enough to make it part of my life. I feel I could confidently challenge anybody to rival my passion for the medium, my respect for the art, and my simple, honest love of playing games.

Even so, I have a confession to make. I hate ICO and I cannot for the life of me understand why anybody feels a deep and meaningful connection to Shadow of the Colossus.

Now, before you write this off as “trolling” or think I am trying to be contrary on purpose, you have to understand — I don’t enjoy this. I find no fun in not having fun, and when I see others enjoying a game I cannot, it’s rather horrible.

But what can you do when a videogame beloved so many is like oil on water to you?

My wife adores Jeff Buckley, as do a fair few people I’ve met over the years. They say his music touches their soul, speaks out to them, and provided the soundtrack to a considerable majority of their lives. I’ve heard his stuff, and I just don’t get it. It doesn’t sink in. There’s something interminably frustrating about that, to know that somebody is getting so much satisfaction out of something, and you can’t access whatever font of pleasure others can merrily tap into at will.

Having played a little of the ICO & Shadow of the Colossus Collection, I found that I still couldn’t penetrate whatever depth there was to these games. ICO, to me, is a glorified escort mission with poor controls, while Colossus is a slower, less interesting Prince of Persia with … poor controls. I tweeted this past weekend that I just didn’t get why they were so popular among “hardcore” gamers, and was swiftly buried under a torrent of desperate and invested appeals.

Many of these retorts said the same thing: the atmosphere, the visuals, the rich artistry of it all — that’s why these games are enjoyed so much. A few even admitted that the gameplay of both titles wasn’t quite up to par, yet still contended that the aesthetic pleasure was enough to make up for it. I understand that; I’ve been there before. I’ve had games speak to me from beyond a veil of poor interfaces and aged gameplay. I am not here to argue whether or not Team ICO’s games are good or bad. I’m here to tell you that my low opinion of these games is not something I revel in.

In fact, if you love ICO or Shadow of the Colossus, I’m quite jealous of you. I wish I could join you in gushing over these amazing works of art. I love videogames that can make an emotional connection with the player, and to try these games and come away with nothing but exasperation and regret that I wasted my time completely confounds me to an unpleasant degree.

To use an incredibly nerdy — but game-related — comparison, I feel like the Heartless from Kingdom Hearts, or really any stock character that is born without feelings and watches enviously as the “normal” people laugh, cry, and love, and feel things that I can’t. There’s an almost crushing emptiness when these games are brought up, a black hole where I know unfettered adoration ought to be. Some people think that I dislike certain games for fun and profit, but the truth is this: it’s deeply uncomfortable.

The same is true of fighting games, although there’s a far more scientific reason for my disliking them — I just can’t play them. Of all the genres of games out there, the one-on-one fighting game is something I’ve never been able to wrap my head or hands around. Of course, it didn’t help that Rise of the Robots and Primal Rage were my fighters of choice as a child, but the fact remains that, when people get excited for a new Street Fighter or Marvel vs. Capcom, I’m on the outside looking in. I can see the passion, but I cannot feel it, and I envy all of you who can.

When Street Fighter IV released and fans begun to gibber with excitement, it was like I was a man without feet, surrounded by people who’d just bought the hottest new pair of shoes.

The worst part is, disliking some of these games makes one feel like less of a gamer. Destructoid itself voted Shadow of the Colossus as its greatest game of the last decade. A game that means absolutely nothing to me, voted by my primary employer as the best game of an entire ten-year span. How can one not feel something of a fraud when confronted with a fact like that?

There are plenty of gamers out there who would happily help that attitude to fester, as well. One reader told me that he’d lost “huge respect” for me after finding out that I didn’t appreciate ICO or Colossus. Others in the past have entreated me with incredibly patronizing language, as if attempting to explain nuclear physics to a three-year-old. Telling hardcore gamers that you hate ICO is like telling a Tea Party supporter that you’re gay … only with a significantly decreased threat of being shot.

Is it really so wrong to not love what everybody else loves? It certainly is frustrating, but gamers these days are so quick to jump down the throats of anybody who doesn’t march in step with them that they might have forgotten that we’re not all the same person. The phrase “if you hate this game, you’re not a true gamer” is one that I’ve seen far too many times over the years — sometimes the wording is different and the games are never the same, but the sentiment is identical across the board. If you don’t like a certain game, you are a fraud, and you deserve nothing more than to become a pariah.

“We have this weird attitude that if we don’t like a popular game either we’re wrong, or the game is bad,” Ars Technica editor Ben Kuchera told me after my Team ICO confession. “Games aren’t objectively good and bad, and we don’t need to connect with every one.”

Ben is right, of course. No gamer needs to love the same games as everybody else. There is no one game good enough to define the difference between a gamer and a non-gamer, and thinking that one exists is extremist thought of the highest order.

Knowing this truth doesn’t take away the sting of disliking games that so many others adore. It doesn’t make one feel more justified or soothe the jealous pangs. Writing this definitely helps, though. Attempting to communicate exactly how one feels about hating the games you love is somewhat cathartic. And while there are definitely trolls out there who will take a contrary stance just to watch the feather fly — who will say they hate a game simply to rile up its fans and make them dance like puppets — there are others with legitimate, valid reasons for not enjoying the same things as you, and chances are good that they don’t get off on it. Quite the opposite, in fact.

So, what can you do when a videogame beloved so many is like oil on water to you?

But you can at least write a fancy little blog post about it, and hope people understand.