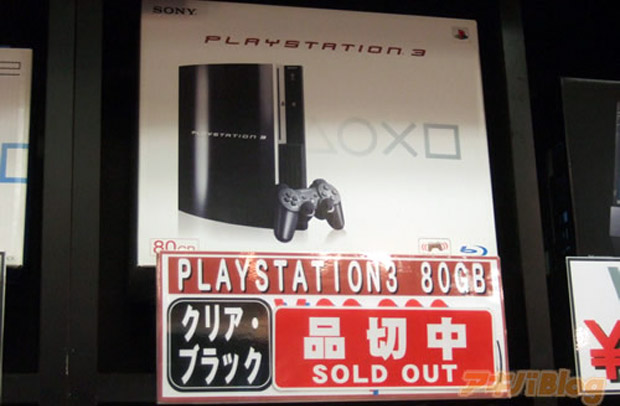 It looks like the PS3 is sold out in Tokyo. Why? We’re not sure. It could have something to do with Summer Comiket (yummy cosplay here at Japanator), or it might be that people are off work because of the holiday (Obon). Or it might be that Sony is up to something.

Regardless, Akibablog reports that all the stores in the Akihabara area are sold out of PS3s. They say that one store staffer said that there has been no PS3 shipment for almost two weeks. Big stores, like Gamers, Sofmap, and Asobit, were all cleaned out, with some saying that they will not be able to reorder.

According to a staff at one of the stores, “we have not gotten PS3 for more than 2 weeks, and it disappeared from a list of items we are able to place an order to a wholesale store. On top of that, since now is during summer vacation, people purchase products more than usual. So, there is no stock left.”

This could have something to do with the recently announced PS3 Slim and the price drop. Maybe they’re clearing the old stuff out first.