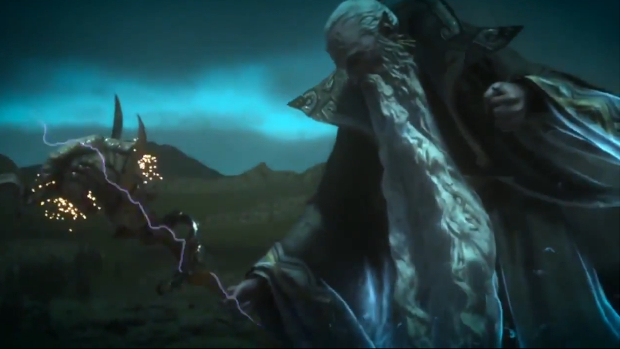 Final Fantasy XIII‘s summons were ok, but in using the correct party of Fang/Lightning/Vanille, you only get to see a handful (Bahamut, thankfully). And the whole techno Transformers look, while thematically consistent, led to a bit less wonder and awe. I think the only time I used summons in XII was when you needed to in order to solve a puzzle.

And even in X with a summoner in the leading-ish role, they were a bit dull as big monster helpers rather than shit-wreckers. Final Fantasy VIII was probably the last time I greatly enjoyed summons, which were well tied into the junction system.

Anyways, there’s my rambling preamble to summons in Final Fantasy. You probably watched the video before reading it anyways. If not, do so now.

I’ve watched Ramuh get summoned a few times and it doesn’t seem to do much sleight of hand camera tricks. Whatever enemies you’re facing, where ever you are in the world, that’s what you see in the background and where the summon happens. If there are trees, they will ember for a while after. If not, just the ground. It’s also nice to be able to do the lead up (darkening skies, lightning) without interrupting the battle. Your homies just keep fighting along until you’re plucked into the sky. Not sure how that doesn’t kill them, though.