Let me show you my ‘Oh hell no’ face

I should have known. I should have seen the title Office Space: Idle Profits and figured it would be another goddamn clicker game. I should have been able to look past the Fallout Shelter-esque art direction and seen this is worth neither my time nor the data it would take to download and play it. I should have known better, but when Google Play asked me if I wanted to sign up for a release notification, it took nary a second for me to click yes.

Office Space: Idle Profits is based around the penny stealing scheme from the movie, you know, the one from Superman III. The object here is to upload the virus that would steal those pennies into the different floors of Initech, from Milton’s desk in the basement all the way up to the boardroom. The building is quite small, only 10 floors tall and you unlock all of them quickly. This being the clicker game that it is, you’re routinely encouraged to burn that mother down, starting fresh from the bottom but earning money more quickly.

The floors are occupied by either random characters or those from the movie, whom you can level up to earn more money. The screen where you can do the actual clicking recreates moments from the movie, like Tom’s blow up with the Bobs. Then there is… you know what? It’s a fucking clicker. If you don’t know what that means consider yourself lucky. 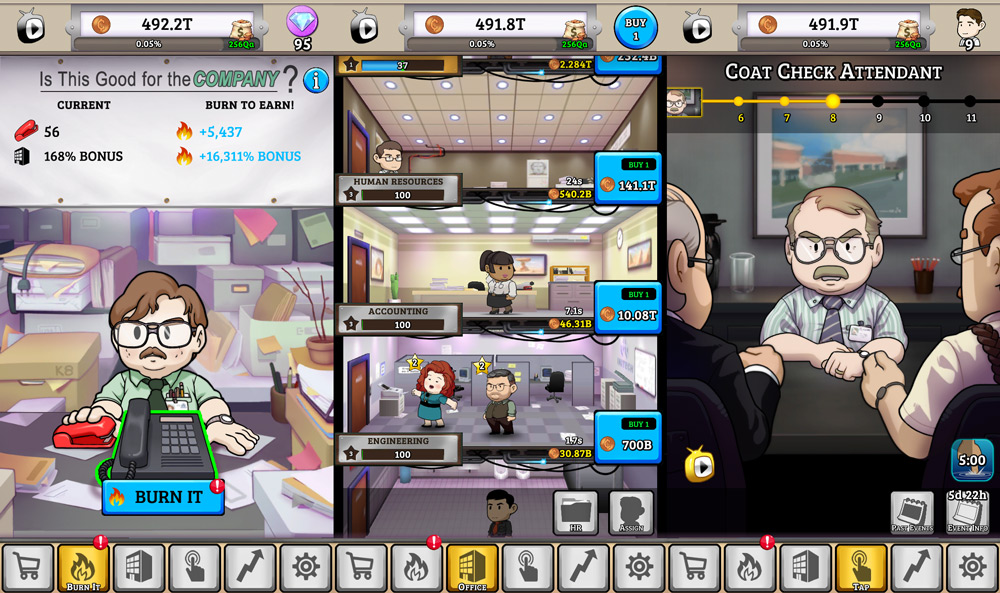 I’ve railed against the clicker genre before and I will continue to do so until it dies. It is a pointless, useless waste of memory that rewards not your talents or your skills, but your ability to simply open the app. These games are listed under “simulation” but what exactly are they a simulation of other than mankind’s continued spiral into a Brave New World? Office Space: Idle Profits is so empty and without meaning that if someone were to stupidly remake Office Space, and turn Initech into a corporate game development studio, it would be the exact type of game the company would make and Peter, Samir, and Michael Bolton would rebel against.

Now I get that this could all be an elaborate piece of commentary and criticism, that Idle Profits mimics the mind-numbing tedium of middle-management white collar employment with an equally banal phone app. The same can be said about Meme Run, that it too is not a serious product but an indictment of what has become of the art of game development and the industry feeding our app stores and eShops with carbon copies of the same tired formula that seeks not to innovate, but to remain reliant on those most easily entertained by the least amount of effort.

The argument could be made of both products, but once we’re expected to pay actual money, the argument falls apart. Meme Run could be a scathing condemnation of indolent ideas and dreary execution, but instead, it was a premium priced runner full of indolent ideas with dreary execution. Idle Profits could be a smirking denigration of the clicker genre, but with its myriad of microtransactions only a fool could convince themselves of that.

Office Space the movie is one of my 10 favorites because it astutely exposes everything wrong with the faceless, cubicle, 9-to-5 life trapped in front of a computer screen. Office Space: Idle Profits is perhaps the worst thing I’ve ever downloaded onto my Galaxy Amp Prime because it’s the embodiment of everything that is wrong with mobile gaming.