[Offbeat Hall of Fame is a showcase of the cool, often bizarre products and media from years past that celebrate videogames and gamer culture.]

I love videogame soundtracks. Audio is such an integral part of the gameplay experience for me that I’ve been known to purchase games based solely on their music. I also love television shows based on videogames — well, in theory if not always in practice. However, when you start talking about soundtracks of videogame-based TV shows, you reach a critical juncture where terrible things can happen.

The Ruby-Spears Mega Man cartoon was really good, but it was also really bad for the same reasons. Nonetheless, I enjoyed the show and couldn’t wait to discuss the latest episode with my friends come Monday. Beyond the catchy if lyrically barren theme song, I thought the BGM was pretty kickin’, featuring the perfect pump-up jams for scrapping bots. So good was the score, in fact, that it was reused for the Ocean Group dub of Dragon Ball Z!

When I heard that the Mega Man soundtrack was receiving a physical release, I knew I had to have it, but it wouldn’t be until recently before I finally got hold of a copy. Was it everything I dreamed it would be? It would have… if not for the fact that the music on the album isn’t actually from the show! 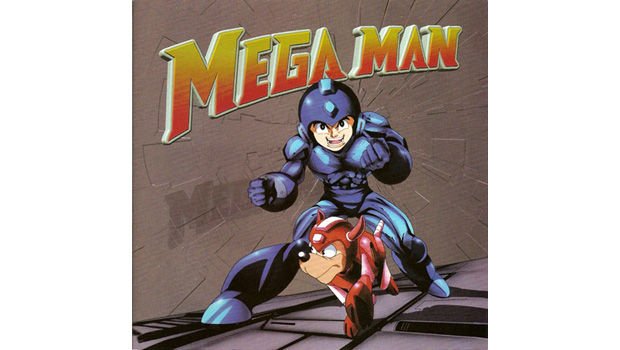 Well, that’s not entirely true — the songs were featured on the show very briefly. During the first season, the end credits theme was just an instrumental version of the title theme. During the second season, songs from various artists of the time played instread. It was these credits themes, which had no connection to the show whatsoever aside from these brief appearances, that were compiled for the official soundtrack.

Yeah, it’s one of those “inspired by” deals that a lot of record labels love to shove onto folks to squeeze them out of their hard-earned money. Whether the music is good or not is irrelevant when the publishers are obviously trying to cash in on a popular name, and this practice needs to stop. They are glorified mixtapes, the kind that teenagers would make to remind themselves of a particularly uneventful summer or to impress their latest high school fling.

The Mega Man soundtrack, released in April 1996, consists mostly of rock and is rounded out by a hip hop joint, a couple of house tracks, and one hilariously out-of-place reggae number. (Someone explain to me exactly what element of the show that was inspired by. Rasta Man? I must have missed that episode.) I would be seriously impressed if anyone could recognize half the artists represented. The biggest name on the list is probably Skid Row, contributing “Eilieen” as heard above. Beyond that, though? Pfft.

Good gracious, this CD is strange. Listen to the lead track “Driver” by The Hollowbodies. There was that one episode where Mega drove a sports car; I guess that counts as an inspiration. He was escorting a trio of high school troublemakers to their community service assignments, so his actions don’t quite synch up with the themes from the song. Doesn’t matter. Whatever tenuous connection I can make, I’ll make!

Here’s “Sinnerman” by Extra Fancy. Remember that Robot Master? From that one game? Sinner Man gave Mega the Debauchery Cannon and was weak against Bible Man’s Hail Mary Shield. Or am I remembering things incorrectly? Yes, I probably am.

I don’t know why, but this song reminds me of Ghost Rider for some reason. Since Ghost Rider is in Ultimate Marvel vs. Capcom 3 and Mega Man’s face is on a poster in one of the levels, they totally were in the same game together. By that logic, “Sinnerman” is three degrees from Mega Man, and that’s close enough for me!

Let’s talk about that hip hop track, “Realms of Junior M.A.F.I.A. Pt. 2” by Junior M.A.F.I.A. Ever heard one of the group’s cuts? They aren’t exactly family-friendly. For this album, every other word got bleeped out, yet the record label still botched the job by missing key phrases like “blunt,” “dick,” “getting high,” and “your girl’s slobbing me.” Wouldn’t make a difference anyway — the song is about dealing drugs. The only way to properly sanitize it would be to not include it on a friggin’ kids’ album in the first place.

Maybe this song was included to serve as an allusion to Dr. Wily’s gritty lifestyle. He’s gotta make the money to maintain his Skull Fortress and all his equipment after all, and I highly doubt any legitimate business would accept his resume. His only option is to deal on the streets. Dude is straight thuggin’.

Oh goodie! The “Mega Man Theme” is the closing track! The album is redeemed!

This is misdirection at its finest. You think you are getting a full version of the show’s opening theme song, but instead you get kicked in the nuts. Fifteen seconds in, you hear some deep-voiced brute speak “Mega Man,” then He repeats that one line throughout the six-minute runtime. Congratulations on making a “theme song” with even fewer lyrics than the original theme. Really, you guys should be proud.

I’m super grateful that I picked this album up as an adult, because I can only imagine how heartbroken 10-year-old me would have been had I received it when it first came out. At least now I can laugh at its absurdity and novelty, but I feel bad for kids who were duped into thinking a Mega Man CD would actually have anything to do with Mega Man.

You may be wondering why I wrote “soundtracks,” plural, up in the header as if to insinuate that there was more than one of these accursed relics in existence. Well, have I got a surprise for you! 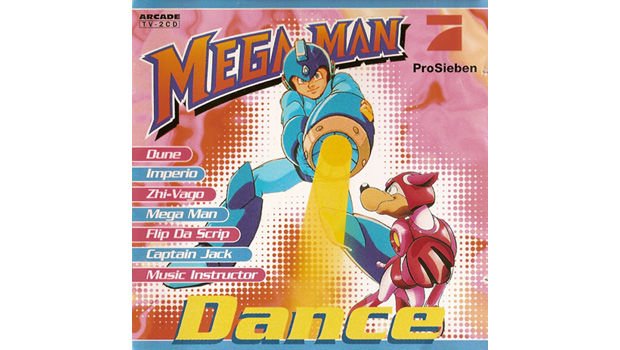 While the self-titled Mega Man album is already fairly obscure, Mega Man Dance is even lesser known. I only discovered it by chance one day way while browsing the music section on Amazon. Being the crazy Mega Man collector that I am, I had to order it and give it a listen.

The reason you probably never heard of Mega Man Dance is that it was only available in Germany. Released in March 1996, it is even less of a soundtrack than the American album — none of the songs with one exception are heard on the show, not even during the credits, at least to my knowledge. As its name implies, it is a compilation of dance and club music that was latched onto the hottest cartoon on the airwaves at the time. Despite being similarly detached to the source material, I think it’s much better package than the American CD.

Why is it better? Because I’m a sucker for Eurodance, for one. Better still, the “Mega Man” theme on this album is the actual theme from the show. It’s not the “Super Fighting Robot” rock anthem we remember but instead the electro-charged version from the German dub. It’s not as endearing to one groomed on the original, but I like it a lot. No matter which flavor you prefer, however, the dance album automatically wins for actually giving the fans what they expect.

The remainder of the album is an acid trip like none other. There’s an extremely hillbilly remix of “American Pie” by Just Luis, as heard above. I get flashbacks to “Cotton Eye Joe” by Rednex, and I’m reminded of how hilarious foreign stereotypes of America can be. Then we got a butchered version of “Aquarius,” a contribution by Bemani regular Captain Jack, Mission: Impossible techno, and just a train of the most curious musical oddities around.

My favorite track has to be “King of the Ring” for the fact that it’s a Sonic the Hedgehog song on a Mega Man album. Sonic and Mega Man together, how mind-blowing is that?

The song is off a Sonic the Hedgehog dance CD that coincidentally happened to be released by the same music publisher in the same month as Mega Man Dance. I guess somebody in marketing was really gunning for those cross-promotion sales. Either that or the person figured, since Sonic and Mega Man are both blue, no one would be able to distinguish between the two characters.

If you had to pick one Mega Man album of the two, try to track down the German release. It consists of 38 tracks versus the American album’s 12, so you easily get more for your buck. On top of that, since no effort was made to tie the musical selections to the TV show in even the slightest, Mega Man Dance is free to be as off-the-wall and insane as it wants to be; there are no expectations attached. Buy it for the laughs, but only buy the American CD if you are a masochist who enjoys having their childhood dreams reamed deep within their ear canals.

I’m resigned to the truth that a true Mega Man cartoon soundtrack will never be never happen. At least I can always count on the geek music community to give me what I want to hear.