Know what sucks about the Wii? Shut your whore mouths before you say what I know you wanna say. The correct answer is F-Zero. Where is it, Nintendo? Best futuristic racing series ever made — hush, I said — and one of the best games on the GameCube. The follow-up should have arrived by now.

I did a foolish thing. A few years back, I traded F-Zero GX into GameStop for pocket change. I was young and impulsive. You have my word that I don’t trade in squat anymore. Hell, I don’t even toss away the magazine subscription inserts tucked behind the manual. The game is cheap enough now that I should just pick it back up, but I’m still holding out for that phantom Wii sequel.

So I did what I usually do when I contract gaming blue balls — I pounced on the closest thing that kinda looked like what I was lusting after. That game happened to be Tube Slider. The name even sounds skanky, but I never think clearly in a weakened condition.

Tube Slider was developed by Nd Cube, co-developer of 2001’s F-Zero: Maximum Velocity on Game Boy Advance. I imagine the experience with F-Zero gave the company the notion to try a home console version, but Nintendo was having none of that, what with Amusement Vision getting GX nice and ready. So Nd Cube picked up its ball and went to NEC Interchannel, a brilliant move considering NEC hasn’t been relevant since the TurboGrafx-16 days.

The interesting nugget here is that Nintendo owned a majority stake in Nd Cube at the time (before assuming full ownership this year). Then Nd Cube goes off and makes an F-Zero clone under a different publisher for Nintendo’s GameCube and releases it in April 2003, a scant few months before the superior and better publicized F-Zero GX dropped. Awwwwwwwwkwaaaaaaaaaaard!

Something tells me that Nd Cube’s initial enthusiasm masked a deep well of cluelessness. A couple of glaring flags lead me to believe that things weren’t all hunky dory. Take the game’s full name, for instance. There’s a subtitle!

“The Championship of Future Formula“! Mmm! Rolls right off the tongue, doesn’t it? There’s a championship involved? A racing game that involves a competition whereby winners are ranked by completion time? Thanks for keeping me informed! I would never have guessed had you not spelled it out in tiny-ass font!

“The Championship of Future Formula Vehicles“! Well, thank you once again, kind sirs! I would never have inferred from the context of the word “formula” on the box that vehicles would be involved! I was guessing that we’d be riding formula zebras! Could have fooled me!

On a hunch, I flipped to the introduction page in the manual and found a line that read: “The future of championship formula racing is faster, sleeker, and more dangerous.” Whoa! Confirmation that our vehicles will be doing actual racing! For a moment, I was afraid this game would be about future cargo hauling! But now I’m confused — the future of championship formula? I thought this was the championship of future formula! Is that like a secret mode or something?

The game is referenced as something completely different in three separate instances. Was Nd Cube even paying attention? Who did the packaging material? Let me consult the credits in the back of the manual… ah! The Beeline Group. Hey, Beeline Group? Go fuck yourselves.

Remember when KG and Jables beat the bastards at city hall and ordered the scientists to develop tube technology for all our travel needs? Tube Slider is that future. Know those tubes you sometimes travel through on an F-Zero track? The ones that allow you to drive upside-down and get you all disoriented? Yeah, that’s the entire game.

What does that mean? First, you can’t fall off the track or suffer damage from slamming into the rail because there are no boundaries. Second, there are no unique elements or hazards associated with each course. Every race is the same nausea-inducing spiral of batshit architecture and seizure-triggering colors and sounds.

I swear, this game has some of the ugliest texture mapping I’ve ever seen — many surfaces look to be composed of low-res JPEGs. Not that you’ll have much time to notice any specific thing, though. Each race is such a bizarre patchwork of hues and patterns that it can be difficult to gauge when the next turn is coming up. The mishmash of sights and sounds whizzing past your head has so much in common with Willy Wonka’s LSD-fueled river ride through hell that you could probably use video of the game in action to cultivate phobias in small children.

If the acid trip doesn’t do the job, the shitty techno music will. There are a handful of tunes in the game that are nigh indistinguishable from one another, only adding to the confusion. It sounds as if Moby and The Crystal Method had a mutant love child who recorded compositions by smashing his face repeatedly onto a keyboard then running the resultant cacophony through FruityLoops. Do yourself a favor and select “BGM Off” before the start of each race, okay?

There are a grand total of eight tracks in this game, a pathetic number when you compare it to, oh, just about any other racing game ever made. To buff up the list, the developers tossed in a couple of mirror tracks. Padding out a racer with reverse tracks is probably the laziest thing anyone can do, yet these guys go a step beyond by only flipping two and calling it a day. That’s fucking lazy.

There are eight racers to choose from, but only one doesn’t blow hard. Look at all the photos in this article. That red vehicle is the Gekko, and the reason it is the only vehicle I’ve been able to find assets for is because everyone else who played this game understood as I have that it was the one junker that wouldn’t spaz out uncontrollably. You might also notice eight empty slots on the vehicle select screen and hold out hope that better rides are just an unlock away, but don’t get excited. They’re merely paint jobs for the existing death traps.

Before each race, you can select what kind of “Sub Vernier,” the game’s needlessly pretentious phrase for “speed enhancement,” your vehicle will employ — Turbo or Booster. Turbo functions much like the turbo in F-Zero X and GX in that your meter will deplete as long as you hold the turbo button. Booster gives you up to three one-time boosts which can be replenished by filling up the energy meter. Your meter will fill up automatically as you drive, but blue, green, and red tokens littering the course can instantly fill up your meter or grant you a temporary speed increase.

Another method to refill your meter is by siphoning energy from other racers. If you are closing in on an opponent’s rear and hold your distance for a few seconds, you’ll gradually transfer their power to you. Naturally, they can do the same, but you can turn the tables by hitting the “Sub Vernier” — God, I hate saying that — just as an opponent latches onto you, thereby reversing the stream. This is literally the one element of decent strategy the game has to its name.

The tubes really play a number on any racing skill you might possess. Since there are no barricades, you should feasibly be able to complete a race without turning at all, you’ll just whip about the tube in circles. Of course, this will lead to your vehicle stalling, so you have to maneuver ever so gracefully over humps and around bends. The learning curve here is pretty steep — merely turning can cause you to spin out, so you have to become intimately familiar with the sliding system.

Here’s where the bullshit kicks into overdrive. It slips people’s minds often, but the GameCube controller has pressure-sensitive triggers. That meant that one function could be mapped to a light press of L or R while a separate function could be mapped to a full press. I don’t know of many games that made use of this, maybe because time-sensitive game situations called for quick, instinctive button inputs while fully mashing the triggers required more conscious effort.

Guess what Tube Slider does! Fully mashing the triggers activates a slide booster, but lightly tapping them does jack. So you’ll be driving along, see a turn up ahead, and go to press the trigger, but you do it so lightly that, when you tilt the control stick, your vehicle sparks up and flips in reverse. You’ll be zipping down the track at 500 miles per hour, coming up to an S-bend, and you’ll have to go up to your brain, knock on the door, and say, “There are some turns up ahead. Hammer that shit! Hammer that shit! Don’t get distracted by the psychedelic light show! Don’t half-ass it!” It’s really hard to keep this up in a game that requires split-second decisions.

The AI is cheap, the difficulty spike from one Grand Prix circuit to the next is too ridiculous, and the split-screen mode is… well… look: 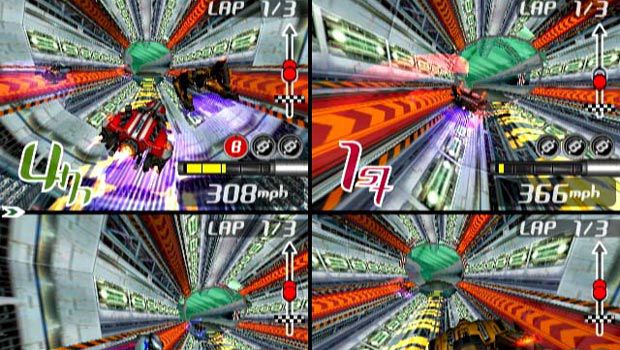 If you could barely see shit before, you definitely won’t now with all this vomit on the screen. This is not a multiplayer game. Playing with other people is a greater risk to your eyesight than using the Virtual Boy. Thankfully, you’ll never have an opportunity to play multiplayer because no one has heard of this game. Well, you have now, but I know you know better.

Nd Cube should be embarrassed. How does Nintendo reward their shame? By forcing the company to develop Wii Party. That’s a fitting punishment.