The Simpsons is an institution. Its relevancy over the years could be charted along a sine graph approaching zero, but no one can deny that it has been a great influence on American pop culture. As with any other phenomenon, a cavalcade of merchandising has followed in its wake for better or for worse.

The Simpsons marketing machine has pumped out a bevy of videogames that can best be described as disreputable. The cream of the crop was, of course, the arcade game from the early ’90s. God, I miss the arcades! You people killed ’em! You stopped leaving your house! You’d rather play online! Man, to hell with online! You all deserve to burn!

A decade later, we got The Simpsons Road Rage, an apt reflection on the sad state of the arcade scene. Itself a perverted variant of Crazy Taxi, it was the filthy port that no one asked for and no one wanted. Now, I say “port” despite there never actually being a Road Rage cabinet because it’s like they were working off an original project that never came to fruition. Somewhere, somehow, somebody cut some corners.

Who is supposed to be the Big Bad of the industry today? Activision, right? It used to be EA before it turned over a new leaf, but I don’t buy the charade. People don’t just change out of the blue, see. Maybe they do, but I can’t be convinced otherwise when games like Road Rage exist. And I’ve got proof to vindicate my sentiments!

There was this suit against Fox Interactive, Electronic Arts, and Radical Entertainment filed by Sega of America for infringement on a patent associated with Crazy Taxi. The patent in question detailed a game concept in which players drive towards highlighted map destinations by following an arrow that always points in the right direction. What could have been an ugly situation for Fox and company was ultimately settled outside of court.

Now, does that sound like a shining paragon of morality to you?

If I may be perfectly honest, I don’t even think the original Crazy Taxi worked well as a home console game. Don’t get me wrong, it’s fantastic! It’s the score attack archetype, the quintessential arcade experience. These kinds of games don’t resonate in the market anymore except as inexpensive downloads because they lack substance beyond their initial concept. That’s why arcade ports are often fluffed up with story, minigames, and the like.

Again, totally fine by me. You gotta enjoy the simple things.

Road Rage substitutes expanded content with Simpsons one-liners. Repeated one-liners. Boring, un-funny one-liners. Over and over and over again. I’m so glad I spent less than ten bucks on this game because, if all it can offer are in-jokes in the form of crudely rendered buildings that only appeared in single episodes of the show, I would have eaten my own shorts had I spent any more.

So Mr. Burns does what he does best, acting like a giant tool, by buying out the Springfield Transit Corporation and converting all the buses to run on radioactive nuclear goop. The good citizens are having none of his sh*t and decide to drive around town giving people lifts for exorbitant fees. A hundred bucks just to run down the block? Only in Springfield are people so willing to part with their hard-earned cash. 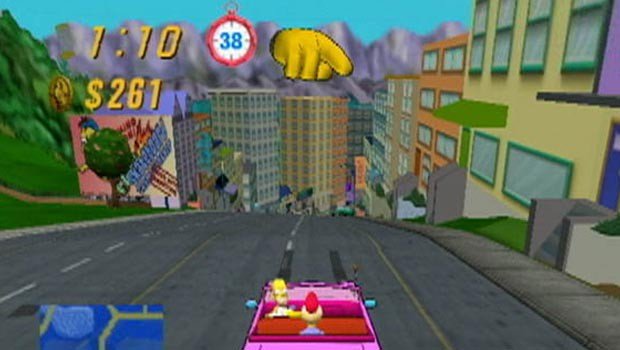 Before jumping into the main game, I wanted to get acclimated to the game’s controls by mucking about in the free play mode, Sunday Drive. You select from an assortment of Simpsons characters, most of whom are unlocked by earning money in the main game, and just drive about searching for hidden shortcuts and admiring the flat, muted colors of the Springfield cityscape.

The visuals look like someone suffering from high-grade ulcerative colitis has been dropping supernova splatters all over the screen. Christ on a merry-go-round, it’s a pastel nightmare! It’s like the guys at Radical couldn’t decide whether to go full-on cel shading or not, so we get these alien-looking character molds that contrast heavily against the PS1-era environment geometry.

From the manual: “Toon Renderer(TM) technology provides that authentic look of The Simpsons(TM).”

Tell me, does this look authentic to you?

Just like the TV show, right? Wow! It’s like I’m right there in Springfield! Did they seriously trademark that “Toon Renderer” crap? Good decision, guys!

Driving with any degree of competency is not happening. I’m playing the PS2 version over here, fiddling around with the sticks, and Homer is slipping and sliding around like he’s on a God damn Jet Ski. You try to inch the stick just the tiniest bit and everything spazzes out on you. I had to settle for the D-pad, gaining marginal control but otherwise still fighting a broken input scheme that was developed by monkeys on opium.

Drive around and get stuck in empty space. I am two feet from a guard rail and my vehicle stops dead. Slam another vehicle and watch it do corkscrews in the air before landing across the road and impeding your progress. Sh*t stacks up! Keep playing and the entire scenery falls apart and becomes one large death trap that prevents you from doing anything at all.

Mission Mode gives you ten short trials that involve nothing but knocking over newspaper stands, street lamps, and such. The game gives you some background for each mission, it tries to add a dash of spice or whatever… they could have replaced the whole mess with big orange traffic cones and I would be just as enthused to repeat the same missions over and over and over and over.

The worst part is the loading! It takes f*ckin’ forty seconds or more to load anything in this game! Many missions don’t even last half a minute! You spend more time looking at that black loading screen than you do actually playing the game! If you screw up in the first second of play and select “restart mission” from the menu, you still have to wait the full duration! The environment is already loaded! Just drop me back at the f*ckin’ starting line!

I get to hear the same sound bites repeated ad nauseam. No, Lisa, knocking over planks of wood in protest of the logging industry is not ironic. It’s hypocritical and I hate you and your stupid electric car. Do you people have anything interesting to say? Where’s the funny? I’m not laughing here! Come on, Simpsons! Make me laugh, assholes! 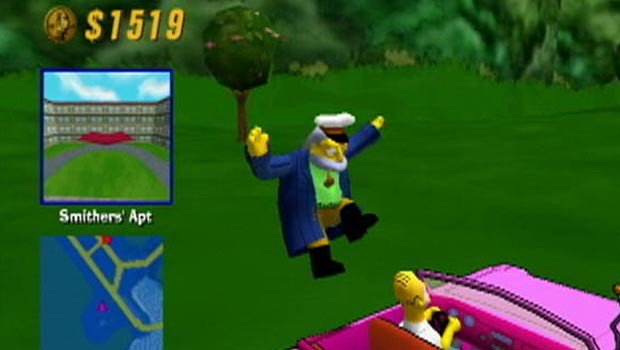 I finally beat Mission Mode and unlocked “The Car Built for Homer.” Does it drive any better than the Sedan? Hell no. All of the cars in this game are junkers. If there is some kind of attribute balance then I’m not seeing it. The only car I feel comfortable with is Professor Frink’s hovercraft, but then I have to contend with his migraine-inducing throat emissions. I guess that’s the trade-off.

Road Rage mode is the black soul of this unholy mess. Pick up people, engage in what may or may not be actual conversation as 99% of all the lines in this game were recorded separately and without any consideration for how well they would mesh when spoken in tandem, drop them off, and take their money plus a bonus for how speedy you were. Then drive around town and pick up those same people in a completely different location or, hell, even the original spot! Consistency!

That’s it. There’s nothing else to it. Shuttle people here and there and make some scratch. Run out of time and start all over again. Keep making money. Gotta make that money. You can probably make around $1000 per minute on average. I managed to exploit a loop in the game where I took people from the hospital to city hall literally across the street and then started the sequence over again. Made a cool $40,000 in about half an hour.

How much money do I have to make again? Let me check the manual: “But it’s all for a good cause: To earn $1,000,000 to buy back the transit system from Montgomery Burns and save the town from his evil ways.” 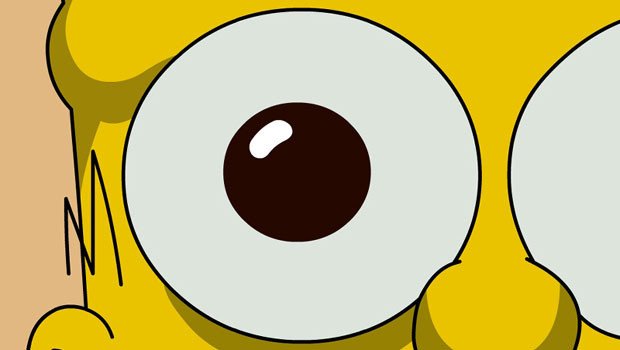 THE BLINKY SCALE OF A MUTATED ABOMINATION BEFORE THE LORD: