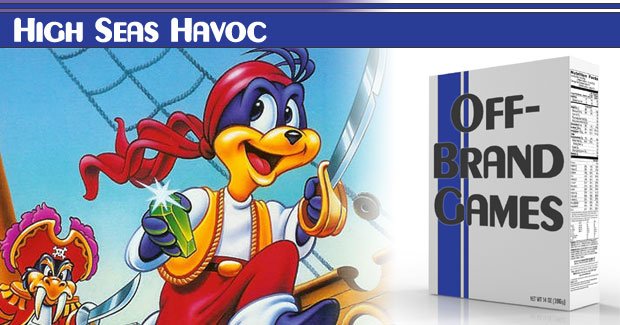 There’s an art to deception. Have you ever gone to a fitness club on the promise of a free two-week membership only to be given the ol’ bait-and-switch? You have to sign up for at least a month in order to get those free weeks, or you have to sit through some inane marketing presentation. All you wanna do is get out of that place as fast as you can, find a Taco Bell or a Wendy’s, and cram your gullet with about a billion thingies off the dollar menu.

Consider a video game example — who thought Brütal Legend would be an RTS? No, we wanted a heavy metal-themed hack-and-slash with hilarious Jack Black one-liners interspersed throughout. I could say something here about assumptions and how people who “assume” make an “ass” out of “u” and “me,” but let’s be real. When something looks like a duck, walks like a duck, and quacks like a duck, you’re gonna be pretty miffed when it turns out to be a kangaroo.

Ironically, the whole goal of these “Off-Brand” articles is to potentially discover games that rise above those initial assumptions. Then again, there are times when I don’t want to be surprised, as is the case with High Seas Havoc. God, why couldn’t it have been just like Sonic the Hedgehog?

Oh, fuck. It’s Data East yet again. Ya know, I really ought to do a running tally, see how many rip-offs a single company can crank out. I mean, there have gotta be companies whose revenue stream revolves entirely around IP theft. Whether the games are good or bad, a very damning case starts to build against them after a while. Is that how they want to be remembered?

Maybe Data East just wanted to be a martyr. The company was like an overgrown fangame house, and karma was fast approaching. It couldn’t come up with an original idea of its own and chose to burn in a blaze of glory. All for naught, however. Does anybody lament the loss of Data East? Is the world in worse shape? Oh, whatever will we do without another Bad Dudes?

But I’m not being fair. Sometimes, Data East would only steal to get the ball rolling. Like in Finding Forrester, Jamal copies the first paragraph of Forrester’s essay in order to find his groove. Ya know, start with a template then let the words pour out. You can often tell the moment when authors switch, though. A.I. was Stanley Kubrick’s final gift to the world, but Spielberg mucked it all up with his “Holy shit! Aliens!” finale. A Scooby-Doo ending would have been less jarring!

Anyway, we are introduced to Havoc, a good-natured pirate who finds a young maiden named Bridget washed up on the shore. She holds a map that reveals the location of the magical gem Emeralda and asks you to help hide it from the clutches of the evil Bernardo. She and your sidekick Tide managed to get captured anyway, so you must seek ’em out and prevent Bernardo from acquiring infinite power.

Havoc is supposed to be a seal, but if it weren’t for his very obvious flippers, I’d say he was Sonic in pirate garb. He’s blue and has got that stupid smirk on his face like he just let one rip and is pretending not to notice. It’s not clear what species Bridget is supposed to be, but she’s pink and hedgehog-looking just like Amy Rose. And the MacGuffin in this swash-buckling tale is a Chaos Emerald.

If you only play the first level of this game, you’d walk away thinking that this is indeed a high-seas reworking of Sonic’s 16-bit escapades. It’s Emerald Hill Zone from Sonic 2! There are big slopes and gravity-defying platforms and cliff edges that crumble in the exact same checkerboard fashion. There are springs that send you flying, treasure chests that act like Sonic’s item monitors, and even a ten-minute time limit in each level.

There are two major differences, however. One, you have a health bar instead of a ring counter. You collect gemstones that award extra lives for every 100 you find, but you gotta snack on meat sticks to refill your stamina. Two, Havoc is so goddamn slow. There’s a boost item just like Sonic’s sneaker power-up, but it barely makes a difference in your top speed.

You bounce off enemy’s heads, but if you want to attack foes in your line of sight or deal any damage to bosses, you have to push the jump button a second time to perform this weak-ass flipper kick. It’s so awkward — you can’t judge the proper attack distance without getting damaged yourself for at least the first twenty minutes of the game. Look at the box art above! Watch the intro cut scene! Captain Feathersword has got himself a cutlass! Do you get to use that in the game, ever, at all? No, you don’t.

It’s disgusting how many free lives you can score at the outset. You collect crowns worth 50 gems and 1-up dolls out the ying-yang — I had roughly 30 lives after intentionally killing myself a few times in that very first level! In fact, every time you respawn at a checkpoint, your timer resets to zero! No punishment for failure whatsoever!

Bad guys fall like timber; the first encounter with Bernardo could best be described as pitcher-position prison rape. I’m making this game my bitch and just cruisin’ like you know how we do, yeeeeeaaaaah boooooooyeeeeeee!

It was around the halfway mark that the difficulty began to rise as sharply as the snowy slopes I was scaling. There are these vanishing blocks that move in a marked direction one space before dropping, and you gotta hop from one to the other as you dodge flying mace balls. That’s not the nerve-racking part, though. That comes later when you have to hop up and down on a moving platform with a spinning roulette wheel that dictates where you go. Your progress is left up to chance, so you’re bouncing there like a fuckin’ chihuahua for five or so minutes, then you get the idea to screw the risks and take a leap of faith from wherever in space you are.

I can’t quite put my finger on it — perhaps around the time I was being chased by Fryguy from Mario 2 — but at some point the game stopped playing like a Sonic title. There were no more long stretches of ground to sprint across. Everything became about precise platforming and trial-and-error pattern memorization. Bosses turned into Zen Buddhist trials where your every flaw and failing is laid bare before you. Have you disconnected from the world? Have you achieved true enlightenment?

Maybe you should become a vegan. Go hiking in the Catskills. Stop showing up to your job and build a shack out in Mongolia. Maybe become a village shaman. Go on a spirit journey in the Outback. You don’t have to go that far if you don’t wanna. You can start at home with some self-reflection. Take up jogging. Hey… have you found Jesus yet?

Are you in control? Are you focused? Have you found your center?

It don’t fuckin’ matter. There is no way you can play this game and not want to visit a crowded space and start ripping out throats, MacGruber style. What happened? At what point did this game demand skills more appropriate for a Cave shooter? Did the lead designer’s wife leave him halfway through development and now he was lashing out at the unfortunate children who dared to dream and frolic and prance? This is not a humbling ordeal, it’s an emasculating one.

The final level is particularly mind-numbing. Flying crates that spawn out of nowhere come swooping in and smacking you off the airship. They barely let you know they’re coming. And poor you, your flipper kick doesn’t do shit to help. You may bust a couple here and there, but you’ll most likely be tasting wood splinters for the next year. Every move has to be calculated, every obstacle foreseen weeks in advance.

Then you fight Bernardo, the godmodding dick, who along the way learned how to summon meteors and shoot lightning from his ass. Where’s my sword? Don’t I deserve one? What kind of a pirate am I? This doesn’t seem fair! Oh, God, motherfucker went Super Saiyan with the emerald! Why can’t I become a Super Saiyan, huh?

I replayed that one level for about four hours! I even left the game on pause to eat dinner, take a shower, and clear my head! I finally beat the bastard, but there was no joy in victory. There is no reason for this game to be so hard. You don’t tease players with one thing and then just go in an extreme direction like that! This is how people develop hypertension!

Where’s my Sonic clone? Where did it go? That part actually wasn’t so bad. Bring it back, you assholes! You wanna make me cry? Do ya? Great! I’m crying now! You are horrible people! Bad, bad, mean, mean, meanies!

THE MEGA BLOKS SCALE OF SAME INTERLOCKING STUDS AS LEGOS: