I can’t do fighting games. I just can’t. How do you people manage this business? It’s nuts!

This clown over at NeoGAF argues that fighting games don’t really require memorization. Well, I just played Killer Instinct Gold for the first time over at my local game store and would ask him to kindly lodge a fight stick up his cornhole. On a related note, I finally know where that badass Eurodance song from Storm’s Adventures comes from!

Not counting the Smash series, Street Fighter II is the only fighting game I’ve invested time into out of a genuine desire to develop my skills. Just roll the D-pad and push a button and BAM! Instant awesome. The only technique I could never pull off was Zangief’s piledriver since it required you to do two full circles, file your tax returns, then sacrifice a goat.

It must follow that any game that plays similarly to Street Fighter II should hold my attention, the key word here being “should.”

Why, hello there, Data East! Haven’t seen you in a while! How have you been? Oh, that’s right! You went bankrupt and sold your shit to a mobile gaming company! That must have slipped my mind last time.

Fighting games were big quarter munchers in the early 90s, beacons for legions of pimply faced, Public Enemy-listening grade school punks. Companies that wanted to do fighting could go in one of two directions: the Street Fighter route or the Mortal Kombat route. Data East… Data East did both, actually. Maybe I’ll discuss one day.

So here we have Fighter’s History, such a wonderful game. So wonderful, in fact, that Capcom couldn’t wait to tell everyone in court how similar it was to its own wonderful Street Fighter II. The case ended in favor of Data East on the grounds that Fighter’s History was too generic to be infringing on any copyrights. Is that really something to be proud of?

What bothers me most about the game is the title itself, Fighter-apostrophe-s History. King of Fighters uses the plural form because it’s about determining a single champion among many combatants. Despite having a multitude of characters in its sequels, the original Street Fighter, not plural, is named such because you could only play as one guy in story mode. As far as I can tell, there is no chief protagonist in the Fighter’s History universe. It should be Fighters-apostrophe History, damn it.

I start the game and hear the title theme. Ya know, I swear it sounds familiar. Hear that layer of jingling bells under the main instrumentation? Isn’t that the same jingle at the beginning of the Street Fighter II theme, just slowed down a bit? I’m convinced! Aren’t you?

Let’s check out the “generic” cast, shall we?

Hello, Mizoguchi, the Japanese master who throws fireballs and can pull off a mean flying kick barrage! Hey there, Feilin, you delicate Chinese flower! Then we have Ray, rough-and-tough American with a wheel kick! There’s also Samchay, champion of Muay Thai! There’s Marstorius, the wrestler… of fuck me, you’re Zangief! All y’all can just blow me!

“Generic,” my ass! Almost every one of these cardboard cutouts has an analogue to a Street Fighter character. Even their selection screen profiles look like edited Street Fighter II portraits. Their movements, their attacks — everything screams “rip-off.” That shuffle, that little shuffle that Ryu does when he advances or retreats? Mizoguchi does the same thing!

The stages are just dandy. Fighting Mizoguchi atop a wooden bridge as the sun sets, your mind returns to that fateful duel against Ryu, that nostalgic melody playing in the background. Wait… or is this the music? And who did I fight over the river in that quiet fishing village, Blanka or Samchay? Great. Now I’m confused.

As my experiences bled into one giant pool, old and new swirling about, changing from a cornucopia of vibrant hues into one uniform shade of shit green, a funny thing happened. My fingers began to tingle as if to cue the resurgence of old muscle memory. Quarter-circle punch! Half-circle kick! Hold back then push forward plus heavy punch! Does it all work? Yes! Yes! It does! I remember now! My skills have returned! I’ve got this by the balls!

No, I don’t! What the hell is going on here!? Why are these CPU assholes blocking everything? I know I said I was bad at fighting games, but this is like the fuckin’ Iron Curtain! What difficulty level is this? Medium? This is the normal mode? This is a prank, right? And what’s that in the corner? A turbo setting? Yeah, I would in fact love to get my ass beat even faster!

Fine. I’ll swallow my pride and bump this down a notch. It’s still a bear, but at least now I can make a little progress. This setting is actually the third from bottom even though it’s called “easy.” There are seven settings in total. I never understood why some games needed so many degrees of variance. What’s wrong with just three? That seems to work out everywhere else.

Anyway, so I decided to pick Ray for my playthrough ’cause he’s all-American. This guy is so patriotic that he fights in front of the Washington, D.C. Capitol building. Funny thing about his stage is that over in the left corner, right by the main gate, is a lone trash can. The majesty of this historic landmark is marred by a single goofy waste basket. Why is it there? Must my mental image of the Capitol be forever tainted because some level designers just had to drop some destructible prop in the foreground?

I’m really not having fun with all this. I can barely pull of the specials, but what’s the point? My opponents are brick houses. On top of that, arm and leg reach is a total tossup! When I think they can’t touch me, they can, yet I can’t touch them! Your best bet is to do flying kicks and hope to smash their in.

One odd thing that happens every so often is a piece of the characters’ clothing begins to flash. If an attack connects with that spot, the character will become momentarily stunned. Big, honking weak spot, just like in Shadow of the Colossus. What doesn’t make sense is that some characters, like Marstorius, have weak points on their legs. When was the last time in real life that someone got a concussion from having their shins kicked?

Once you tear through the main nine fighters, you square off against the two bosses. As in the first version of Street Fighter II these guys aren’t available for play (there is a code to unlock them, however). Who are these guys? First up is the threatening, malevolent…

Clown. That’s it. Clown. That’s not a deceptive nickname, it’s what he is. That’s some brutal honesty, Fighter’s History! You have a roster comprised of nothing but low-rent clowns and then you unveil a literal one! Classy.

The ultimate villain is none other than… 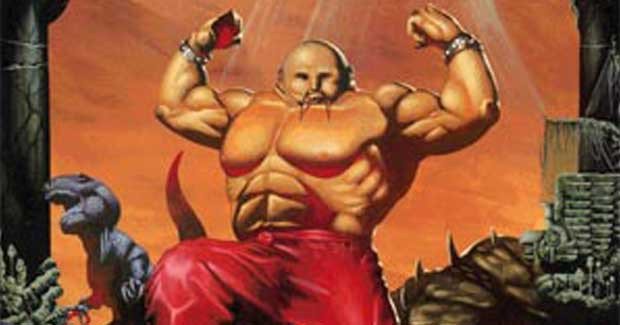 You remember him, don’t ya? From that one game? Awesome, right?

For those not in the know, Karnov is this fire-breathing strongman who starred in his own arcade game, but most would have likely played the NES port. He was Data East’s mascot, believe it or not. Not what you would consider typical mascot archetype, but you gotta admit he’s pretty badass. As this game’s big boss, he breathes fire and hops around and…

Damn. Why is he so short?

Now that I’ve taken a good look at him, who in the world thought he would be an iconic mascot? Think of other company mascots like Mickey Mouse, Bugs Bunny, Mario, Sonic the Hedgehog, Mega Man, or Pac-Man. They are all lovable, cartoony scamps who are incredibly identifiable. Who’s going to identify with a middle-aged Russian man who beats people up for a living? Popeye he is not!

He’s had cameos in several Data East games and always as a villain. Your mascot is a villain, Data East? That’s fucked up. I’m not going to say that this specific decision landed the company on the road to financial oblivion, but I’m just putting the suggestion out there.

Anyway, what happens when you beat the mighty midget Karnov?

What’s going on? You call this an ending? What a sweaty load! It’s just… oh. Ohhhhhhh! So it’s one of those games! Yeah, you know the ones! You can’t see the true ending unless you beat it on one of the higher difficulties!

So I tried medium once again, utilizing my newfound skills and knowledge. Guess what? Jack shit. I tried each character out but could never get past the first round. The first round! This is lunacy! There is no reason for such a huge spike in difficulty!

Enough of this. Fighter’s History is a miserable excuse at trying the copy the magic of Street Fighter II. If you are someone who has played and actually enjoy this game… no, you don’t. Not deep down. You have tricked yourself into consuming garbage and should be ashamed of yourself!

Your time is better spent with this.