The DS game that dare not speak its name

[Update: Sorry for the confusion everyone! As you said in the comments, the link below is actually for the sequel to Nanashi no Game and not for the original. Thanks for the correction!]

Nanashi no Game (The Nameless Game) is a trip back in time to when Japanese horror was a huge phenomenon around the world. Movies like The Ring and Ju-on: The Grudge were so popular that we even saw big-budget American remakes of them. A few games such as Siren and the Fatal Frame series really captured the aesthetic of these movies, but what makes this 2008 Nintendo DS title from Square Enix so unique and intriguing is the game within the game.

Things start in the real world with you spontaneously receiving a free game download on your handheld “TS” device. It’s a top-down adventure resembling a town area from an NES RPG. You walk around, talk to everyone, and eventually are sent back to real life. Seems harmless enough. But then you discover that everyone else who’s received this game has met a gruesome fate.

In real life, you learn all about the game’s developer and his family, exploring haunted places and dodging angry ghosts. In the cursed 8-bit game, you uncover more details of the family’s tragedy, as well as clues that may help you to survive in “the real world.” It’s this back-and-forth between the game and the game-within-the-game that makes Nanashi no Game so compelling. 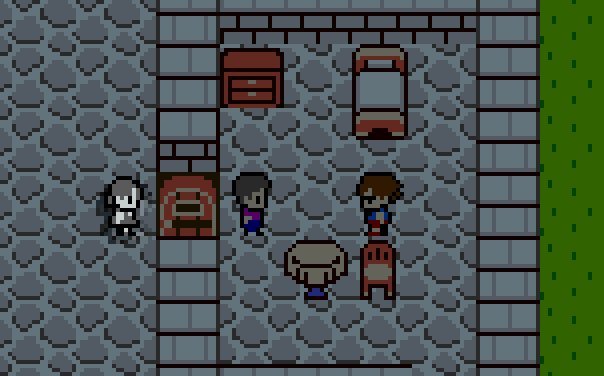 Unfortunately, Nanashi no Game never received a proper localization. The main reason is probably the DS itself — a system with rampant piracy, a glut of brilliant titles, and the fact that playing on a bus totally kills the spooky atmosphere.

Luckily for those of us who don’t speak Japanese, a group of fans put out an excellent English patch in 2011. There’s technically no legal way to patch the game, but if you do decide to emulate it or put it on a flash cart, you can ease your conscience by importing a Japanese copy.

You wouldn’t want to risk upsetting the ghosts, would you? Nothing makes ghosts grumpier than game piracy.