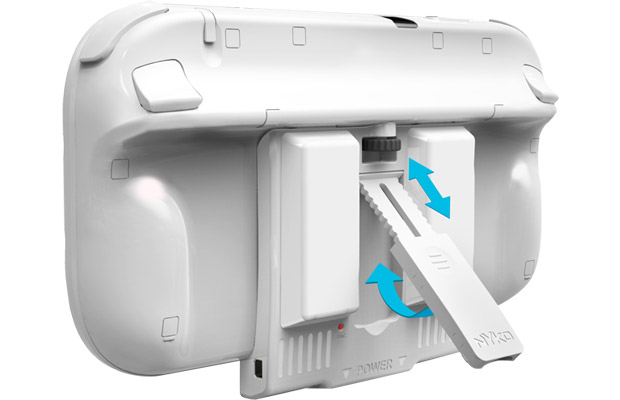 Details on the company’s 2012 line for Wii U

Nyko’s product line-up for the Wii U sounds surprisingly useful (well, some of it). The major accessory of the group, the UBoost ($19.99), clips on to the system’s GamePad and can “prolong playtime upwards of 10 hours.” It has a built-in stand and can also remain attached while the GamePad is sitting in its charging dock.

The manufacturer also shared details regarding its Charge Base Pro ($29.99), which can store and charge two Wii U Pro Controllers. Moving on, there’s the Power Stand for the GamePad ($14.99), the Charge Adaptor ($14.99), and the Charge Link ($14.99). Not exactly the most glamorous of purchases, but some of this stuff might be worth looking into. Have lengthy play sessions become an issue for you?

UBoost – Add 2x the battery life to the Wii U GamePad with this simple clip-on extended battery. The UBoost attaches to the back of the GamePad controller, with no tools or modification to the GamePad required, and works in conjunction with the internal battery to prolong playtime upwards of 10 hours. A built-in stand also allows for easy viewing of streaming content on the device with no dock required. Users can easily recharge both the UBoost and the internal battery of the GamePad with the GamePad AC adaptor included with the Wii U, and even place it in the charging dock that ships with the Wii U Deluxe. The UBoost is available later this year in both white and black for a MSRP of $19.99

Power Stand – Available in both white and black, the Power Stand holds the Wii U GamePad while also recharging the internal batteries of the controller. The stand utilizes the contact charging points on the GamePad allowing for easy drop and charge functionality.  The dock features an angled stand ideal for viewing movies and is powered by the GamePad power adaptor that ships with Wii U. The Power Stand will be available this year for a MSRP of $14.99.

Charge Adaptor – Charge the Wii U GamePad anywhere in your house with the Charge Adaptor. The Charge Adaptor plugs into any standard AC wall outlet, and quickly recharges the GamePad. The extra-long cord allows for easy charging even while playing your favorite Wii U games while the Velcro® strap provides an easy storage solution when not in use. The Charge Adaptor will be available in time for the Holidays for a MSRP of $14.99.

Charge Link – Conveniently charge the GamePad from the Wii U console or any other powered USB port with the Charge Link. The Charge Link’s extra-long cord provides the freedom to play while charging from the console and the Velcro® strap provides tangle free storage when traveling.  The Charge Link is the ideal way to power the GamePad when playing and is available now for a MSRP of $14.99.