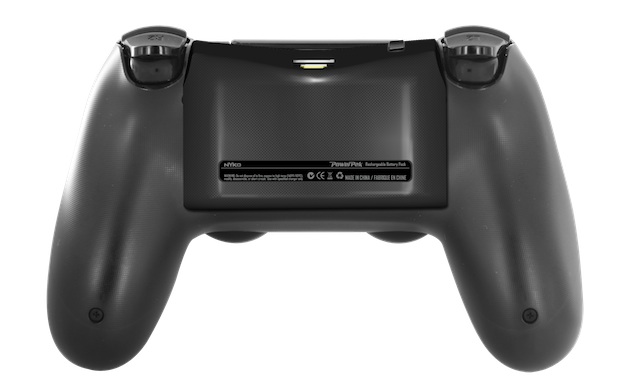 We met with Nyko today at CES to get a look at their first accessories for next-gen consoles.

The PS4 gets an Intercooler this spring, with the price set at around $25. Just like Nyko’s PS3 version, the PS4 Intercooler attaches to the system and uses small fans to draw hot air out and away from the system to keep it cool. This model plugs right into the back of the PS4 with a power passthrough feature, so no extra cables or connections are needed.

Both the PS4 and Xbox One get Charge Base charging docks. These let you attach a small dongle and then drop two controllers into the base for charging without the need for Micro USB cables. A low profile sled design lets you stash the whole rig right alongside your consoles in your entertainment center.

The PS4 gets a PowerPak that doubles the battery life of the DualShock 4. It attaches to the rear of the controller, interfacing through its Micro USB port. It adds a bit of thickness to the middle rear, but doesn’t get in the way of your grip. What’s neat is that the Charge Base dongle fits nicely onto the PowerPak, letting you charge it just as easily. The PowerPak is set to release this spring for about $20.

Finally, while not necessarily nex-gen, the Smart Clip lets you attach your phone to the DualShock 4. This new one lets you use your phone in both landscape and portrait mode, as some second screen apps only work in the latter mode. For games that do support second screen, this lets you use the feature without needing to put down your controller and pick up your mobile device.